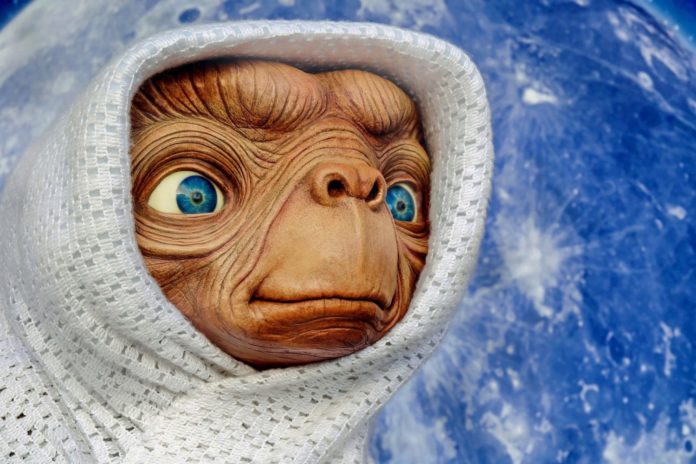 Like many of you, I have an insatiable itch to time travel and explore the universe. Don’t all children of the sun living in La La Land?  In the late 1970s, though, it became my life.

But first, I needed to eat.

Admittedly, I was out of sync with the “real world” when I entered adulthood. I had a dozen jobs by the time I was 20. And I took a gap year before entering college.

Strange things began to happen in my life. I looked up to the sky one day during my lunch break and witnessed a mid-air collision of two small aircraft. Shortly after that, on a camping trip at Bryce Canyon, I saw a man get struck by lightning. He did not survive. Burnt toast comes to mind, which reminds me of my career in corporate America over the next three decades.

E.T. in Hollywood and Pop Culture

Films featuring alien creatures from space seemed more realistic with improved special effects and big-budget releases. Movie audiences and the public warmed up to the possibility that humans may not be the only intelligent life form in the universe.

In the 1970s, I saw every episode of the original Star Trek television series in reruns, several times each. The Spielberg movie Close Encounters of the Third Kind (1977) left me breathless. The Star Trek television series returned when the original cast members reunited for the feature movie Star Trek: The Motion Picture (1977). I sprung up from my seat and screamed like a teenager at a rock concert when the title credit appeared. A few years later, I went to see Spielberg’s E.T. The Extra-Terrestrial (1982) on opening night. In a packed theater at Hollywood’s Cinerama Dome, I cried openly when E.T.’s fingertip glowed while pointing at the boy’s forehead, saying “I’ll be right here.”

The giant single-dish telescope built into a hillside at Arecibo Observatory in Puerto Rico collapsed last month. It was portrayed in the movie Contact (1985) as the site of the first discovery of life beyond our planet.

Unfortunately, during the summer of 1980, I sat alone in an empty apartment floating on a water bed I picked-up for fifty bucks. I was in Miami trying to breathe life into a failing first marriage at 19 years old (the same age my father married). The only thing that kept me sane was watching Carl Sagan’s Cosmos series on a console television I found upside-down next to the apartment dumpster. The knobs were gone, but it worked perfectly.

After my failures at being a husband and keeping a job for more than a month or two, I went back to college full time.

There are billions of planets similar in size and temperature to Earth that orbit suns like ours. Scientists call it the “habitable zone,” where conditions for life are favorable.

In the early 1980s, I was a college student studying Behavioral Science and Future Studies when I developed a proposal to construct a low-cost radio telescope capable of searching the universe for alien transmissions. I based my research on Dr. John Billingham’s search for extraterrestrial intelligence (SETI) design study, aptly named “Project Cyclops” because it consisted of an array of hundreds of parabolic radio telescopes in the shape of a “giant eye.” The goal was to search our galaxy for signs of intelligent life.

If extraterrestrial life did exist elsewhere in the universe, they would likely be capable of emitting radio waves that scientists can detect at greater distances than visual evidence using traditional optical telescopes.

Frank Drake’s famous equation was the first credible attempt to calculate the probability of intelligent life on planets beyond our solar system. The formula suggests the universe is bristling with life. There may even be more advanced civilizations than our own.

I was thrilled when Dr. John Billingham (“father of SETI”) invited me to meet with him at NASA Ames Research Center in Mountain View, California. I was 22 and I will never forget the day we first met on November 19, 1982. John had a great sense of humor; he was very personable. When I arrived, he graciously ushered me into his office.

But I was so full of self-importance that I was blind to another privilege that day: meeting one of the greatest minds of the twentieth century.

While Dr. Billingham and I discussed his current research with SETI, a brown-haired man of withered features entered his office in a wheelchair. They immediately took opposite positions of what appeared to be an ongoing debate over solar power’s future. The topic was beyond my interest at the time. I jumped into the conversation, trying to steer it back to the search for E.T.

Dr. Billingham argued that a ground-based system would be the next step in building a robust energy grid as part of a viable solar power energy program in America. The man in the wheelchair claimed that a megastructure of solar collectors in space would be far more profitable and, therefore, more likely to receive funding. It was a rather odd conversation for the early 1980s. They acted as if solar power collectors were about to be deployed next year.

Which scenario will “spark” the new age of limitless pollution-free energy? Solar collectors on our planet or in space? I didn’t care.

They asked for my opinion. I sided with Dr. Billingham, believing that massive solar power installations will likely be built on Earth first, then soon after will be assembled and deployed in space. The conversation fell silent. I had killed the room. I was wrong, of course (decades later, and still no large solar collectors in space). Although solar panels provide power for exploratory spacecraft, solar energy investments are still far more common in ground-based systems.

I thought little of my encounter with greatness until years later.

I began seeing his likeness on book covers such as A Brief History of Time, magazine articles, science conferences, and television appearances – all related to his genius. Only then did I realize that he was the most influential theoretical physicist since Einstein.

The man in the wheelchair was Stephen Hawking.

I met Hawking again years later and asked him if he remembered our meeting that day in John’s office. He responded in his SGD voice familiar to fans and admirers: “Many years have passed. You and I are still annoying.”

Pandemic Earth – A Day In the life

Today, I often attend lectures at Caltech (until the pandemic). Presentations about exploring giant caves below the surface of the moon fascinate space geeks like me.

Little has changed in my life. My passions are the same as they were in my youth. Since the pandemic, I now sit on the balcony to write with my black MacBook Air – a relief of Darth Vader I glued on below the glowing Apple logo.

My head is still buried in the stars.