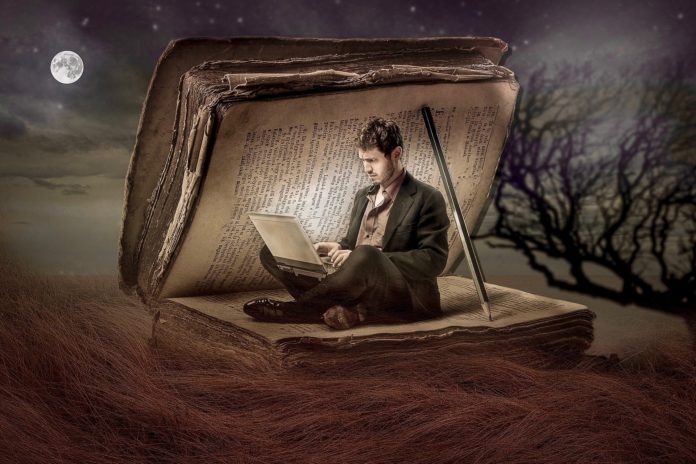 My publisher arranged for me to appear at the Duarte Festival of Authors on October 4, 2008, to promote my four regional history books. I met Ray Bradbury for the first time in the most unusual of circumstances.

My book signing table was sandwiched between two nationally known authors, the legendary Ray Bradbury and Gustavo Arellano, a feature writer for the Los Angeles Times who pens the syndicated weekly column ¡Ask a Mexican!

I brought a glass-framed poster of my new book, The Arroyo Seco, and mounted it on the partition wall that ran the full length of the authors’ signing tables.

Gustavo is a take-charge guy. He grabbed onto the partition to push it back to make more room for us. When he gave the divider a hard shove, it teetered on its base, and my poster broke free. I heard Gustavo say “timber” as it made contact with the back of my chair.

The sound of shattering glass was so loud it rang throughout the book festival. Ray Bradbury was stunned, his hand clenched tightly around a book-signing pen.

My chair, table, and floor were covered in shards resembling shark-tooth daggers, Ninja Star triangles, and thorns of death. All eyes were pointed at me like lasers. A few seconds passed that felt like forever. Then, as if Ray flipped the switch on himself, the festival of authors event turned back on.

Gustavo couldn’t have been more apologetic. He helped me pick up the shards and tiny glass fragments. I cheated death, escaping from what could have been a rather bloody gringo book signing. Imagine the headline: Day of the Dead for Regional History Writer Rick Thomas – This Year’s Book Festival Human Sacrifice.

I had the pleasure of giving Ray signed copies of my books during a visit to the Fremont Centre Theater in town where his plays were performed during his later years. When I served as a trustee at our public library, the board approved a mural to honor Ray for the meeting room that bears his name. Our library also maintains a sizable collection of his books and personal items, including a piece of his demolished home mounted on the wall. We feel blessed that Ray treated us like his family and that our city felt like a second home to him.

Today, public libraries thrive as “community centers” in neighborhoods and cities across America. They are considered essential gathering places, while retail bookstores have all but vanished since the dawn of the Internet. Some used bookstores still exist for those who enjoy ink on paper with a hint of mildew lightly salted with dust. Books are delicious. I love grabbing them by the spine and fanning their pages. Nothing compares to the joy of breathing in the fantastic journey I’m about to take.

Precocious. Rambunctious. Obnoxious. Curious. Chatterbox. The words that best described me as a child before my wallflower years. I drove everyone around me f’n bonkers. When I was first sent to my room – I didn’t know it at the time – I was about to begin my love affair with books. And by the time I reached puberty, I had practically moved the family bookshelf into my bedroom.

My parents foolishly assumed that sending me to my room was a punishment. Admittedly, I was an incorrigible repeat offender. Time-outs became so frequent that I soon found a way to adapt. I knew it was only a matter of time before mom would yell, “Time is up Ricky! You can come out now!” Next, dad would come marching down the hall to my bedroom, then swing open the door, and find me on the floor, using the bed as a backrest. My eyes were always glued to the pages of a book.

Whenever I was granted my release, I had permission to roam the house once again. My parents would even let me see my friend Susie, who had a trampoline at her home, and Buddy, who had a color TV and a swimming pool. I didn’t much care about that. My new friends were books, and they were no further away than my fingertips.

Ray Bradbury is my favorite author. As a kid, I read Something Wicked This Way Comes, Fahrenheit 451, The Martian Chronicles, and Dandelion Wine, and later on, The Illustrated Man and The Halloween Tree. In college (when I wrote my first screenplay), I read his book on writing, Zen in the Art of Writing – earmarking pages and highlighting sentences with a yellow marker.

Hundreds of books still cover my bedroom wall. They are always close at hand, both friend and lifelong companion. Thanks, Ray.