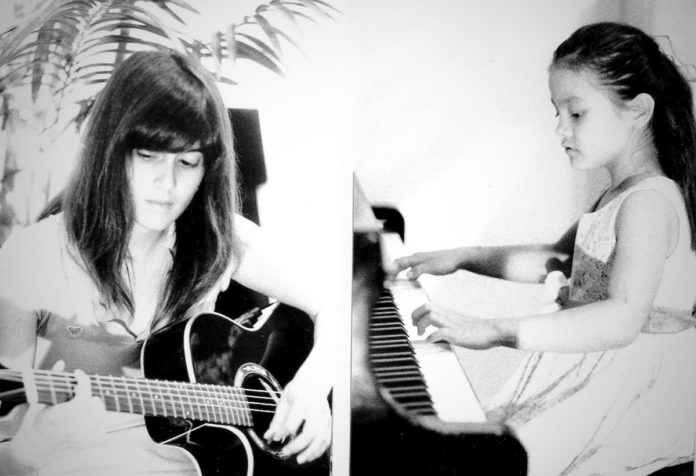 It’s BS to believe that talent or skill, or even intelligence, can be enhanced by playing Mozart music – or any other European “dead composer” works – to a baby. It may help put them to sleep though. I’ll tell you what does work. But first, allow me to introduce myself: I am the father of two musical prodigies.

I can’t talk about one without mentioning the other. My daughters, Lauren and Maia, are seven years apart from two different mothers and joined at the hip since Maia’s birth. They share an amazing talent for making music. Maia plays piano, saxophone, and can make authentic jazz trumpet sounds with her mouth. She wrote her first piece for piano at six years old, “The Mouse Gets the Cheese…WHAP!” Lauren plays any instrument with strings. She played at Carnegie Hall using her great-grandfather’s violin. She lives in the bay area and performs locally using a five-string electric violin with a guitar slung over her shoulder.

Both my daughters are gifted musicians and composers. I’m often asked: is their musical ability innate, learned, or both? When I shrug, I’m asked if I have any musical background or, maybe, my family. Yes, most definitely. My father.

My father played clarinet and sousaphone in the 1953 and 1954 Rose Parade with the Inglewood Boys Band (conductor Vesey Walker). He played tenor sax and clarinet in the High School dance band and played tuba in a German band for hire, “The Hungry Five.” In his later years, dad became a collector of automatic musical instruments and built a collection hall on his ranch to house them all.

While growing up, my father tried to get me to play the trumpet, but I hated practicing that damn oily-odor brass horn. He played a harmonica, banjo, and guitar on camping trips. At home, our living room was filled with record albums. The turntable was continually spinning in a walnut cabinet with stereo speakers that filled the room with jazz, musicals, classical music, and fifties rock-n-roll. I hated all of it, until, I listened to Ken Nordine’s Word Jazz albums. I played them repeatedly. Jazz music combined with Nordine’s voice-over fostered my desire for storytelling.

My father was disappointed when I said I wanted to quit playing the trumpet in Junior High. I was already writing music and short stories by then. Then he told me about his feeling of betrayal when his parents paid for piano lessons for his sister and not him. I felt like crap for letting my dad down. Still, I was relieved my lips and spit would never again touch a mouthpiece.

My father’s musical talent skipped a generation. He gave his father’s violin to my daughter Lauren and paid for Maia’s piano lessons until she entered USC Thornton School of Music.

Thanks, dad. I am fortunate you are still in my life, and you can see how much your genes and generosity has meant to my children.

A child with talent rarely blossoms without proper care and attention. My parenting “secret formula” is a mixture of the following ingredients: massive amounts of verbal interaction (genuine relating), listening, attention to detail, consistency, and finally, a wacky sense of humor to help stimulate the shy genius genes.

Parenting my daughters is a priority for me, and somehow, I managed to pay the mortgage on my income alone, and my wife became the stay-at-home parent. Imagine that? In the tax-you-to-death State of California, somehow, we managed. Sadly, it is increasingly common that both parents have full-time jobs leaving the bulk of daily parenting to a nanny or platoon-style “caretaker” at daycare.

I can’t say for sure that being a full-time parent explains how my daughters, with three different gene pools, excelled in academics and the arts. Like everything else, quality parenting is an acquired skill, and I am relentless in being a relevant parent in my daughters’ upbringing. I refused to be a “Disneyland dad” during my visitation while an ugly custody battle ensued. False claims of abuse were leveled at me during that time, but that only made me more determined to be the best parent I could be. I never gave up my desire to be an involved parent and refused to back off to protect myself from more false claims. The court dismissed the abuse allegations, and I was granted full custody of my eldest daughter.

My current wife of 24 years and I pay attention to the little things. We are both reliable and consistent facilitators. When our daughters became teenagers, suddenly, they knew everything there is to know about everything they deemed worth knowing. Yes, occasionally being a self-important teenager and young adult is a universal human condition. Fearless conviction. Idealism. The world suddenly turns black and white for them. There is no gray. It explains why revolutions are awash in their blood.

That was about the time we backed off a bit to give them some room – to be who they are meant to be. Your children will succeed if they are allowed to breathe. In a nutshell, I’m saying this: give the kid a break once in a while. They will pursue a life of passion, with or without you.

Parenting is an art. Every child is different. The “Secret Formula” for parenting talented children is your own dedication to the craft of parenting – the only thing you can control.

Next week – Raising Baby Mozart (Part 2). I’ll go into a little more detail about how parenting can influence your child’s natural talent.