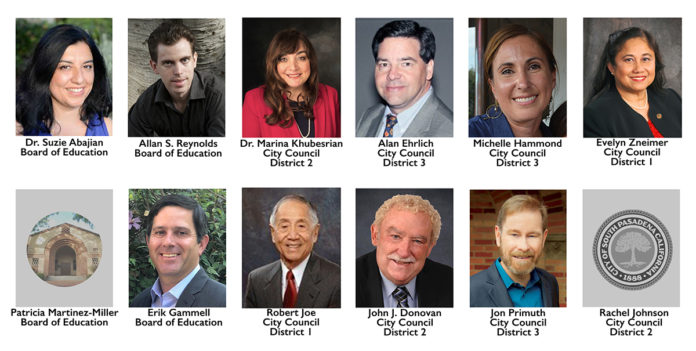 It appears South Pasadena’s 17,414 registered voters will have three competitive city council races to vote on this November. Since prospective candidates began pulling the papers needed to run July 13, eight persons have done so, and more are expected before the Aug. 6 deadline. Four others have pulled the papers needed to seek a seat on the city’s School Board.

The Council candidates must still file their completed papers and be formally qualified by the City Clerk and County Recorder. Assuming they meet all the requirements, two are poised to take on Council Member Dr. Marina Khubesrian in District 2, one will challenge Mayor Robert Joe for District 1 and three will vie for the seat being vacated by Dr. Richard Schneider in District 3.

It will be the first time these seats will be decided since the city was compelled to switch from city-wide to district-only voting. Below is a map of the districts.

Donovan raised a family of five in South Pasadena. During the 1990s, he served six years on the Parks and Recreation Commission including two as chair and is a former American Youth Soccer Organization commissioner.

Mayor Joe, also elected for the first time in 2011, will face Evelyn Zneimer, who has served as the city’s elected City Clerk since 2013. The expiration of Zneimer’s current term is in dispute, but it is in December of either 2021 or 2022. Under Measure C, which 60.5 percent of voters approved last November, Zneimer’s office will be phased out and converted to an appointed position. Joe was among the four Council members who voted to put Measure C on the ballot. Since the city was compelled to switch Council seats to district elections, the Clerk’s job was the only elected position in the city for which all citizens could still vote.

No information about Rachel Johnson was available by press time. In a statement, the City of South Pasadena told the South Pasadenan News digital copies of nomination papers it has issued won’t be available until Monday. It also noted that candidates have the option to fill out a form authorizing someone else to receive nomination documents and information on their behalf. It is unclear if that is the situation in the case of Johnson.

As with the Council candidates, none of School Board candidates had filed their papers as of 4:00 pm on July 23.

Although the School Board was also compelled to move to district elections, the change won’t take effect until 2022.

Prospective candidates have until Thursday, Aug. 6 at 6 pm to file.