On June 6, 2017, local filmmaker Monika Petrillo’s short film, WINK, won the Audience Award at Hollywood’s film festival, Dances With Films. It was a huge and pleasant surprise especially sweet given the hometown crowd in attendance. In June we covered the story of Petrillo filming WINK in its entirety right here in South Pasadena and how South Pasadenans came out for the screening at Dances With Films.

Since that time Petrillo has crisscrossed the globe as WINK has been selected at over a dozen film festivals and racked up prizes along the way. Among them, Most Innovative Short at the Hollywood Film Festival, Best Romance at Marina Del Rey Film Festival, Award of Merit at Global Shorts and the Audience Award at Dances With Films.

We caught up with Petrillo just as WINK is about to be screened again here in the Los Angeles area at the North Hollywood CineFest this Sunday, March 25, at 12 noon. So if you missed it in June, now is your chance to see this terrific little gem by one of South Pasadena’s own.

WINK’s lead actress, Caitlin Brandes, comes from a little town in Nebraska and lamented the fact that none of her family had been able to see any screenings so Petrillo decided to submit to the Omaha Film Festival. Lo and behold, WINK was selected and off they all went to Omaha where Brandes was able to finally share the film with basically her entire town! Petrillo ended up hitting the Beloit festival first and then went on to Omaha telling us, “I ended up going to all these places I had never been before and had the most extraordinary experience.”

After speaking at Brandes’ college, they drove out to her parents’ ranch where they have close to 200 cows. “Her Dad and her brother are like real cowboys” says Petrillo, “I got lucky because it was calving season and I got to be there for three births!” Two of those ended up being assisted births where the calf needed to be pulled out but one was natural and Petrillo was driven out to the pasture in the middle of the night to watch it unfold. She says, “it was nature at its best and just a really cool thing for me.”

Petrillo says that winning the Audience Award right out of the gate at Dances With Films was a real catalyst for the film grabbing the attention of several other festivals, one being the Bogota Short Film Festival. “When I found out I had been accepted to BOGO Shorts at first I was just excited to add the laurels to my poster and say ‘hey, International’ you know?” explains Petrillo. “Every time I told someone they told me I should go and the more I thought about it, I realized I’d always wanted to go to South America.”

Her father asked what she wanted for Christmas and Petrillo answered, “you only live once and this might be my best opportunity to get to South America and how much better to go with an invitation?” So off she went, alone, not speaking the language and says, “I will tell you I was 50% excited and 50% nervous.” She was reminded of her twenties when she traveled alone and said it was intimidating not knowing a soul, not knowing where to go, what to eat, what areas were safe, etc. But by dinner on the first day she found herself at a table with 8 other international filmmakers from Brazil and France and Croatia and she says the people in Bogota were “SO nice! So welcoming and would show me around and take me with them. Over the course of the four days not only did I see incredible films from all over the world but really got to discover Bogota.”

The film went over very well, so much so that they requested to screen it again at an outdoor event the following month. WINK was one of only six American films screened at BOGO shorts and Petrillo was honored and proud to be among the only three Americans to attend the festival.

Next up is the very exciting news that WINK is going to one of the oldest film festivals in America, The Cleveland Film Festival. Then it’s on to more festivals and eventually wide distribution. Petrillo is working on an idea for a feature film that she will write and direct and she says she already has actors in mind; and so begins another journey.

Read our review of this delightful film about a lonely and slightly repressed housewife who discovers an unusual way to spice up her afternoon(!) and get your tickets now for the Sunday screening at www.nohocinefest.com/shorts4 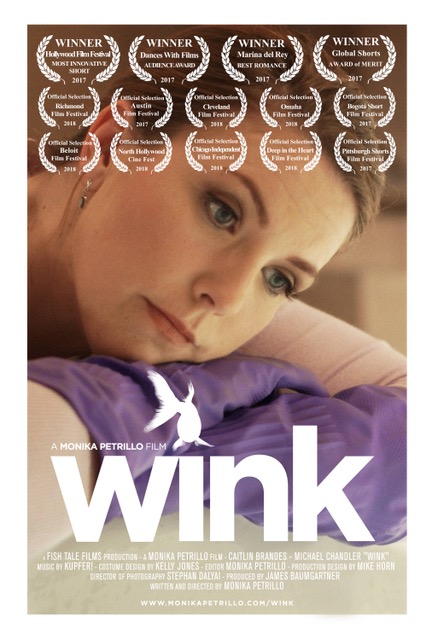 SPUSD Graduations | Schedules and Plans for All Schools in South Pasadena