Monika Petrillo was completely overwhelmed when her film, WINK, took the coveted AUDIENCE AWARD at the Dances With Films festival in Hollywood last night.

Says Petrillo, “It was so incredible! I completely lost it and I am certain that the wonderful crowd of South Pas friends at the screening made ALL the difference.” 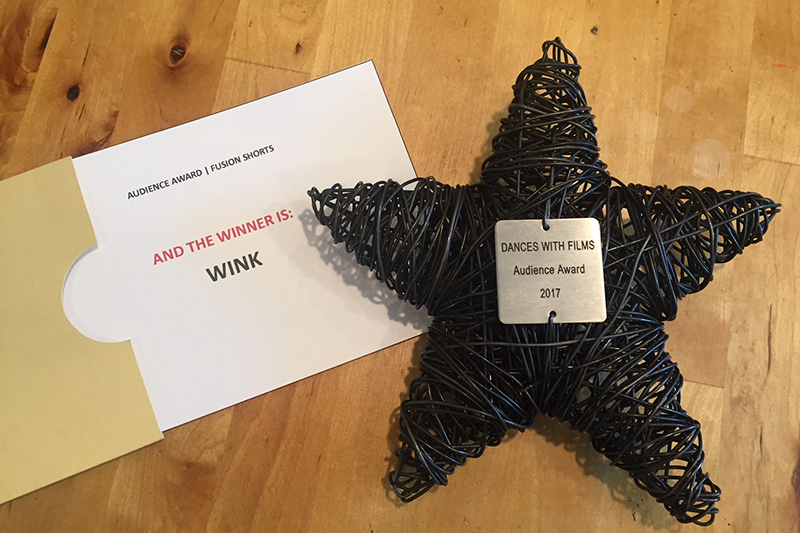 It was a festive night on the town when South Pas friends, family and neighbors came out in force Tuesday night for Monika Petrillo’s screening of her new film WINK at the Dances with Films festival in Hollywood. The making of the film was a true South Pas collaboration that you’ve got to read about here. In keeping with the “all in” camaraderie, South Pas friend and photographer, Shari Correll, was there to document it all.

Petrillo, looking beautiful in a midnight blue, lace dress enthusiastically welcomed everyone with a huge bear hug and a smile that just wouldn’t quit! She could be heard throughout the evening saying, “I can’t believe it! Dream come true!” South Pasadenans were joined by the actors, crew, the press and other audience members. WINK was screened along with five other short films, each having their own cheering section. I am proud to report that the South Pas crew was among the loudest. But, truth be told, Petrillo’s film was popular with the whole audience, so hey, fingers crossed for the audience award among others!

Asked about her emotions after the screening and Q&A, Petrillo said, “Honestly, I felt quite nervous before the screening. But then I saw my friends from South Pasadena pour into the lobby, and I immediately relaxed. Watching your film projected on a huge screen in a theater with 250 people is an exhilarating feeling. But it was hearing my South Pas friends giggle and cheer in the audience that gave me real confidence and made me feel good in my heart. I am so grateful to every single one of them who came. It meant so much to me!”

And giggle they did (I’m looking at you Samantha Montes!), especially when the film takes an unexpected turn. After a wonderful audience reception and Q&A, the gang gathered at Cabo Wabo Cantina in Hollywood & Highland for dinner, margaritas and celebrating. Congratulations to Monika on the success of her film premiere. We will be watching to see where WINK goes!