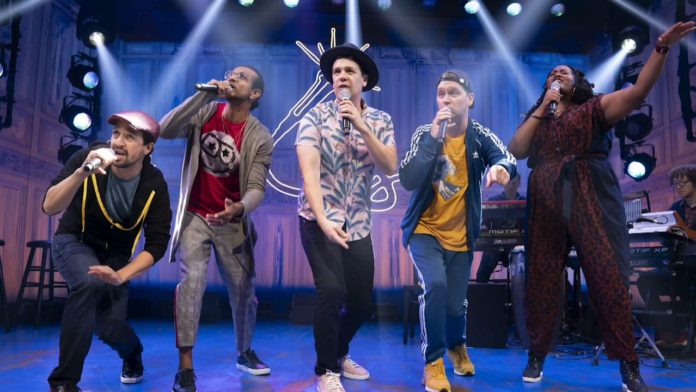 We Are Freestyle Love Supreme | The streaming service Hulu debuts its documentary about Freestyle Love Supreme, the improv hip-hop group whose notable alums include Lin-Manuel Miranda, James Monroe Iglehart, Christopher Jackson, Daveed Diggs and Thomas Kail (who directed FLS’s Broadway run last year). Filmmaker Andrew Fried started documenting FLS performances back in 2004 so there should be a wealth of nostalgic material to draw on. Hulu costs as little as $6 a month; if you don’t subscribe already, the first month is free.

What’s on at the National Theatre? Music, Power, Jealousy. Welcome to Vienna. Wolfgang Amadeus Mozart, a rowdy young prodigy, arrives determined to make a splash. Awestruck by his genius, court composer Antonio Salieri has the power to promote his talent or destroy it. Seized by obsessive jealousy he begins a war with Mozart, with music and, ultimately, with God. Peter Shaffer’s iconic play had its premiere at the National Theatre in 1979, winning multiple Olivier and Tony awards before being adapted into an Academy Award-winning film. This innovative 2018 production is directed by Michael Longhurst and stars Lucian Msamati as Salieri, with live orchestral accompaniment by Southbank Sinfonia. Amadeus is streaming through Thursday July 23 at NationalTheatre.org.uk

Puccini’s La Bohème streams at MetOpera.org on Sunday, July 19 for 24 hours. As classic as opera gets: the most-performed work in Met history, in Franco Zeffirelli’s beloved staging, documented in a 1982 telecast that stars four Met legends: Teresa Stratas, José Carreras, Renata Scotto, and James Morris. An archetypal tragedy filled with gorgeous and deeply affecting music, Puccini’s timeless tale of love, camaraderie, jealousy, and loss in the garrets and cafés of bohemian Paris has reliably enchanted audiences and left them in tears since its 1896 premiere.

Streaming now through July 30 for the Stratford Festival in Ontario, Canada is a delightful production of Romeo & Juliet. Falling headlong in love, two teenagers defy the long-simmering hatred between their families. But daring to love one’s enemy comes with a terrible cost, as the needless sacrifice of young lives brings this heartbreaking love story to its tragic conclusion. Available at StratfordFestival.ca/AtHome. Check listings for more offerings as well as past productions to purchase on demand or DVD.

Live With Carnegie Hall presents Audra McDonald premiering Thursday July 23, 2pm ET.  The six-time Tony winner will be joined by musical director Andy Einhorn to showcase new repertoire selections and speak with Mo Rocca. “Music has the undeniable power to comfort, uplift, connect, and inspire. In response to this unprecedented time, we invite you to join us for an entirely new online series: Live with Carnegie Hall. Tune in for unforgettable episodes that feature some of the world’s finest artists as they share behind-the-scenes stories, excerpts from past performances, and live musical moments.” – YouTube.com/CarnegieHall

AlvinAiley.org presents City of Rain. Camille A. Brown calls her dance language “jambalaya” because she draws from so many different styles and inspirations. This quietly intense work honors the struggles and grace of losing a friend. In revisiting the piece nine years after its premiere, Brown made changes to reflect both these particular dancers and her own artistic growth. Available to stream July 16 – 23.