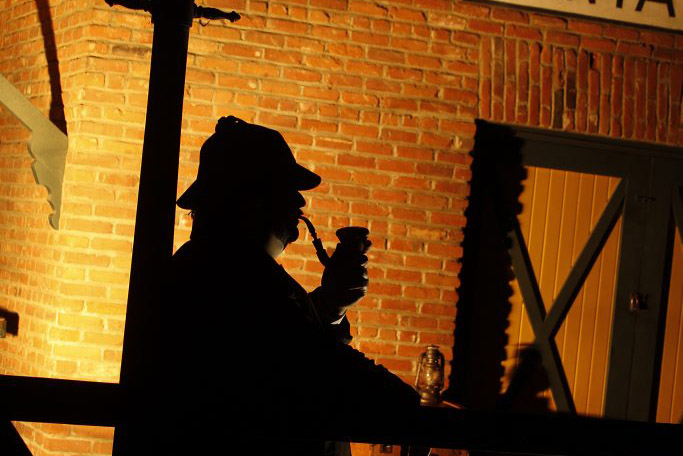 Unbound Productions Executive Director Jonathan Josephson, Artistic Director Paul Millet, and Producing Artistic Director Jeff G. Rack have announced the details of the company’s first fully-realized evening-length play: Holmes, Sherlock and The Consulting Detective, which will run for 19 performances between June 2 and July 1, 2017 in and around the historic Santa Anita Train Depot at the Los Angeles County Arboretum and Botanic Garden (159 S. Baldwin Ave, Arcadia, CA 91007). The 105-minute. two-act piece will be staged as an immersive theatre event and is the first Mystery Lit production from the creators of the popular Wicked Lit series. The development of the play was originally supported with an Individual Artist Grant from the Pasadena Arts Commission.

“This is an extremely exciting time in the life of our theatre company,” said Josephson who also wrote the play. “The piece has been in development for several years and after staged readings at the Pasadena Central Library, The Huntington, Sherlocks in Brentwood, and last November’s event at the Arboretum, we’re thrilled beyond words to share this fully-realized show with our audiences.” 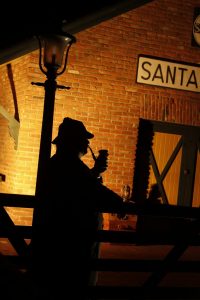 A highly theatrical piece, Holmes, Sherlock and The Consulting Detective will feature 12 actors playing upwards of 25 different characters. Audiences will physically follow three different plots through a literary labyrinth of clues and misdirection in a story that features Sherlockian mainstays, new characters, and a host of theatrical surprises.

“This is the beginning of what we hope becomes a tradition of bringing theatre to our landscapes,” said Richard Schulhof, CEO of the Arboretum who was first introduced to Wicked Lit and Unbound by Arboretum Board President Dan Foliart in 2015. “I have been very impressed by the work that this rising company has created and its ability to reimagine great literature with moving, living performing art is something I feel our members and broader community will truly enjoy.”

The mission of Unbound Productions is to create immersive, theatrical adaptations of timeless stories.

In 1970, an abandoned train station was moved from its original location a quarter mile north of the Arboretum and restored to look as it did when it was first constructed by the Atchison, Topeka and Santa Fe Railroad in 1890. A typical half-passenger, half-freight depot with living quarters upstairs for the agent and family, the Santa Anita Depot was an active local station stop for both Baldwin Ranch and nearby Sierra Madre residents. The Depot could not be moved intact, but all 100,000 of the original bricks were removed from the station as well as salvageable doors, trim, beams and even the picturesque Depot balcony. The Santa Anita Depot of today has been re-furnished with turn-of-the-century housewares and period railroad equipment to recreate the ambiance of the bustling station stop it once was. Visit the Arboretum’s website for details about guided tours of the Depot.

SCHEDULE VARIES FROM WEEK TO WEEK – SEE WEBSITE FOR DETAILS

Tickets range from $40-$60
Members of Unbound Productions and the Arboretum can save $5 on tickets!