Enjoying a day of golf, potentially winning one of many raffle gifts, a tasty lunch and helping a good cause are reasons enough to take part in the South Pasadena Tournament of Roses (SPTOR) Golf Tournament.

Yet, the opportunity to cash in big and walk away with a huge payday will make the annual tourney, slated for June 15 at Arroyo Golf Course in South Pasadena, extra enticing.

Creating plenty of buzz for the event is the opportunity to walk away with $10,000 after sinking a hole in one on a designed 3-par hole on the course. Mama’s Brick Oven Pizza is sponsoring the par 3 hole.

Proceeds from the event will help support the city’s self-built float, constructed entirely by volunteers.

Organizing this year’s tournament are co-chairs John Vandercook and Alan Vlacich, a pair of SPTOR board members, who are putting in long hours to ensure a successful event. They’re encouraging members of the community to support the city’s float in the annual Rose Parade by registering in advance for the scramble best ball tournament in order to save.

Day of event signups begins at 7 p.m., followed by a shotgun start at 8 a.m.

“This is 25-plus years for the tournament,” said Vandercook, noting that proceeds will help pay for steel and flowers when construction begins soon on the city’s 2020 entry in the Rose Parade – given the theme “Victory at Last” – scheduled to roll down Colorado Boulevard January 1 in Pasadena. The city’s float highlights the 19th Amendment to the U.S. Constitution granting American women the right to vote, ending almost a century of protest.

The tournament, which raised approximately $8,000 a year ago, has been going on for so long that Vandercook explained kids who once played in it with their dads are now showing up to play as adults with their own children.

“It’s just a fun family event and it helps a longtime organization in town – The Tournament of Roses,” he said. “People are wonderful in wanting to support our float.”

The event includes 18 holes of golf on the pitch and putt course, lunch, awards, a raffle and that big cash reward for the shot of the day.

Vandercook and Vlacich are also looking for persons or companies to sponsor tee signs.

Gold sponsors at $700 are being sought. At that level, sponsors receive green fees for eight persons, eight lunches, and 12 raffle tickets. The sponsorship also includes recognition in brochures and signage.

Make checks payable to: SPTOR, and send to 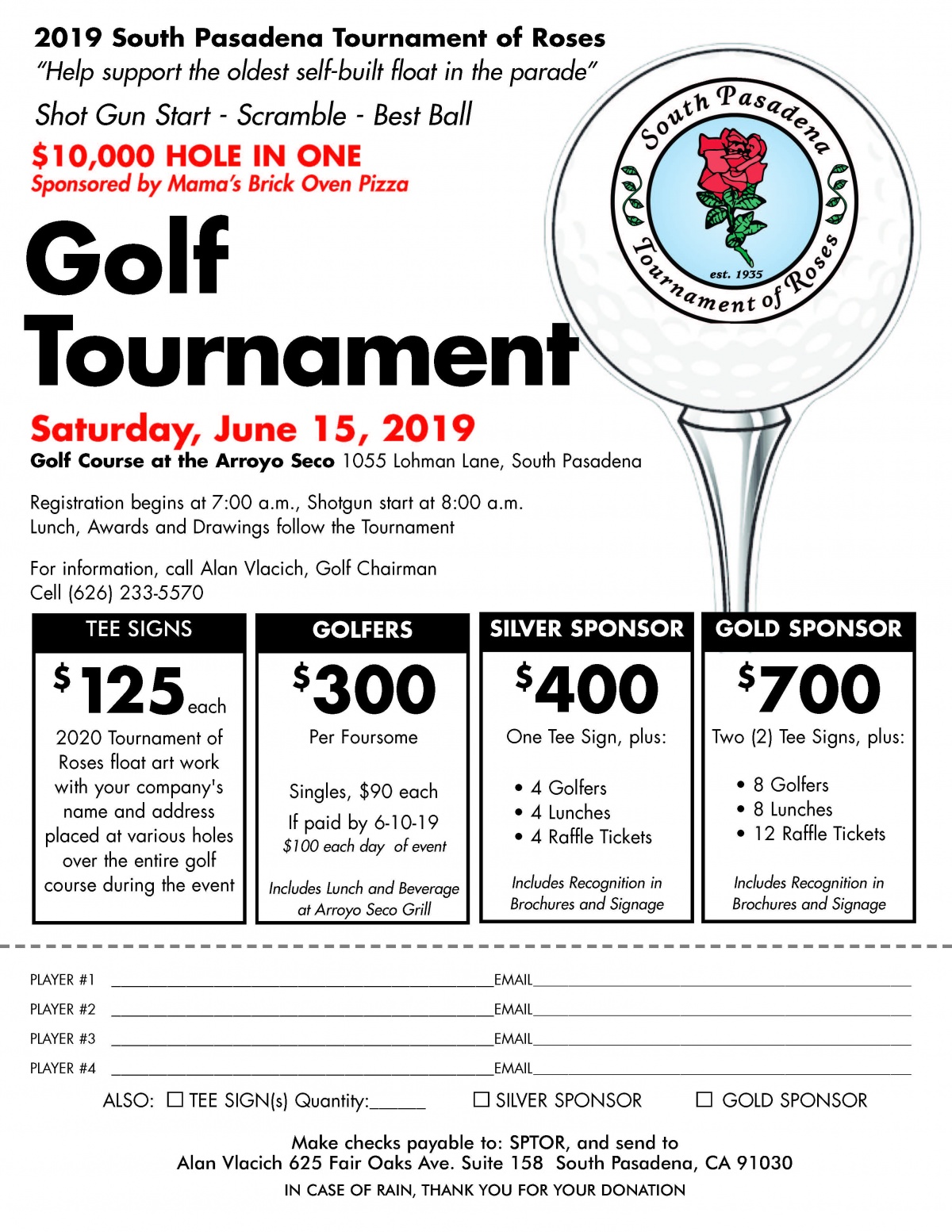