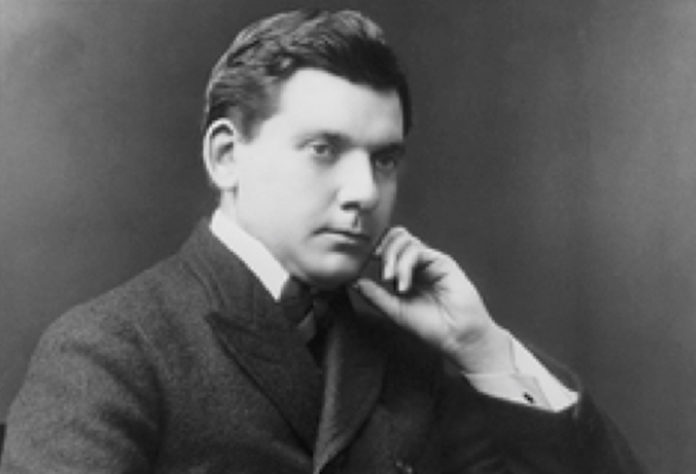 Who is this guy? The young man in the photo is Irving John Gill, an architect born in 1870 to a Quaker family in Tully, New York, where his father and brothers were building contractors. After a scant few years as an apprentice draftsman in Syracuse, NY and Chicago, most notably at Adler and Sullivan, Gill boldly moved to San Diego in 1893 to make his mark as an architect. It took him about a decade before he was able to persuade well-to-do clients to commission projects he wanted to build, radically simplified Cubist structures with pure surfaces, unadorned by architectural ornamentation.

Because Gill’s innovative modernist work, 1908 -1915, preceded the celebrated early modern work in Europe of Adolph Loos, Le Corbusier, and the De Stijl group, Irving Gill easily deserves recognition as the father of modern architecture. His passion for simplicity and clean lines and surfaces also laid the groundwork for Mid-Century Modernists in Southern California who came along about 20 years later, including Richard Neutra and Rudolph Schindler.

What did he do? According to one esteemed critic, Esther McCoy, Gill “…developed one of the truly original styles of architecture in the United States.”  Especially interesting to Angelenos, we have one of Gill’s premiere architectural achievements, the Miltimore Residence, right here in South Pasadena.  Architectural historians generally point to the years between 1910 and 1915 as representing Gill’s Classic Period. Built in 1911, this home on Chelten Way in South Pasadena not only exemplifies Gill’s pioneering design genius, but also embodies most of his structural innovations: its thin-wall construction as a way of making homes more fire-resistant; its visionary use of steel to strengthen resistance to earthquakes; and its interior simplicity making it easier to clean and sanitize.

Why celebrate his birthday? Although most architects and many preservationists are familiar with the significance of Gill’s work, most would likely agree that his architectural achievements are not as well- known and perhaps are underappreciated by the general public.  With 2020 being Irving Gill’s 150th birthday year, and with the Miltimore residence being one of the highlights of his life and career, now is the ideal time and South Pasadena is ideal place to celebrate.

As Los Angeles Conservancy’s consistent recipient of their top (A+) grade for our preservation infrastructure, we have a tradition to uphold.

When will it happen? We had planned to celebrate it on May 3rd, but postponed the event until the good times rule. At this point it’s impossible to pinpoint a date for the rescheduled event, but even if we need to wait a year or more to remount the gala, guided tours, gourmet luncheon, and live and silent auctions, it will be worth the wait. We are working with partners, sponsors, caterers, and event planners to make this gala our best event ever.

Where do we get tickets? You will be able to make reservations on our website sppreservation.org as soon as the event is rescheduled. Actual tickets are unnecessary (they might be misplaced or stolen). Online reservations are the most secure way for you assure your participation and let us know you are coming.

How can I help? We can always use help with many aspects of our events. For the Gill Gala, it might include: handing out programs; serving the gourmet lunch; parking cars; assisting with tours of the Miltimore residence; issuing auction credentials, or being an auction “bid spotter.” It’s fun, and a great way to be part of the gala at no cost to you. Assigning volunteer jobs is handled on a ”first come, first served” basis. If you wish to be on the list, please email your name and preferred volunteer job to mgallatin@prodigy.net You can get on the volunteer list even before a rescheduled date is confirmed. If you are a high school student you might be able to earn community service credits.