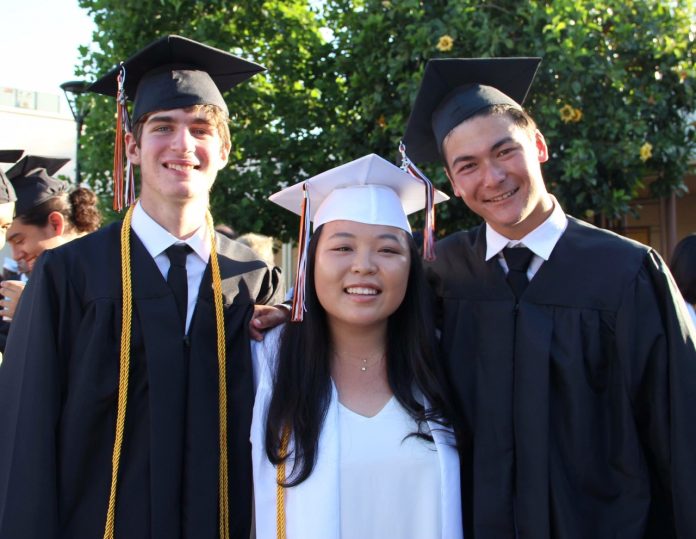 It’s 90 degrees outside at 4:30 on a Sunday afternoon as I roll up to the Auditorium of my Alma Mater. Friends and family are already clamoring to queue up as others choose to seek out the shade. Finally the doors open and the crowd floods in to take their seats, eager to grab the best spots possible. As the lights dim the ubiquitous ‘Pomp and Circumstance’ begins playing and the Class of 2017 funnels down the aisles, 2 by 2. With the soon-to-be-graduates seated and a warm welcome by Chairperson, Anissa Santos, the ceremony has officially begun.

To start off the performances was an amazing rendition of ‘Jolene’ by Dolly Parton, played exceptionally well by Jayda Weeks. The crowd’s silence was palpable as only the tremendous sound of her voice and piano hauntingly swept through the auditorium.

Next was a wonderfully odd, yet heartfelt speech given by Sophia Lopez titled, ‘Hummus’. With a tongue-in-cheek attitude she told of her father including hummus at a dinner and adding finishing garnishes; drizzled olive oil, sprinkled paprika, the works. As Sophia continued with her story she explained that she never really liked hummus, but there was a certain way that her dad made it, that it had a distinct flair. But hidden within this story was a poignant metaphor for life as she concluded her speech encouraging her peers “To add hummus to everything. You must execute everything with passion” and to, “…keep adding that extra olive oil.”

With wise words from an old soul stewing in everyone’s brains we were treated to a stunning dance routine by Grace Privett-Mendoza and Thomas Moreno, set to the song ‘Elastic Heart’ by Sia. The chemistry between the two friends was undeniable as they so gracefully conveyed feelings of joy, sorrow, and ultimately, love.

Hoyt Gong followed with ‘Bedtime Stories’ a speech he had written about the loss of childhood but the gaining of new perspectives. He spoke about a story his mother told him, of a mother dandelion and her large patch of specklings. “The mother dandelion would tell them there was an entire world outside of their own. But as a strong wind blew, one speckling was still clinging on, unwilling to let go. But the mother told him that this was his moment.”

Hoyt continued that after his own mother told the story, “I remember crying in her arms… I was so reluctant to leave, yet so ambitious to see the world. That one day seemed so far. The gust of wind is now here, right before us. We will miss our bedtime stories” The gust of wind carried us over to Matthew Kye and Christy Yu’s cover of “Officially Missing You” by Tamia. The duo’s harmonies and gestures embodied a fitting choice of song for such a bittersweet occasion.

Next was a very special keynote address from two- time Olympic medalist/ hurdler/ singer, Shevon Stoddart. She spoke about her time spent feverishly training to become the accomplished athlete that she is today; the sacrifices made, the diligence required, the passion it takes and that “Your standard is your standard.” Shevon next gave everyone an unexpected surprise by singing an unreleased single that she had written, ‘Why Don’t You See’. With a powerful chorus that sung “ Why don’t you see, there’s no reason to hide what you have inside…”, Shevon explained that the lyrics were inspired by the amazing students that she worked with in the track program at SPHS.

Not everything goes according to plan though, as Shevon then described the kind of sacrifices that we must take sometimes to be the person that we want to be. She did not participate in the Olympics one year in order to help her boyfriend, an Olympic jumper, rehabilitate after a serious spinal cord injury. But even though she missed out that year, something more meaningful happened as she saw her love fight against odds saying there was only a 30% of recovery and beating them. That moment in her life is a reminder to her and to many others that if you put your mind to it you truly can accomplish anything. She closed her address with the concisely elegant statement, “ Hurdle through the obstacles.”

Finally, a solo performance of Natasha Beddingfield’s ‘Unwritten’ was masterfully played by Cindy Tsai. As her voice hit the crescendos so did the audience’s cheering and applause, as her energy was infectious. Katherine Conte closed out the ceremony and encouraged the class to sing the Alma Mater “for the second to last time” Though admittedly years after graduating, those lyrics still stay ingrained in your mind, as I involuntarily began chiming along.