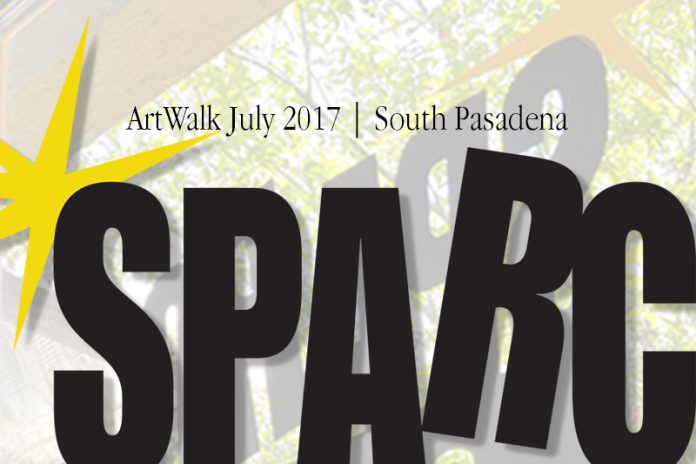 SPARC Music Stage @ Arroyo Outdoor
The South Pasadena Arts Council is pleased to present the following music groups at Arroyo Outdoor, 915 meridian Ave, next to the Iron Works Museum and the Gold Line Station for the 2018 Eclectic Music Festival;

The Skylarks are a Los Angeles-based band residing somewhere between the Folk Rock, Americana and Alternative Rock genres. Their uniquely American sound is rooted in vibrant guitar rhythms and poetic lyrics that paint open-road pictures through the lens of the Western U.S. Sam Mellon, founder and songwriter for the Skylarks since 2005, is known for his atmospheric songwriting and spirited arrangements that thrive without flash or pretension. The unique sound of the Skylarks creates an open landscape for Mellon’s songwriting with haunting ambient guitar tones, groove-soaked rhythms and elegant vocal harmonies. The Skylarks make the most of every note and lyric; the effect is a rich sound that draws influence from just about every corner of music.
The Skylarks’ 4th full-length album, “On the Back of the New,” is scheduled for release in the spring of 2018.

The Blue Hawaiians meld surf rock with elements of exotica, jazz, and psychedelic rock.
It’s Roy Orbison meets The Ventures meets The Doors. The Blue Hawaiians are a surf-rock group from Los Angeles. They formed in 1994 to play at the opening of their friend Michelle Marini’s club, The Lava Lounge. An underground sensation, The Blue Hawaiians have played Hollywood’s Palladium and The Derby, the Sunset Strip’s House of Blues, Roxy, and The Viper Room, and Santa Barbara’s notorious club The Wild Cat. The band has been heard on the TV series “Friends”; the compilations Pulp Surfin’ and Shots In The Dark; the documentaries “History Of Rock & Roll” (BBC) and “In Search Of Da Cat” (PBS), based on the life of surf legend Mickey Dora. They also scored a CLIO-winning GUESS? Jeans commercial featuring Juliette Lewis, Harry Dean Stanton, Peter Horton and Traci Lords. They have also provided music for the hit cartoon series “SpongeBob SquarePants” on Nickelodeon. Current band members include: Mark Fontana, Mark Sproull and Gary Brandin. Called by some critics “the best tiki/lounge band on earth,” their music ventures beyond happy hour and into the moody and dramatic, with a touch of mysterioso.

Upstream has been spreading their message of love and positivity through their exhilarating Caribbean Music, namely, Reggae, Calypso, Soca and Steel Drum Music, for quite some time now. Through the years they have mesmerized audiences throughout the world and brought ultimate enjoyment to all. With a multi-talented line up of some of the most experienced and enlightened musicians in their camp, they continue to spread joy to an unsuspecting public.  Bandleader and Lead Singer/Guitarist “Haile Blackman” is originally from The Republic of Trinidad & Tobago and the Son of the Legendary Creator of Soca Music, the late Ras Shorty I. The band boasts a very seasoned and celebrated line up: “Derek Brewstafari” Steel Drum Extraordinaire is also a Trinidad and Tobago native and will tug at your heartstrings with his melodic Steel Drum tones. John McKnight (Bass, Trombone, Keyboards, Guitar, & Background Vocals) Adam Arredondo (Keys & Background Vocals) and Mark Spiller (Drums & Background Vocals) complete the stellar crew. Upstream currently has eight CD’s available. Their discography is as follows: “Upstream”, self-titled CD release in 1995, “Life” released in 2000, “Jump to the Rhythm” in 2001, “To Da Maxx” and “Pick Up Yourself” in 2007 “21st Century Live” in 2013, and most recently “Here, There and Everywhere” and “Steel Drum Session Vol. I” in 2014. A new collection of songs will be released before the end of 2017.

Maggie Szabo is a Canadian singer-songwriter who has been winning over audiences worldwide with her stunningly soulful vocals and empowering pop anthems. Hailing from small town Ontario, Szabo is now an accomplished musician living in Los Angeles and is using her music to conquer social injustice.
After quickly becoming one of the most sought after songwriter/vocalists for DJs and notable film and TV placements, Szabo’s latest work has focused primarily on her solo project and was written in some of the most beautiful and exotic places on earth, including Greece, Amsterdam, London and Thailand.
Szabo’s successes to date include over 13 million views on YouTube, extensive media coverage from high profile outlets such as Perez Hilton, Yahoo Music!, PopCrush and Huffington Post, as well as being featured on multiple airline playlists and numerous notable film and TV placements. She recently was the featured vocalist on the album for German electronic DJ Schiller, who has so far sold 7 million albums worldwide.

The SPARC Gallery is pleased to present an exhibition of the work of Los Angeles-based artist Carolie Parker at 1121 Mission Street at the South Pasadena Chamber of Commerce,
April 16 – May 14, 2018. Artist Reception: April 21, 6-8 pm

Frame Story is named for a traditional literary device in which a group of related stories are told within the context of a larger story. This format of a “story within a story, first popularized in the late Middle Ages, can be seen in such collections as Boccaccio’s Decameron, Chaucer’s Canterbury Tales and the ancient folktales compiled in The 1001 Nights.

The formal elements in Carolie Parker’s works draw a on similar regulating principle: the repetition of geometric shapes within a layered format where motifs reoccur in slight variations through the series. An exploration of translucent color reflects the artist’s interest in the Muslim tile designs of Andalucia, which in turn bear many similarities to the reoccurring motifs in works like The 1001 Nights. “To make the paintings,” Parker notes, “I work in layers, starting with collaged or recycled paper squeegeed with color. The second layer is a watercolor shape, which is poured onto the surface. Each piece is finished with a patterned overlay, printed either in silkscreen or with a template.”

The actual shapes of color in Frame Story are suggested by the commercial and domestic architecture of Los Angeles, which comes in often predictable box-like forms overlaid with a range of decorative touches; Mexican, Tuscan, Norman or Tudor. Parker transform this vernacular into images of great formal elegance in the same way that stories like The 1001 Nights draw on inherited folk traditions, weaving them into luminous tales of magical change and adventure.

Carolie Parker is a visual artist and writer with a background in foreign languages and world literature. She was recently a MacDowell Fellow (visual art and poetry) and a Visiting Artist at the American Academy in Rome. Her poetry has appeared in Trickhouse, The Denver Quarterly, NOW culture, River Styx Magazine and Poor Claudia. She has exhibited visual work at PØST, The Armory Center for the Arts, BLAM and Edward Cella Art and Architecture (all Los Angeles). Mirage Industry, a book-length collection of her poetry, is just out from What Books Press in Los Angeles. She teaches Humanities and Art History at LA Trade Tech (LA Community College District).