The Restoration Committee of the South Pasadena Friends of the Library will be presenting the next Restoration Concert on Sunday, May 22, 2022 at 4:00 p.m. featuring our quartet-in-residence, The New Hollywood String Quartet with guest pianist, Bernadene Blaha. The program will be the Franck Piano Quintet in F minor and the Haydn op. 76 no. 4 string quartet (“The Sunrise”).

Tickets at the door are $20. The concert is being held at the Library Community Room at 1115 El Centro St. in South Pasadena. Mask wearing is optional but strongly recommended.

- Advertisement -
The New Hollywood String Quartet had its debut concert in Los Angeles on Jan. 9, 2001 and has been performing to critical acclaim ever since. Inspired by the great Hollywood String Quartet from over half a century ago, the current members of the NHSQ are likewise premiere performers of their generation. Individually, and together as one of the top string quartets in Southern California, they are well known guests at many of the most prestigious concert series in Los Angeles and its environs.
Its members reside in Los Angeles and have recorded hundreds of film scores, are members of the Los Angeles Chamber Orchestra and have decades of chamber music experience between them. Quartet Members are Tereza Stanislav – violin, Rafael Rishik – violin, Robert Brophy – viola and Andrew Shulman – cello.
Dividing her time among chamber, solo, orchestral, and recording projects, Tereza Stanislav has been hailed for her “expressive beauty and wonderful intensity” (Robert Mann) of her playing, her “sure technique and musical intelligence” (Calgary Herald), and “her sweet tone, brilliant phrasing, uncannily pointed rhythm and pure intonation (even at the violin’s highest and lowest extremities)” (Huffington Post).
Rafael Rishik was born in New York City and started the violin at age 4. At age six he was one of the youngest students ever accepted to the Juilliard School of Music.  “Compelling Artistry…” is how the Jerusalem Post described Mr. Rishik’s violin playing. He spent several years performing with the Camerata Pacifica and is a founding member of the New Hollywood String Quartet.
Robert Brophy can be seen and heard playing with the Los Angeles Philharmonic, LA Opera and many West Coast chamber music series. He is featured with Nigel Kennedy in a quartet for Kennedy’s new release Greatest Hits on the EMI label and has performed alongside Martha Argerich, Mischa Maisky, Michel Dalberto and Dmitri Sitkovetsky. Robert has been a member of the New Hollywood String Quartet for the last 6 years.
Andrew Shulman, principal cello with LACO and faculty at USC, was the first British winner of the Piatigorsky Award and was made an Honorary RCM by The Queen Mother. He has performed concertos with the Philharmonia, ASMF, CBSO, BBC Scottish, Utah and Singapore Symphonies, and Los Angeles and Royal Liverpool Philharmonics. As conductor, Andrew has performed in the UK, Europe and Scandinavia.
Bernadene Blaha’s “brilliant command of the piano,” whether featured as recitalist, concerto soloist or chamber musician, has been heralded in performances throughout North America, Europe, Australia, Asia and Mexico. Piano and Keyboard magazine has reviewed her as, “a pianist of integrity, with lovely sonorities and total clarity of line.” Ms. Blaha is a founding member of the piano trio Latitude 41, formed in 2009 with violinist Livia Sohn and cellist Luigi Piovano.
The Restoration Concerts Committee, a committee of the non-profit organization, The Friends of the South Pasadena Public Library, has a goal to bring world-class music at an affordable price to the concertgoers in South Pasadena and surrounding communities. As our name suggests, net proceeds from the concerts provide for restorations, enhancements and other benefits to the South Pasadena Library and Community Room.
Visit Restoration Concerts for more information. 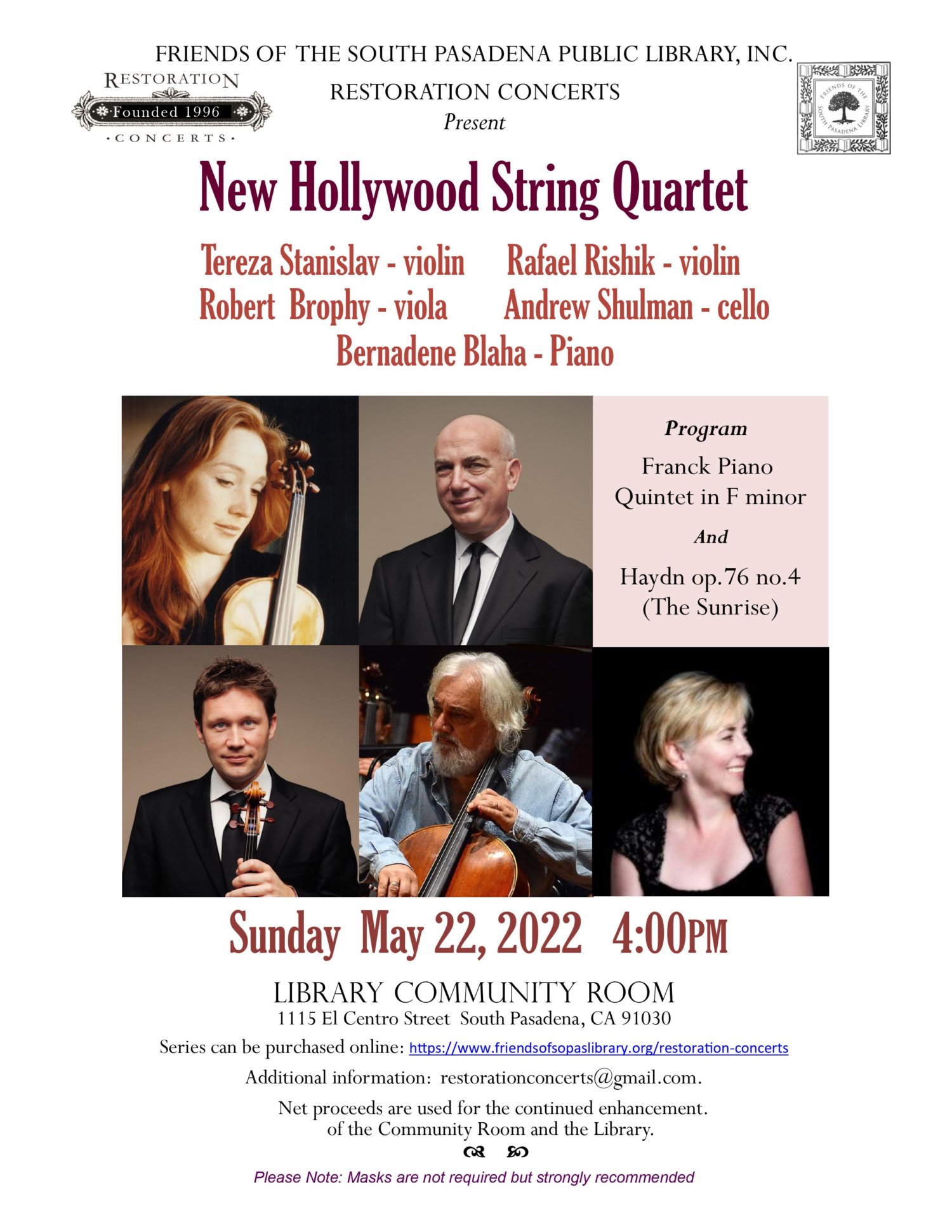