The Restoration Concerts Committee of the Friends of the South Pasadena Public Library will be presenting the next Restoration Concert on Sunday, January 29, 2023, at 4:00 p.m. featuring a cello and piano duo. Cellist Sophie Weber and pianist Ines Irawati will be playing music by Schumann, Shostokovich, Paganini, De Falla and Massenet.

Since this concert was rescheduled from the 2022 season, subscribers should use the ticket that was included in their 2022 subscription concert series. Tickets will also be available at the door for $25. The concert is being held at the historic Library Community Room at 1115 El Centro St. in South Pasadena. Mask wearing is optional but strongly recommended.

Dr. Sophie Webber is an internationally accomplished cello soloist, chamber musician, and educator. Sophie has released two critically acclaimed albums, “Escape: Bach’s Six Suites for Solo Cello” (2018), and, in 2020, “B2C: Bach to Choir”. In 2009, Sophie founded “Fused Muse Ensemble,” a non-profit organization with a mission to increase awareness of social issues through artistic works that integrate music with other media, and amplify those voices too often left unheard.

Known for her expressivity, virtuosity, and versatility, Ines Irawati is in demand both as a solo recitalist and a collaborative pianist. Irawati is currently enjoying a richly varied performance career, excelling in solo performance, chamber music, collaborative piano, and operatic vocal coaching. Her recent engagements include performances for TEDxSan Diego at Copley Symphony Hall, the Art of Élan, Musikamar chamber concerts, concerts in Centro Cultural Tijuana, and performances all over Southern California.

In October 2022, Ines and Sophie released their debut duo album, “Roots: Transcription of Romantic Works for Cello and Piano.” Praised as “a must for every lover of the romantic cello” (Interlude) with the duo’s energy described as “jumping right out from your loudspeakers and leaving traces of happiness in the air” (Classical Candor), the album brings together a collection of favorite romantic works from the Cello and Piano literature which are all transcriptions from another instrumentation.

The Restoration Concerts Committee, a committee of the non-profit organization, The Friends of the South Pasadena Public Library, has a goal to bring world-class music at an affordable price to the concertgoers in South Pasadena and surrounding communities. As the name suggests, net proceeds from the concerts provide for restorations, enhancements and other benefits to the South Pasadena Library and Community Room.

For more information about Restoration Concerts and to see the exciting 2022/2023 season, go to https://www.friendsofsopaslibrary.org/restoration-concerts. 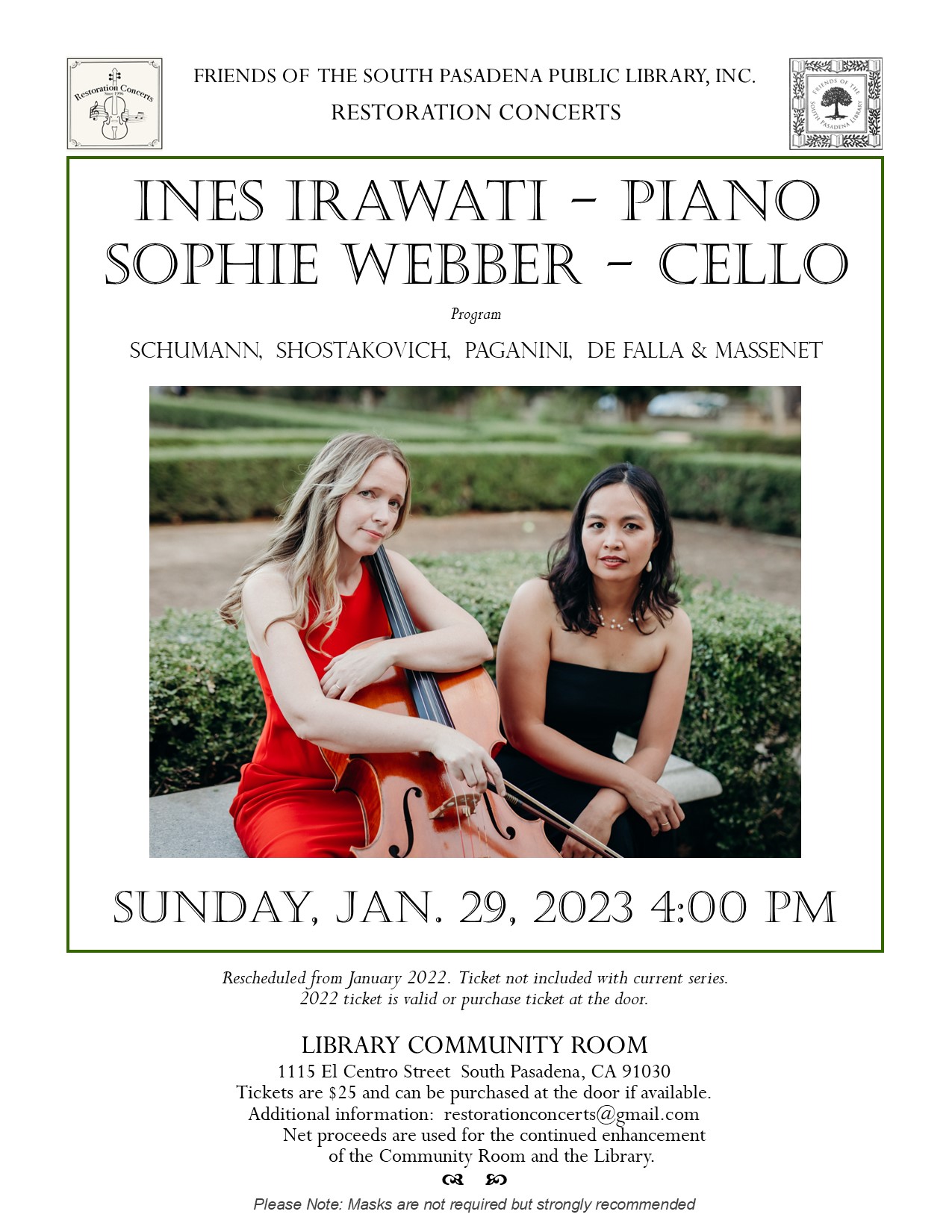