The Restoration Committee of the South Pasadena Friends of the Library is pleased to announce the next Restoration Concert is on Sunday, April 10, 2022 at 4:00 p.m. featuring the Lee Piano Trio with Melinda Lee Masur – piano, Lisa Lee – violin, and Angela Lee – cello. The program will include music by Beethoven, Uljas Pulkkis and Schumann.

Tickets at the door are $20. The concert is being held at the Library Community Room at 1115 El Centro St. in South Pasadena. Proof of Covid vaccination and valid identification must be shown at the door and masks must be worn at all times.

Since its critically acclaimed Wigmore Hall debut in 2002, The Lee Trio’s “gripping immediacy and freshness” and “rich palette of tone colours” [The Strad] continue to move audiences and critics around the globe. In recent seasons, the Trio has given recitals and masterclasses in cities from Shanghai, Hong Kong, Taipei, San Francisco, New York and Toronto to London, Copenhagen, Berlin, Paris and Kiev.

The Lee Trio has performed as soloist with orchestras such as the Shanghai Philharmonic, Kiev Symphony Orchestra and Chorus, Shenzhen Symphony and Macao Youth Symphony. In 2010, the Trio had the distinguished honor to perform for German Chancellor Angela Merkel at the Leo Baeck Institute during her official visit to New York City and in 2014, was invited to perform for former Chancellor Helmut Schmidt to celebrate the 25th anniversary of the peaceful revolution and reunification of Germany.

In addition to giving masterclasses at schools and universities at home and abroad, the Trio regularly performs outreach and concerts in areas where the arts have little or no exposure. In 2011, the Trio took part in a humanitarian trip to teach music and work with underserved youth in Ukraine.

The members of The Lee Trio are graduates of The Curtis Institute, The Juilliard School, Yale and Harvard, the Guildhall School of Music & Drama and the Hochschule für Musik und Theater Hannover. The Trio’s awards include the Recording Prize at the Kuhmo International Chamber Music Competition in Finland, 2nd Prize in the G. Zinetti International Chamber Competition in Italy, and the Gotthard-Schierse-Stiftung grant in Berlin for rising international artists.

The next two Restoration concerts will be held on May 8 with Pianist Robert Thies and May 22 with the New Hollywood String Quartet.

The Restoration Concerts Committee, a committee of the non-profit organization, The Friends of the South Pasadena Public Library, has a goal to bring world-class music at an affordable price to the concertgoers in South Pasadena and surrounding communities. As our name suggests, net proceeds from the concerts provide for restorations, enhancements and other benefits to the South Pasadena Library and Community Room. 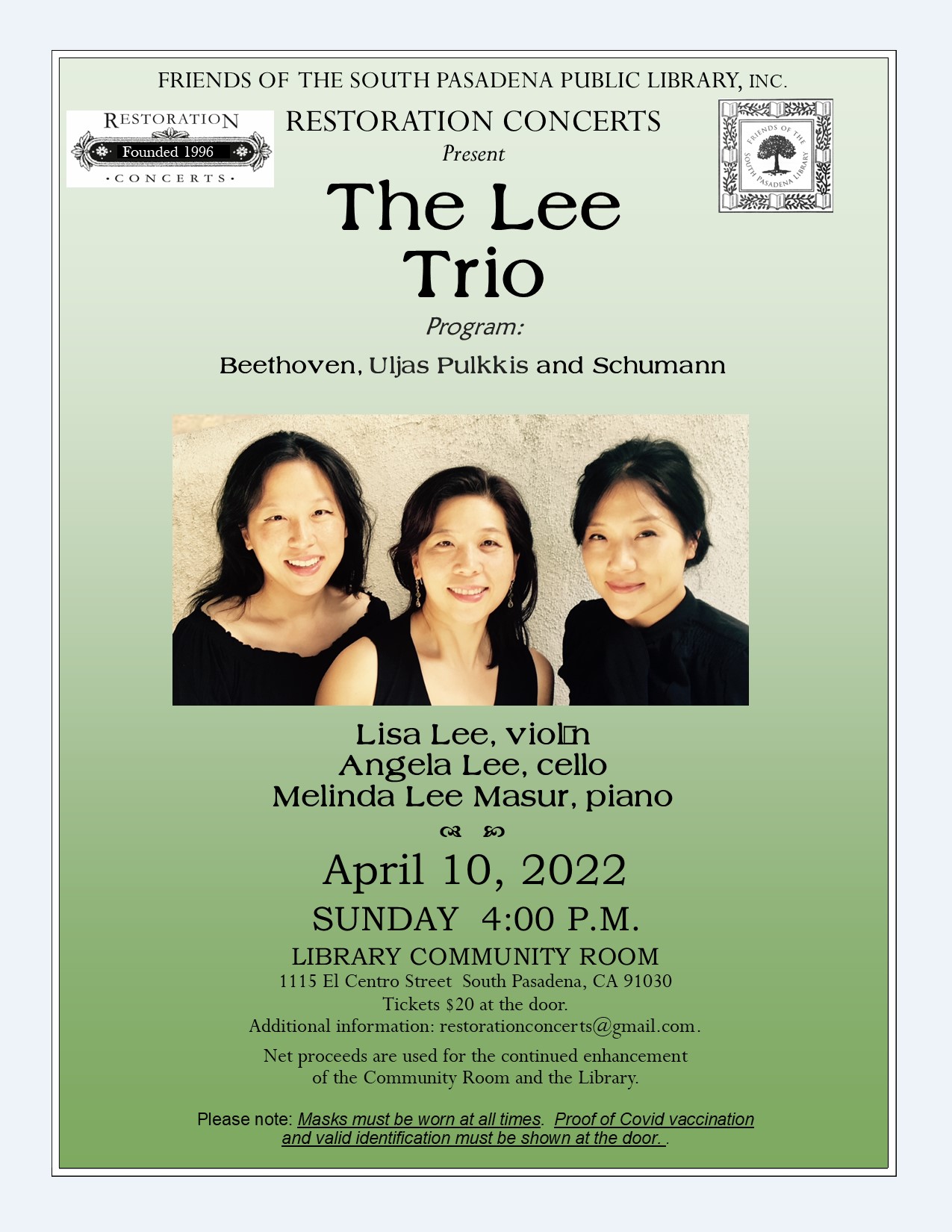