Andy Kimbel, a national touring acoustic folk and blues performer and recording artist launches this series with a goal of providing newly discovered talent an opportunity to perform extended sets alternative to the open mic environment.

In the early 1990s, when the economy turned sour, Kimbel, who was a commercial jet pilot at the time, was placed on a temporary leave. Born and raised in Philadelphia, he graduated from Embry-Riddle Aeronautical University. He had spent more than 1,000 hours teaching others to fly and countless hours working as a commercial pilot, but now he had lots of free time.

“I thought the furlough would only be for a few months,” said Kimbel, so he “grabbed his guitar” and started playing more often. In 1992 his then-girlfriend, Susan, whom he later married, urged Kimbel to get out and play an open mic since he’d been playing music since he was 8 and in the sixth grade, played Rolling Stones-inspired rock ‘n’ roll with The Dimensions, his first band. But that was many years earlier, and now Kimbel just had an acoustic guitar without the amplifiers and drums.

After just one Open Mic, he was noticed and soon sponsored by Sam Adams Brewery. “I didn’t know any songs,” said Kimbel. “I made up the pieces as I went along. I was simply waiting for the airline to call me and return to the flight deck. I had no intentions, it wasn’t even on my radar, to go out and play guitar let alone write songs for my livelihood.”

But Andy’s diverse, Americana, bluesy, fingerpicking songs evoked very positive responses. He soon was recording albums and getting asked to play gigs and media appearances that took him across North America and parts of Europe and included regular appearances on QVC television providing the music for the show “Jammin’ in the Kitchen” seen by an audience of over 500,000 people in prime time.

“Without the initial open mic experience, I’d still be flying airplanes which I guess would not have been all bad either. My roots however are in performing, writing and recording folk and blues music.” Kimbel’s latest recordings “Live in Hawaii” and the later enhanced “Across 3000 Miles”, were recorded and produced by Hawaii Public Radio during a live broadcast concert event in Honolulu.

Prior to leaving the East Coast, Andy was the recipient of two “Best of Philly” awards for his own open mic productions that attracted between 40 and 60 musicians weekly. His Song Splash showcase was created as an extension to provide selected open mic performers an opportunity to play in a more professionally produced show.

Now since residing in South Pasadena, and taking a hiatus from touring due to Covid, Andy has been working with Jeweled Universe store owner Diane March in producing what is becoming one of LA’s most popular open mic’s. every Thursday night form 7:30 to 10 PM. There is no bar, no restaurant, no clanking of dishes and performers do not have to play over loud conversations. The venue provides a real stage, piano and sound system making this one of the most unique and intimate environments in the area for acoustic musicians and piano players of all styles and ages to perform in a supportive environment, regardless of their skill level and previous experience.

Andy will be hosting Song Splash each month and he will also be featured in the series kick off Saturday March 5th at 8:00 PM along with two very talented musicians in their own right, singer songwriters Lauren Hart and Virginia transplant Peter Yu. As seating is limited, it is suggested that you call Jeweled Universe at 818-421-1993 to reserve a seat. A donation of $10 is requested to keep the event going. 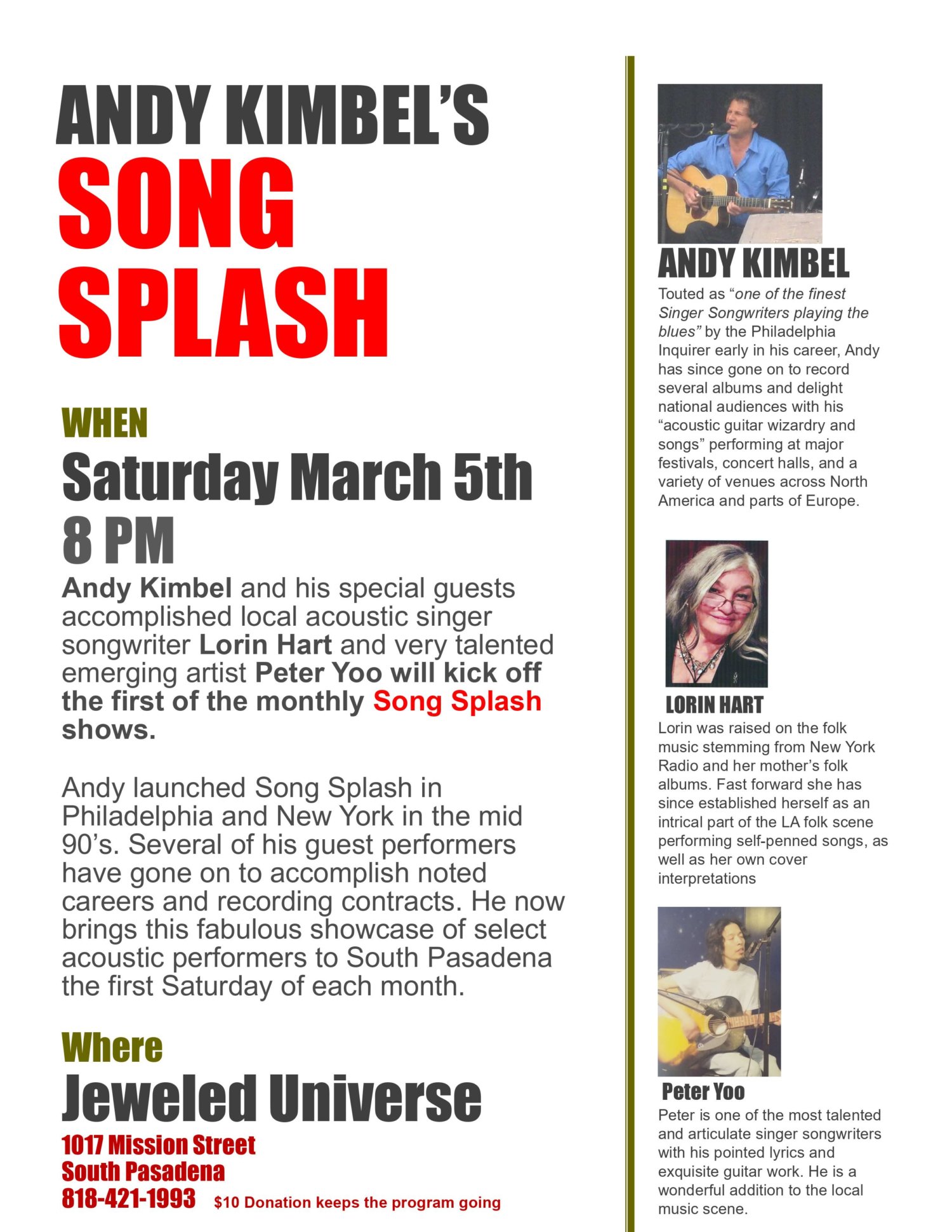