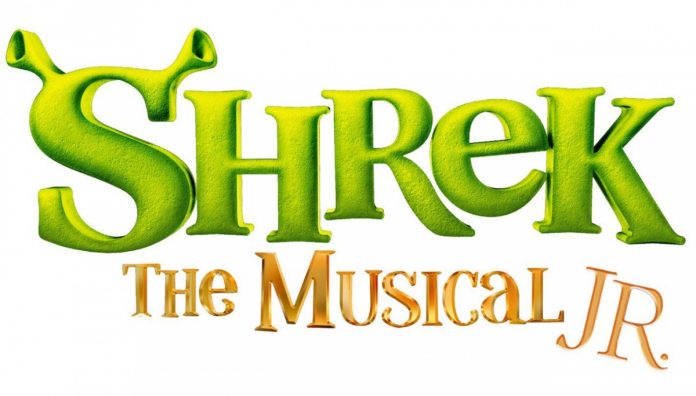 Get ready for some spring greenery, because the Big Green Ogre Shrek will soon be on the YST stage! This is YST’s first time producing this show, and they are loving it!

“The songs are instant favorites”, says Jack J. Bennett, YST director. “I find myself humming them for days after every rehearsal.”

Based on the 2001 DreamWorks film, Shrek finds his swamp invaded by banished fairytale misfits who have been cast off by Lord Farquaad, a tiny terror with big ambitions.

When Shrek sets off with a wisecracking donkey to confront Farquaad, he’s handed a task – if he rescues feisty princess Fiona, his swamp will be righted. Shrek tries to win Fiona’s love and vanquish Lord Farquaad, but a fairytale wouldn’t be complete without a few twists and turns along the way.

If you’re a regular at the Fremont, you may remember some of the returning leads. In “Jack’s Cast”, Jack Wisinski takes on the smelly green role, and in “Levi’s Cast”, SPHS student Levi Srebalus dons the ears. Ava Broneer complements Levi’s Cast as Fiona, and Sophia Marshall-Pelayo in Jack’s Cast. Newcomer to YST Henry McLaughlin takes on the hilarious role of Lord Farquaad in Levi’s and Akirin Au (just seen in “And Then There Were None”) plays the Lord in Jack’s. Plus,there’s plenty of other new faces, familiar faces, fairy tale characters and woodland creatures to round out the show!

Full of laughs, love, and songs you’ll leave the theatre humming for days, Shrek is fun for everyone!

Shrek Jr. opens on March 1st, and runs just four weekends –closing March 24th– for a total of 16 performances. For showtimes and ticketing, as well as more info about YST, you can go to www.YoungStarsTheatre.org