Shakespeare by the Sea (SBTS) is proud to announce the opening of MACBETH, one of Shakespeare’s most dramatic and thrilling plays, during its 20th Anniversary Season this summer. Helmed by Ovation Award-winner, Stephanie A. Coltrin,audiences will be drawn in by this potent political story of a legendary king beginning June 22 in San Pedro.

For 19 years, Shakespeare by the Sea has been delivering professionally-crafted and family friendly productions, presented completely free of admission to Southern California audiences throughout Los Angeles and Orange Counties. MACBETH will be presented in 12 locations, beginning and ending at its own stomping ground at Point Fermin Park in San Pedro. (In repertory with The Taming of the Shrew, SBTS will perform in 24 locations total.) The festival has become a favorite event, entertaining more than 20,000 folks each year who come to enjoy Shakespeare under the summer sky.

“By the pricking of my thumbs, something wicked this way comes.” Seduced by supernatural prophecy, Macbeth and his Lady embark on an ambitious quest to win the Scottish Throne. In the aftermath of their success, we glimpse a world torn apart when a volatile, paranoid tyrant becomes King. Director Coltrin remarks, “MACBETH is a play I have loved since I had a life-changing experience seeing it at age thirteen. I remember not understanding the politics, but understanding the tragedy of the events as they unfolded.” She continues, “Since I began directing Shakespeare, I have been yearning to dive into this play – to explore this world psychologically and politically.”

Since 1998, SBTS has reached over 455,000 youth and their families, seniors and individuals in Southern California with quality arts and educational programs. Funded entirely by donations and grants, Shakespeare by the Sea brings contemporary and classic works to underserved, culturally diverse audiences in order to ignite imagination, promote literacy and encourage artistic expression. This season’s performances are made possible through the support of the LA County Arts Commission, Orange County Community Foundation, LA County 4th District Supervisor Janice Hahn, The Kenneth T. and Eileen L. Norris Foundation, Malaga Bank, and multiple City Tour Sponsors. The San Pedro performances are made possible in part by a grant from the City of Los Angeles, Department of Cultural Affairs. 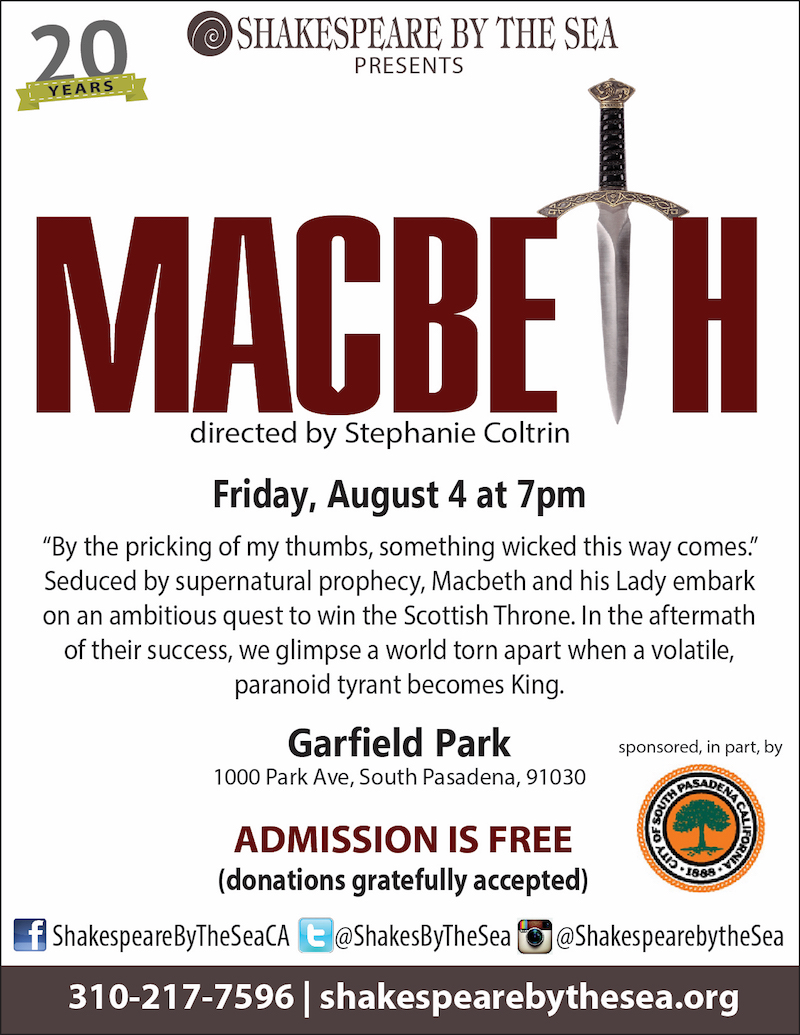