Ask any family in town whose children have gone through our public elementary schools and they will tell you how much art teacher Sarit Swanborn has meant to them. “One of my favorite moments in South Pas was walking into Munch Company and seeing my son’s artworks displayed,” says Arroyo Vista parent Jessie Mobley. “Mrs. Swanborn had the students paint portraits of a dog in a vibrant Andy Warhol/pop-art style. They also made clay statues of that dog, which has now joined the collection of AV art on display in our home.” Her son, Max, echoes her enthusiasm for the art exhibit saying, “she made us feel important by putting up our artwork around South Pas.”

Much to the joy of Mobley, countless South Pas families and all the teachers and selection panel who voted, Swanborn has been selected as South Pasadena Unified School District Teacher of the Year. She was first named teacher of the year at Marengo Elementary this spring which led to her being eligible for SPUSD Teacher of the Year –  to say she is honored is an understatement she tells us.

Teachers of the year are selected by the teachers at each school. “I never thought this honor would come to me because I’m only at each school site for 13 weeks. I’m very invested in each and every student but I’m all in and then I’m gone. That is the plight of the ‘itinerent teacher’. So this is truly a dream to even receive a nomination let alone be named as Teacher of the Year.” In fact, she was named Teacher of the Year at Marengo even though her time spent there was in the Fall. Swanborn reflects, “it was quite an exciting year – we rolled out printmaking for the 4th graders, which we displayed in the front office along with the koi fish of the 5th graders, Paul Cezanne inspired art for first graders – the kids made beautiful art and we really showed the diversity of sophistication from younger grades to upper grades. And I think it made a tangible difference.”

This visual arts program has been in the making for 12 years. It started out as an artists-in-residence program where art instructors were contracted in by way of a partnership between SPACE (South Pasadena Arts Center which is now closed) and SPEF. Our district had lost the funding for a full time art teacher in 2008. There was an opportunity for SPUSD to partner with The Music Center but local artists here in South Pasadena with children in the district said, “we have our talent base right here.” Parents like Victoria Arriola and Hope Perello lobbied in parent forums to have SPACE partner with local educators who are artists to create South Pasadena’s  own artist-in-residence program, which is what ended up happening. So for the next three years instead of not offering any visual arts, they were able to bring back an art curriculum for the students. Swanborn taught 3rd-5th, while Rebecca Tager, Diana Friess, and Sarah Dugan taught Pre-K– 2nd.  It was called AIR (Artists-In-Residence), directed by Arriola and Perello who brought the artists in. They had 90 minutes with each class. It was an 8 week course culminating with a two week project/exhibit.

“What we were trying to do was to bring in sophisticated visual arts curriculum that was engaging, relevant to real world connections, and very robust. We didn’t want to dilute it down. We wanted to bring in contemporary connections and introduce them to different art movements with a bent on a thematic approach.” Swanborn was very involved with creating her curriculum emphasis for 3rd-5th grade during those three years. The first year the theme was visual architecture, the second year was the architecture of self  – looking at proportional relationships of the body – and the third year was the artist within – looking at the power of symbolism. “So they were really substantial and highly engaging and we found the children could rise to that occasion and perform beautifully and their wisdom was coming out. We set the bar high,” she explains.

Based on those three years, when they finally received a budget for a full time art teacher again, Swanborn, already credentialed, was in a ripe position to fill that role. She was hired in 2013 and says, “I was so excited to create more thematic curriculum!” And thus began her tenure as the art teacher for all three elementary campuses with 13 weeks spent at each school. At that point, none of the three schools had a designated art classroom. Instead, until this year, Swanborn had an elaborate “art cart” that she would go from room to room with, packing and unpacking materials for every class.

That first year saw Swanborn create from the ground up, a robust curricular program that would allow all materials needed to be able to fit on that cart. And of course now she was teaching Kindergarten through 5th. “My promise was the legacy of the AIR program meant that the level of sophistication had to remain just as high – and I was so excited to do it – I had become very good at understanding where to put the level.”

Each year has seen an overarching theme, the first of which was “Shelter: From function to fantasy” that saw each grade level looking at a different form of shelter – first graders looked at beehives – connecting to architecture in arid Africa and what shelters resembled a beehive dome. They discovered the work of French artist Louise Bourgeois who was fascinated with the spider sculpture, “Maman”, and looked at textures such as what a spider weaves together as their form of habitat. Each grade looked at a natural habitat and a manmade one. All of the work uses the 4 “C’s” – collaboration, creativity, communication and critical thinking and future years explored themes of the art of myths, magical landscapes, the language of art and the artist within.

As you can tell, Swanborn challenges her students on multiple levels, exploring working artists, architects, and artisans interweaving humanitarian issues, history and current events using multiple mediums from clay sculpture to watercolor, collage, painting and mixed media. I’m really only scratching the surface of all she does, day in and day out, year after year, to educate our students in visual arts and unlock their creativity and curiosity.

What exactly is the criteria for district Teacher of the Year? A panel made up of former district Teachers of the Year look at the winners at each elementary campus as well as the middle and high school. You have to have over 8 years of instruction, speak with passion about your subject, articulate with enthusiasm and they look at the ripple effect of your teaching and how does that integrate into the community. They look for someone that they would put forward to compete for LA County, California and nationally.

Swanborn has influenced untold children in town through her teaching, mentoring and her passion for art. Many of her students have gone on to study art at the high school level and privately and are now in top university art programs. This honor comes at a very special time, as Swanborn, post pandemic, has now moved into designated art rooms – no more art cart! After years of advocating for stand alone art rooms that provide a calm art sanctuary for the students, through Measure SP, we now have gorgeous, state of the art rooms for Swanborn and the students. Marengo’s and Arroyo Vista’s are completed with Monterey Hills about to be opened. Measure S in 2013, and renewed in 2017 secured funding for the teachers themselves including visual and performing arts teachers as well as support staff including aides, librarians, nurses and school psychologist.

Parent Jeany Fong calls Swanborn, “supremely gifted. Week after week, I watched her introduce styles used by the Old Masters of painting, but she always took care to balance information about art concepts with relatable references and instructions. The students quickly absorb Mrs. Swanborn’s enthusiasm and her unwavering belief in their abilities – and the positivity blossoms through into their art pieces.” Fong goes on to say, “her creativity and warmth gives children a much-needed refuge from the demands of academics – a mental reset that is both fun and rewarding.” After more than a year of working with Swanborn, Fong says her son developed an appetite for sketching, a passion he possesses to this day and she credits his sessions with his “tremendously talented instructor.”

5th graders Gianna Mow and Evalyn Baum have been with Swanborn for three and six years respectively, and they both credit her with inspiring their love of art. Says Mow, “she’s so energetic and all the students love her – she makes this art class so much fun! Miss Swanborn is my favorite teacher.” Mow has displayed her work at the Maya Salon in town as well as sold pieces in Lake Arrowhead and says she fully intends to continue pursuing art in middle school and beyond. Echoing her sentiments, Baum says, “I’ve watched Miss Swanborn with all ages of students from kindergarten to 5th grade and she’s just so nice and the art program is really good. My favorite project was the blue dogs in 3rd grade,” referring to those dog portraits, many of which were displayed at Munch Co. during South Pasadena’s Arts Crawl. 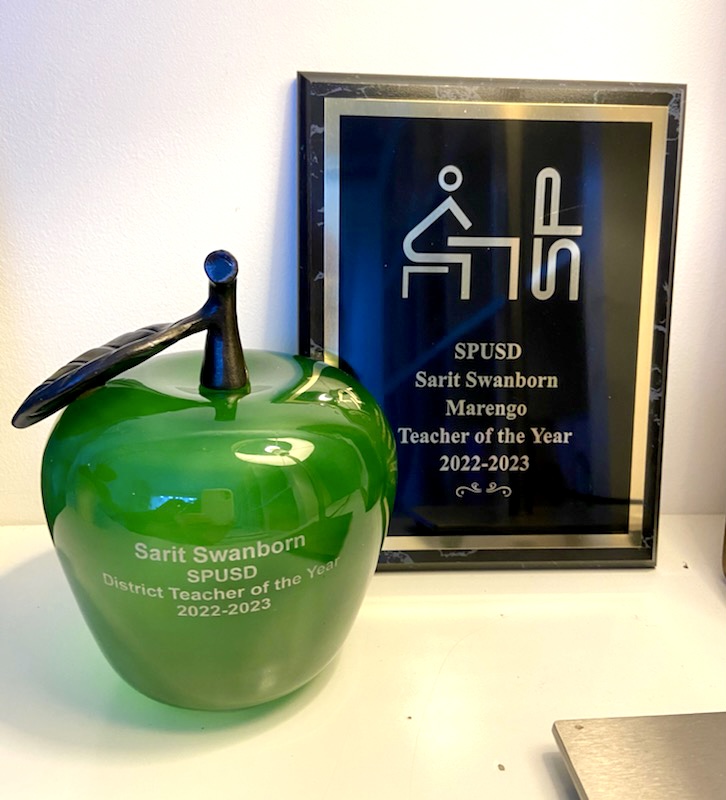 I had the privilege of sitting in on a couple of Swanborn’s classes at Monterey Hills recently where her 2nd graders were thoroughly engaged in working with India Ink, painting over their intricate sketches of flowers in a vase. Swanborn first demonstrates how to work with the ink, giving them techniques and suggestions using the overhead projector in a darkened room. She tells the students that adult artists spend their lives trying to recapture the spontaneity and whimsy that children have naturally. She encourages them to take whatever so called “mistake” or “accident” and make it into something, and to just “let it go! Let it flow!” She repeats to them as they work, “you got this! Let it flow!” Then the  lights come up, the music goes on, and the magic begins.