A smiling Brant Dunlap summed up Thursday’s annual Crunch Time Party, a key fundraiser for South Pasadena’s float in the Rose Parade each year saying, “It was wonderful to see people happy to see people.”

After COVID-19 put the usual big dollar event on hold for a couple of years, Dunlap, the president of the South Pasadena Tournament of Roses (SPTOR) Committee, was pleased by its return.

He said about 140 individuals in and outside the community either purchased individual tickets at $75 apiece or tables of 10 for $700 to be apart of an effort at the War Memorial Building that traditionally raises big bucks for the city’s float, the longest running in the 134 years of the parade and oldest self-builts – constructed entirely by volunteers.

Dinner, a silent and live auction were all part of the evening that focused on supporting a float that will come with a price tag of roughly $110,000, explained Dunlap, after the cost of steel, flowers, wood, a wide range of materials – including natural products – and cost of renting a tent used for its construction in a back parking lot at the War Memorial Building.

While the finals numbers are still being tabulated, Dunlap said more than $10,000 was raised during the live auction portion of the evening.

Other funds for the float’s costs come through a series of fundraisers and contributions made to the organization at SPTOR.org, which the local float president says are still welcome.

Not far from where the party was held, volunteers, wrapped up in sweatshirts, jackets and other warm clothing were outside in the cold working long hours into the night on the city’s float entry.

“It’s coming along, and I’m just so proud of the dedication of those who help put our float in the parade every year,” said Dunlap. “Our volunteers are just incredible.”

Spearheading the Crunch Time Party was Wende Lee, the event chairperson, along with help from Ellen Torres, Therese Molina, Sandy Fielding, Jennie Joe, Sheila Pautsch and others. Sam Hernandez, well known and active in many roles around town, served as the master of ceremonies and auctioneer. Laura Kieffer and Dunlap procured many of items for both silent and live auction.

“We just want to thank all those who helped us with everything we sold,” said Dunlap. “We really couldn’t do it without all the support we receive. It truly is great.”

The major fundraiser has brought in approximately $30,000 – $40,000 in past years and will offset the expensed from the city’s 2023 entry  – “Spark of Imagination” – viewed by millions of television viewers during the January 2 parade and thousands more along the parade route as it takes its 5.5-mile journey down Colorado Blvd.

“It was just great to hold the Crunch Time Party again,” Dunlap, noting that it hasn’t been held since December 2019. “It was just nice to get back to what we’re used to doing, raising money and talking about the future.”

An online auction to support the city’s float will continue until 6 p.m. on January 3, 2023. 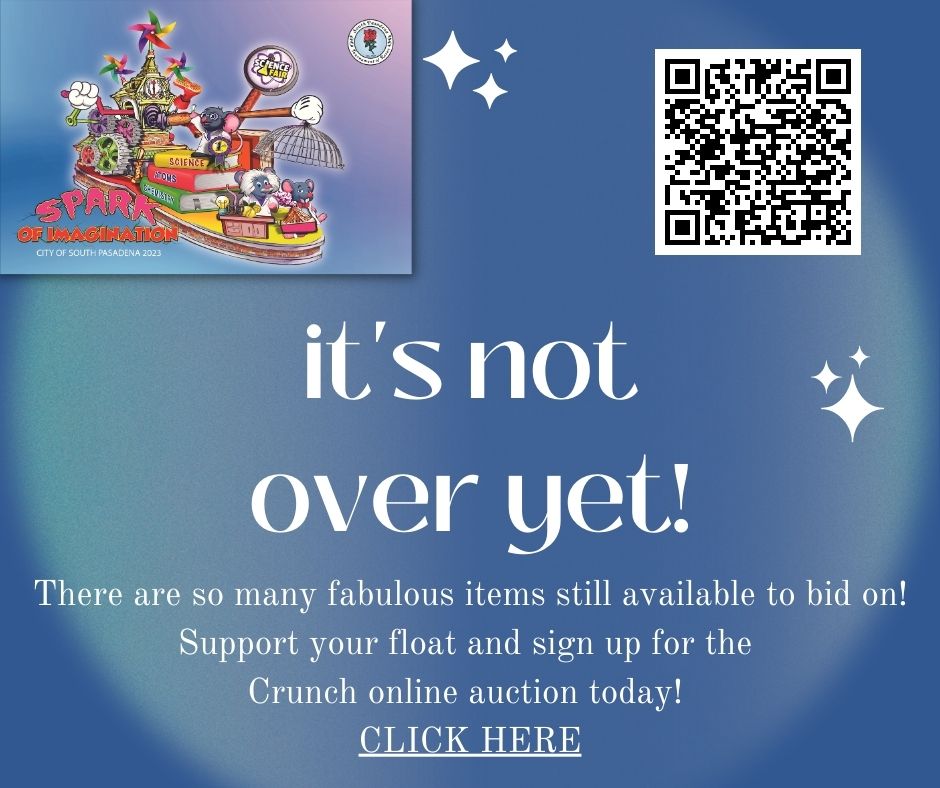