Less than a week after Pasadena’s iconic showcase of flowers was held along famed Colorado Boulevard, plans for next year’s Rose Parade are already in full bloom.

Design idea submissions are being sought for South Pasadena’s float that take part in the floral spectacle on January 1, 2024.

Those with an idea for what the City of South Pasadena’s float will look like are urged to get them in to local float organizers by January 20 of this year.

Or, in other words, very soon. “We need your designs,” stressed Brant Dunlap, president of the South Pasadena Tournament of Roses (SPTOR) Committee. “We have almost finished deconstruction on our 2023 award-winning float. Why the hurry, you ask? We need to get the beast (name of our chassis) ready for your design so we may construct your concept for the 2024 parade.”

While the Tournament of Roses has not officially released the overall theme of the next one, the organization has tossed out a giant hint on what it will be: “World of Music Around Us.”

In a 2024 theme statement, the Tournament of Roses further explained: “The 2024 theme celebrates the role of music in our lives and as part of our collective culture and unique stories.”

Ideas can be a simple sketch or something more elaborate, but they must be received by SPTOR by the due date since working on the float is a year-round project. As outlined in the entry form, design sketches must be black and white, in pen or pencil on paper no larger than 8.5” X 11”.

“Remember, this is the concept stage,” insist float organizers, “so just a simple pencil drawing will do. You may include a description of the drawing and what you are trying to express.”

As noted in the form below, “Design concepts will be judged based on relevance to the parade theme, practicality and popular appeal.”

The local float committee is rejoicing over the fact its 2023 entry for the Rose Parade – “Spark of Imagination” – earned the Bob Hope Humor Award. In 2022, SPTOR garnered the Founder’s Trophy for its “Sky’s the Limit” entry. The 2021 Rose Parade was cancelled due to COVID, but in 2020 the city won the Mayor Award for “Victory at Last.”

For more information about South Pasadena’s float, go to: SPTOR.org

The following is the official hint statement, rules, float design entry and release for the 2024 Rose Parade: 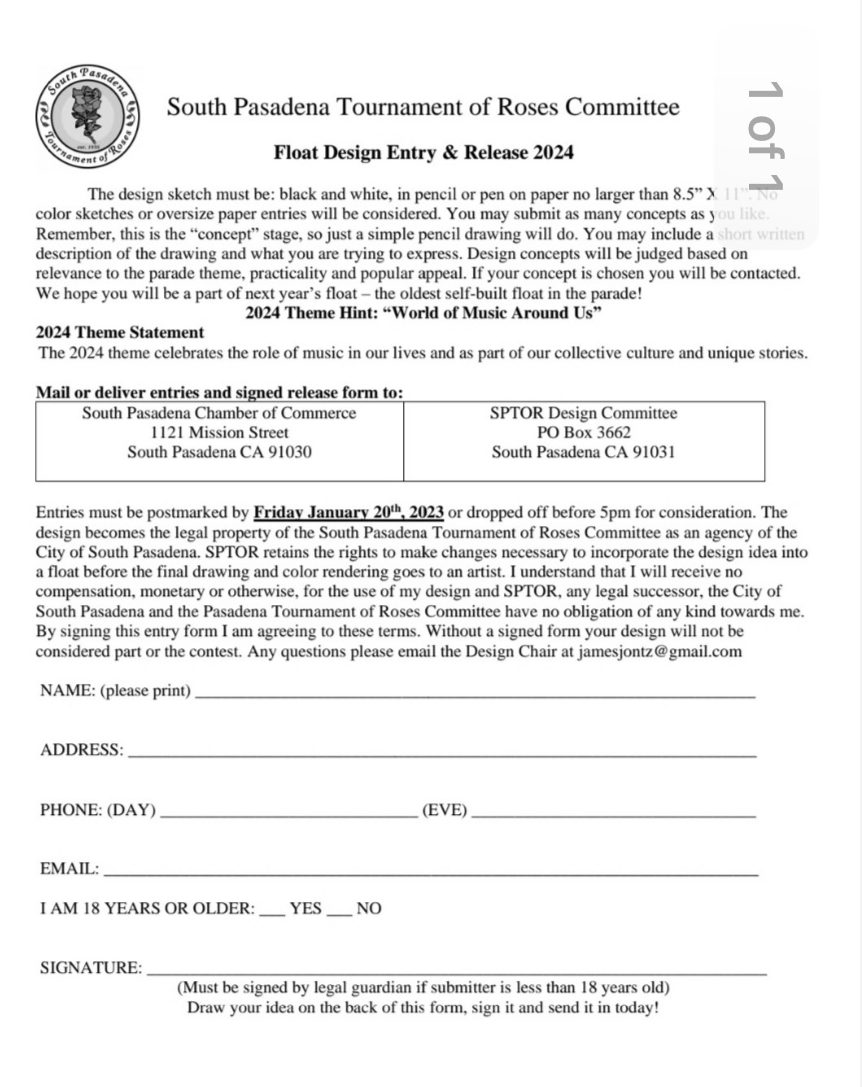