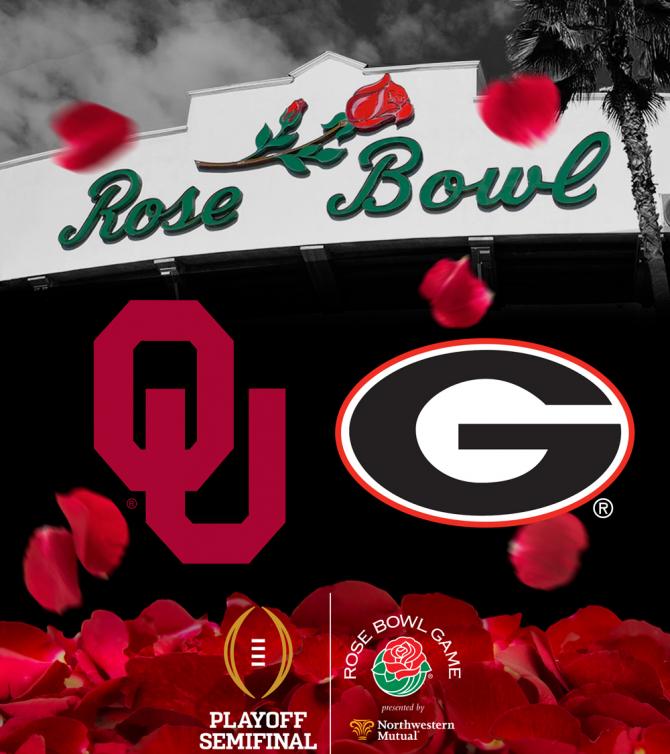 “The Tournament of Roses is excited to host Oklahoma and Georgia at this year’s Playoff Semifinal at the Rose Bowl Game,” said Rose Bowl Management Committee chairperson Scott Jenkins. “The opportunity to host two of the top teams in the country will make for a thrilling game. We are pleased to welcome the teams and the fans from both schools to the Granddaddy of Them All.”

This year’s College Football Playoff at the Rose Bowl Game presented by Northwestern Mutual will be the first-time in history that the Oklahoma Sooners will play the Georgia Bulldogs.

Oklahoma won its third straight and 11th overall Big 12 Championship against TCU Saturday, 41-17, and finished the season 12-1 overall and 8-1 in conference play. The Sooners will make their second appearance in the Granddaddy of Them All. Oklahoma defeated Washington State, 34-14, on January 1, 2003.

Georgia won its 13th SEC Championship against Auburn, 28-7, and finished the season 12-1 overall and 7-1 in conference. The Bulldogs will also make their second appearance in the Rose Bowl Game but the first since 1943. Georgia defeated UCLA, 9-0, in their first appearance, with all nine points scored in the fourth quarter.

Pre-game festivities on January 1, will begin at 1 p.m. The game will be televised nationally on ESPN.