Organizers, supporters, and residents deeply anchored in exasperation over the handling of an altercation during Sunday’s pro-Trump rally have assembled to fervidly rebuke attacks against Black Lives Matter protesters.

The ‘Freedom Rally’ received widespread attention, garnering both positive and negative responses. Though most disputes throughout the day seemed to avoid physical conflict — the occasional verbal spar could be heard amongst the cacophony of zealously expressed slogans and mantras — the demonstration unfortunately ended in another confrontation that left counter protesters once again feeling disregarded as victims.

Two incidents occurred that day. One incident, happening at around 1:00 p.m., involved resident/Assembly District 41 Democratic central committee delegate, Jacinta Lincke, and a 13 year-old girl being coughed at and spat on by “a man wearing a jack o’ lantern t-shirt and purple pants (while) walking a dog” in front of City Hall. This left the younger victim crying and seeking refuge in the Dinosaur Farm, a nearby toy store, according to sources. A second incident occurred at around 6:00 p.m. in which a 16 year-old minor was pulled by her hair, slammed on the ground, and allegedly kicked in the head several times by three Trump supporters — two operating a merchandise stand and one other ambient supporter.

As the Trump Rally brought in close to 350 supporters — most of them supposedly from out of town — so too did it bring opposing representation by way of Biden/Harris and BLM supporters “to say we want this corner back” said London Lang, the original organizer of BLM South Pasadena and a founder of South Pasadena Youth for Police Reform (SPY4R).

When South Pasadena High School senior Jayden Eden heard about the previous day’s transgressions, he immediately phoned Lang to put together a last-minute march in direct response the following day.

After around 150 days of protesting at the same intersection, and what was supposed to be their last day on Saturday, Lang told the South Pasadenan News that when Eden reached out to him he was at first “a little skeptical” while worried about “what’d been happening with (the) Trump people” across Southern California, in reference to similar events being held in places like Beverly Hills, Orange County, and Arcadia. Initially, he said he didn’t know if it was a great idea “But I feel like here in South Pasadena, and especially with what happened (Sunday) night” it would be essential.

While the turnout was small due to same-day promotion, the attendance was secondary to the message; hoping that the spirit of ‘Love Trumps Hate’ will endure no matter what results the elections yield, the largely impassioned group took to the streets marching up and down Fair Oaks, Fremont, and Diamond Ave.

PCC student, Jayden (last name redacted), who has lived here since the 4th grade, says he was motivated to join in both counter protests because he saw “the big ol’ Trump parade running outside my house” and wanted to represent BLM as a South Pasadenan. He said that while he didn’t personally experience as much abusive language as others, he was still accused of being an immigrant several times “but they weren’t hostile about it” noting the irony that “I was born in Glendale (and) raised in LA my entire life. I think the the general vibe (of the rally) was very smarmy. There was kind of a false sense of power, like them saying they’ve won before they’ve even had an argument. When I actually spoke to some people and talk(ed) about policy, as soon I start(ed) to get kind of an upper hand in the argument, they would kind of just leave and go heckle other people.”

First-hand reports and video footage document some of the more radical conspiracy theories and flagrant espousals that were vocalized by some Trump supporters. “Biden eats babies”, “We are not the Nazis, Liberals are the evil ones”, and “Democrats are pedophiles” were some of the more eyebrow-raising soundbites. Lang also said that although it was difficult to make out every word being thrown around, he did hear a fellow counter protester being called a “fat b–h”, while others keep shouting that “masks don’t work”.

A local whistleblower, who wished to remain anonymous, recommended to a reporter on the scene to “keep an eye out for officers giving thumbs up and turning their (patrol car) lights on” throughout the day, which they assessed was a possible example of electioneering. Though some instances of on-duty officers publicly supporting a candidate or political ideology have opened up cases over the matter, the jurisdiction may ultimately fall upon state law and/or individual police department policy. California Elec. Code § 319.5, 18370, could potentially not apply in this case because the rally was not within 100 ft of a polling location. Incidentally, this was the reason the rally was moved from it’s original location at City Hall due to a ballot drop-off box located in front on the sidewalk.

The SPPD Law Enforcement Code of Ethics says “I WILL never act officiously or permit personal feelings, prejudices, animosities or friendships to influence my decisions.” Additionally, under the Hatch Act, it states government employees “May not use official authority or influence for the purpose of interfering with or affecting the results of an election or a nomination for office.”

Correspondingly, resident Jan Marshall condemned the alleged blatant support given to the Trump supporters by the on-duty officers. “(Officers) were driving around, giving hi-5s to the protesters, tooting their horns, flashing their car lights in support of the Trumpers”, Marshall said in a public comment during Wednesday’s City Council meeting. She joins a substantial representation of citizens who are increasingly repudiating SPPD’s actions in the face of political divisiveness. “The overwhelming majority, clearly, were not from our city,” she continued, lamenting that the conclusion to the day “became an ‘us vs. them’ scenario. And who was ‘them’? Our city’s residents; adults and minors. Officers were dismissive, even swearing at parents, it was all so very ugly.”

Eyewitness to Sunday’s altercation, Ixchel Carrizales De Lara, told the South Pasadenan, “When the police got (t)here, they started taking testimonies. We were trying to give our(s) because we had been there for the whole scene. But they weren’t really focusing on us, they weren’t being very helpful. We actually had to demand that they take our testimonies because they were refusing to take them at first.”

De Lara also complained that “officers were being very disrespectful. I thought one of them was winking at me. He was saying ‘go home’ and to ‘be quiet’. Once I said, ‘Are you winking at me?’ I guess that that made him even more upset. He started yelling at me, telling me that I needed to be more polite (and) that I was being immature. I told him he was a professional and that he shouldn’t talk to me that way.”

Another witness, Amy (last name redacted), adds that she went to comfort the previously mentioned 16 year-old girl because she was a classmate of hers. “I was really shocked and really upset that, in the end, the officers didn’t arrest anybody. They just let them go,” she recounts, dismayed. De Lara did add on, however, that they were given a card from a responding officer with a report number.

The police department has been the subject of criticism for several months, as some in the community have accused officers of perpetuating implicit bias, institutional racism, and unprofessional behavior, largely based on what is a perceived pattern of favoring assailants over victims in several high-profile cases, Sunday’s conflicts being no exception and serving as another addition to that list.

The veracity of the rally’s legal status has also come into question by critics. SPPD Sergeant Robert Bartl had previously told the South Pasadenan that no permit was required or issued for the rally. Secondhand reports from some attendees did however avouch that they had properly filed a permit, which according to second-hand reports, expired at 4:00 p.m..

Evidence that such a document exists has yet to be confirmed.

More specifically, whether or not a Trump concessionaire who had set up two booths — and who, coincidentally was one of the 16 year-old victim’s assaulters, and who she, herself claims to have been assaulted by another counter protester — had acquired a permit to sell merchandise, was also in question.

Ava Dunville, another witness to Sunday’s events, wrote to the City, hoping to get some answers, saying “My concern began when I thought back to some of my own fundraisers. I’m involved in several community organizations that raise money for various non-profits. Girl Scouts is required to acquire permits to sell cookies. A club I am part of at South Pasadena High School, TASSEL, would need to obtain permits if we wanted to set up a both on the corner of Mission and Fair Oaks. I am inquiring about the Trump vendors permits. As of now, I am under the impression that they did not have one.”

In an e-mail from Interim City Manager Sean Joyce, responding to Ms.Dunville’s concerns, he said “In fact, the vendor was required to obtain a permit from the city to sell goods in the public right-of-way”. Joyce continues, addressing the officers’ response with, “While we are trying to free police officers to perform their essential duties, we failed to anticipate that a code enforcement officer assigned to that day could have helped in the situation described. Additionally, I will work with management staff to ensure their respective staff have relevant information to help them respond to the type of inquiries you made of them concerning the vendor permit requirement and associated enforcement. I certainly regret that there was an assault involving a teenager.”

SPPD Police Chief Joe Ortiz gave his report on Sunday’s incident, stating that “In complex cases that require additional investigation” they “are usually presented to the district attorney’s office at a later time.” Ortiz noted that the D.A. “may also file additional charges not suggested by the police but still supported by the evidence” and “may again request law enforcement to conduct further follow-up investigation before filing the case. Ultimately, this case will be completed shortly and presented to the district attorney’s office for review and criminal filing considerations.” 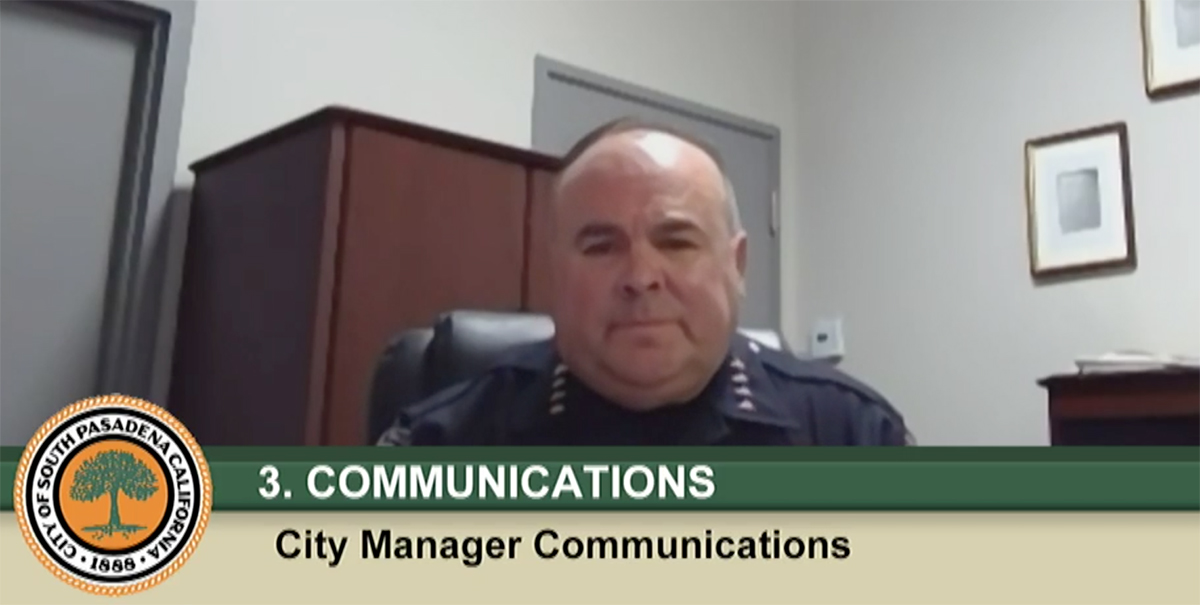 In regards to the disputed Trump merchandise booth, Ortiz said, “At the event, a vendor was selling political campaign memorabilia. It was later determined the vendor did not comply with the correct city ordinance by not having a businesses license and a sidewalk vendor permit.” Whether or not the vendor is facing additional charges for this remains unclear.

Matt Bryant, who was the principal organizer of the Trump rally, says he was unaware of the booth and did not endorse the tent selling any memorabilia. A representative from the Pasadena Republican Club, who says they did not officially help organize the rally but was solicited as a promoter by Bryant, was “astonished” to hear of the physical altercation.

At the tail-end of her public comment on Wednesday, Dunville concluded with an incisive series of questions, asking, “Chief Ortiz, when will you and your department start protecting our community? What warrants an arrest at this point? What are you going to do to fix all that’s happened and turn things around?”

SPPD released an advisory on Wednesday requesting video of the altercation. They ask that if you or somebody you know is in possession of video of the actual altercation, SPPD Detectives would like to obtain it. Please contact the SPPD Detective Bureau at 626-403-7280 or by email at pddetectives@southpasadenaca.gov.