Well, what’s a theatre company to do when one of their stars receives a potentially life changing callback to Julliard School the first weekend of shows? Why call Emmy award winning actress extraordinaire, Jane Kaczmarek of course! In a stroke of theatre magic, local SPHS senior and longtime Theatre 360 student, Anders Keith, has the distinct honor to be replaced by not only a friend, but a renowned actress and Yale graduate. The two are rehearsing with the cast of Peter and the Starcatcher three times weekly for their opening March 9 with Kaczmarek scheduled to perform the 9th & 10th and Keith performing the final four shows March 16-18 at Theatre 360 in Pasadena.

Artistic Director, Devon Yates, went into overdrive looking for Keith’s replacement, knowing he couldn’t pass up the tremendous opportunity, to no avail; current or past students were out of town or unavailable. She then placed the call to longtime Theatre 360 parent and supporter Kaczmarek, who happily and generously agreed. Yates and the entire cast could not be more amazed, grateful and excited.

For her part Kaczmarek says she is having a ball, “honestly, this is incredible and I am honored to work with the cast and Anders Keith. He is the real deal; so talented, such a natural with a great singing voice and he has so much energy on stage! I just think he’s got a terrific career ahead of him as a professional actor. And what’s lovely is that he is so humble.”

The feeling is mutual with Keith adding, “I am so honored to be working with Jane and so grateful to her for doing me this immense favor. She is an absolutely delightful person and performer and I owe her so much.”

Peter and the Starcatcher is the joyous, fantastical journey that is the prequel to the beloved story of Peter Pan; an epic origin story, both hilarious and inspiring. As always with Theatre 360 productions, the show is fun for the whole family and this show has touched hearts of young and old alike, letting their imaginations fly!

If you’ve ever wondered how Peter became Peter Pan, this story takes you on the swashbuckling, mad-cap adventure as the orphan Peter is whisked away on a pirate ship to discover his destiny. This five-time Tony Award-winning show features sixteen actors playing more than 100 unforgettable characters. It is an imaginative prequel that will have you HOOKed the moment you let your imagination take flight.

There are six chances to see this incredible show beginning this Friday with Jane Kaczmarek. Peter and the Starcatcher runs March 9-18 at Theatre 360, located at First Baptist Church 75 N. Marengo Ave. Pasadena, Ca 91101. Tickets are currently on sale through Brown Paper Tickets www.brownpapertickets.com/event/ or through Theatre 360’s website www.theatre360.org.  Ticket price $16.00. For any questions on tickets please call 626-577-5922. 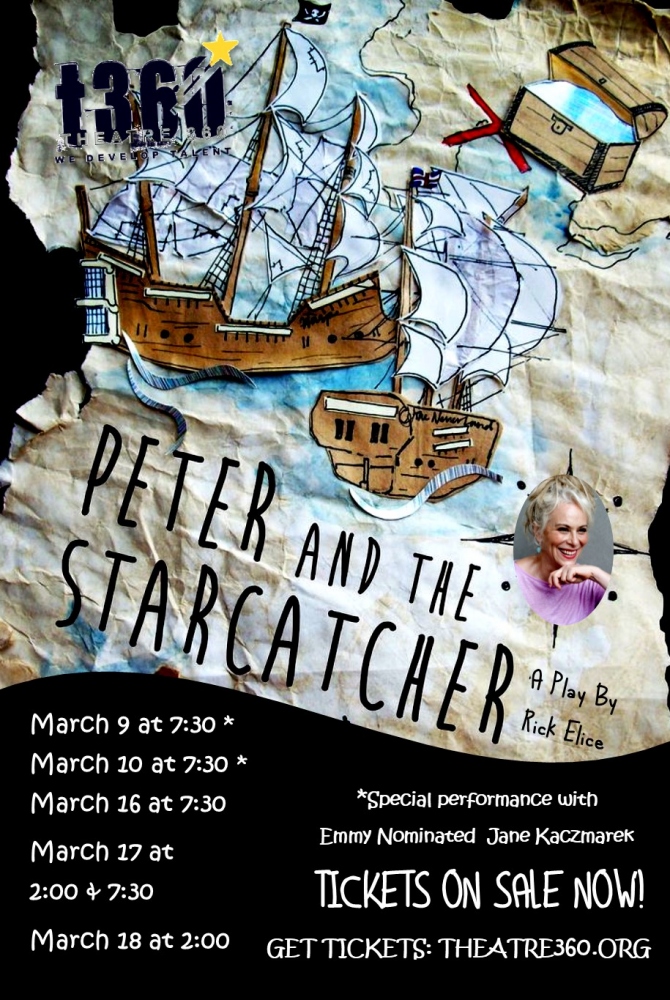