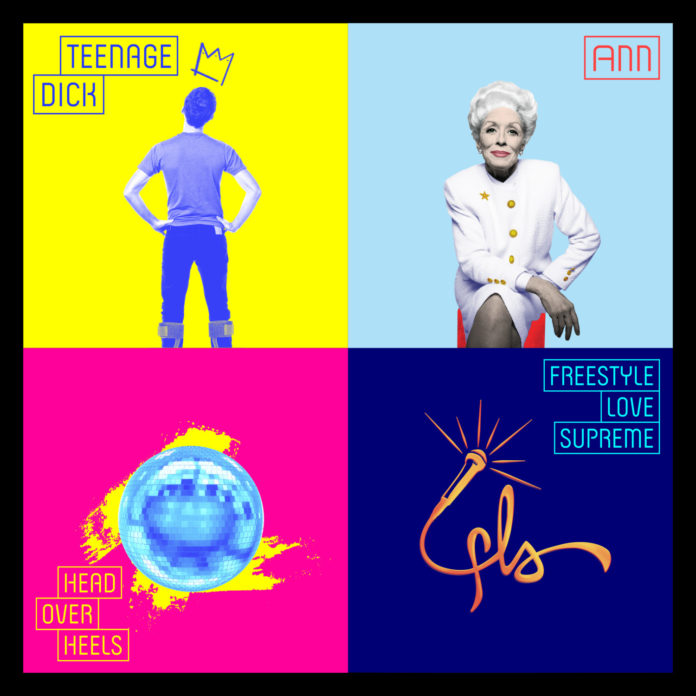 Pasadena Playhouse has announced a season of four Los Angeles Premieres –  an experiential reimagining of the Broadway musical Head Over Heels with songs by The Go-Go’s, directed, choreographed, and conceived by Jenny Koons and Sam Pinkleton (the Tony-nominated choreographer of Natasha, Pierre & the Great Comet of 1812); Mike Lew’s Teenage Dick, a modern take on Shakespeare’s Richard III, directed by Tony Award nominee Moritz von Stuelpnagel; Ann written by and starring Emmy Award winner and Tony Award nominee Holland Taylor and directed by Benjamin Endsley Klein; and direct from Broadway, Special Tony Award recipient freestyle love supreme, conceived by Anthony Veneziale and created by Thomas Kail, Lin-Manuel Miranda, and Anthony Veneziale. A fifth production will be announced at a later date.

“We are reemerging from lockdown and people are excited to move forward. The Playhouse is not just ready to welcome people back, but also to reinvent the way we engage with theater – and with each other. This is more than just our next season – this is our first season of a new world.” – Danny Feldman, Pasadena Playhouse Producing Artistic Director.

The Playhouse will require all patrons to be vaccinated and wear masks while inside the theater. Details on the policy and New Membership options are now available at pasadenaplayhouse.org, or by calling the box office at 626-356-7529.

“We return to the stage with a party for all. There’s been nothing like it in our 100 plus year history. Our historic theater will turn on its head as the audience joins in on the exuberant celebration. A live musical experience created just for this moment, this theater, and this community.” – Danny Feldman, Producing Artistic Director

Originally produced on Broadway in 2018, Head Over Heels has been reimagined for the Playhouse by Jenny Koons and Sam Pinkleton in an all new experiential production. The Playhouse will be transformed to accommodate the new vision for the show, putting the audience in the center of the action. This  musical comedy adaptation of The Arcadia by Sir Philip Sidney is set to the music of the iconic 1980s all-female rock band The Go-Go’s and features the hit songs, We Got the Beat, Our Lips Are Sealed, Vacation, Belinda Carlisle’s Heaven is a Place on Earth and Mad About You.  The audience will join in the journey as a royal family searches to save their kingdom and discovers the joy of each other along the way.

“Shrewd, funny, sexy, and with a glorious beat, Head Over Heels will have you flipping for joy.” – Village Voice

“Mike Lew’s brilliantly hilarious high-school spin on Shakespeare’s classic play Richard lll is at once everything you’d imagine and nothing you’d expect.”

Originally produced at the Public Theater in 2018, Teenage Dick reimagines the most famous disabled character of all time, Richard III, as a modern day, 16-year-old outsider in his junior year of high school.  Bullied because of his cerebral palsy, Richard is determined to have his revenge and make his name by becoming president of the senior class. This innovative, bold play by Mike Lew, directed by Tony Award nominee Moritz von Stuelpnagel, sparks new life into the classic work and reframes the story for today. It continues the Playhouse’s purpose, as the State Theater of California, of using our historic stage to bring stories as diverse as our state. A co-production with Woolly Mammoth Theatre Company and Huntington Theatre Company.

“I found the play exhilarating. It suggests how much richer the theater will be when it is truly open to artists of all kinds. Not just because those artists deserve employment but also because the canon of classics deserves reimagining to match our world.” – Jesse Green, The New York Times

“Not even a pandemic can stop Holland Taylor from bringing her iconic performance of Texas Governor Ann Richards, one of the most important women in American politics, to audiences in Los Angeles! We’re thrilled to bring our postponed production of Ann to the stage this spring.”

Written and performed by Emmy Award winner Holland Taylor, Ann is pure entertainment — an uplifting tribute to this courageous leader, dedicated mother, loving grandmother, and legendary personality. Texas Governor Ann Richards had a heart as big as the state from which she hailed, a wit to rival the greats, and an enduring passion for fair play. Neither partisan nor political, this richly imagined play reveals a complex, colorful, and captivating character whose capacity to inspire us all burns even brighter today. After successful runs on Broadway and across Texas, Washington D.C., and many cities across the country, Taylor finally brings this critically acclaimed, Tony-nominated performance to Los Angeles.

“Mama! Holland Taylor captures the governor’s sly humor, talent for intimacy, and knack for getting her way.” – Nancy Haas, Newsweek

“Joyful, wildly entertaining, and created from scratch each night with the help of the audience. As the Playhouse continues to explore the theatrical medium,  freestyle love supreme redefines what theater can be and its upbeat, free-wheeling nature makes it the ultimate show for this moment in time.”   – Danny Feldman, Producing Artistic Director

From the creators of Hamilton and In the Heights, and direct from Broadway comes a show unlike anything else that has been on our stage before, freestyle love supreme. This Special Tony Award recipient defies definition as the audience joins in the creative process for each performance. Audiences are led by a troupe of the best freestyle rappers in the business and backed by an onstage band. Thomas Kail, Lin-Manuel Miranda, and Anthony Veneziale have created a show that comes to life each night in new ways as the audience suggests ideas that are turned into rhythm and rhyme, right before their eyes. freestyle love supreme redefines “live theater” and explores the boundaries of what theater can be now, and into the future.

“And just as you were thinking that life has no rhyme nor reason these days, along comes freestyle love supreme to pump you full of hope.” –  The New York Times

Members receive advanced access to tickets at significant discounts. This year, in addition to the existing Dynamic Membership, the newly revamped Pasadena Playhouse Membership Program also offers increased flexibility and more options, including the return of a traditional subscription with the Classic Membership, and a brand new $100 PlayhousePass Membership, providing greater value to patrons while fitting into their busy lives. More information can be found at pasadenaplayhouse.org/membership.

Pasadena Playhouse will follow all safety protocols put forth by Los Angeles County and the City of Pasadena. At this time, the following safety plan will be in place upon their return to stage:

The most up-to-date requirements can be found at pasadenaplayhouse.org/covid-19/.