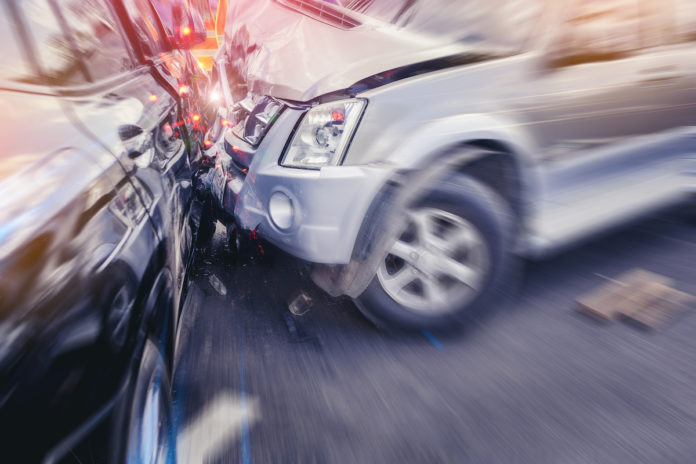 Saturday night, July 25th, illustrated yet again an extremely dangerous traffic situation in South Pasadena. At 1 am, a car came barreling off of Huntington and entered Pine St. However, on this particular Saturday, the car was going so fast that they were unable to brake at the first cross-street stop sign that comes up very quickly (or simply ignored it which is very common), and did not slow down at all as the car hurtled down our residential street, traveling 60 feet and slamming into the side of a parked car on the opposite side of the street.

The impact was so forceful, the hit car shattered the sidewalk it was parked next to. The speeding car was not slowed by this initial impact, but went on to destroy a second car, hitting it so hard the front wheel entered the engine. The car still had enough speed and momentum to hit a third parked car, turning the third parked car a full 180 degrees, shattering its entire front, scattering thousands of pieces of plastic and glass for two blocks down the street in people’s lawns, driveways, walkways and sidewalks, and finally bringing that third parked car to rest on the front lawn of the house adjacent to the car. The speeding car finally ended its journey coincidentally at a house that had already lost three cars in the past to reckless or drunk drivers.

As you can imagine, the impacts were so loud that neighbors heard for miles around. People rushed out their doors into the night to see the driver struggling for life amidst the carnage he had created. We stood on the street in shock, looking at our street where we raise our children, walk our dogs and build our lives. Neighbors, struggling to make sense of what they were seeing, began to tell stories of all the other incidents on Pine St. Multiple people told of losing more than one vehicle, significant property damage, and finally, a tragic story of someone else losing their life.

The next day felt like a wake, neighbors awakened in the night came to see the damage caused, they checked in with each other, asked what they could do, and eventually left defeated, because South Pasadena has chosen not to do anything material to keep its residents safe. They previously completed a study, which told them that the opportunity for speeding traffic was more important than the lives and property of the residents in our neighborhood and they simply installed a stop sign, which comes up too close to Huntington to be effective and which generally is taken more as a suggestion than law.

We need more than a fairly useless stop sign to keep our children safe. We need more than a radar speed sign to allow our elderly residents to cross the street safely. We need our city to value our lives more than the speed of traffic. We are looking to our city council members to take action and create a solution so we do not have to live in fear of the next fatality. There are alternatives which will significantly reduce the risk this intersection causes. It’s only a matter of time before another life will be lost, and at that time, will the city council be able to say that they did all they could to prevent this unnecessary loss?