It was known as the “Golden Age of Lighting the L.A. Sky,” as neon came into vogue locally from 1925 to 1965, as described in Tom Zimmerman’s latest book, “Spectacular Illumination.” 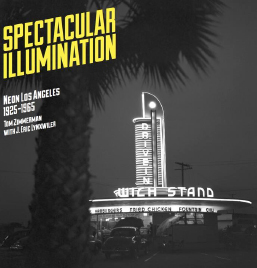 a special guest on Monday at the monthly Oneonta Club meeting, held in Gray Hall at Oneonta Congregational Church in South Pasadena, and talked about the history of neon and its impact on Los Angeles.

“It’s so bright, shiny and pretty,” said an enthusiastic Zimmerman, when asked what has made neon so popular over the years. “They’re re-doing neon signs all over Los Angeles. But they cost tens of thousands of dollars to repair. They aren’t cheap. A lot of people go to their local electrician to get them fixed.”

That doesn’t work, he insisted. “You have to go to a neon specialist,” stressed Zimmerman, noting there are only a handful of them around, but the best place to start to find one is at the Museum of Neon Art in Glendale.

His message to a large gathering in attendance at Monday’s event was to, “Love that neon,” he said. “Protect it and don’t let it get torn down.”

Zimmerman, 68, explained that neon signs first appeared in Paris, San Francisco and New York before arriving in Los Angeles. “Supposedly, there were big traffic jams when they first appeared because people were so excited,” he explained.

“Spectacular Illumination” was recently honored with the best Art, Architecture and Photography award from the Southern California Independent Booksellers Association.

The book is available on Amazon and at bookstores, “if you can find one,” quipped the author.

Monday’s event also featured the music of King Courtney and the Dukes, known for lighting up karaoke stages in and around Los Angeles County with their eclectic style of music.