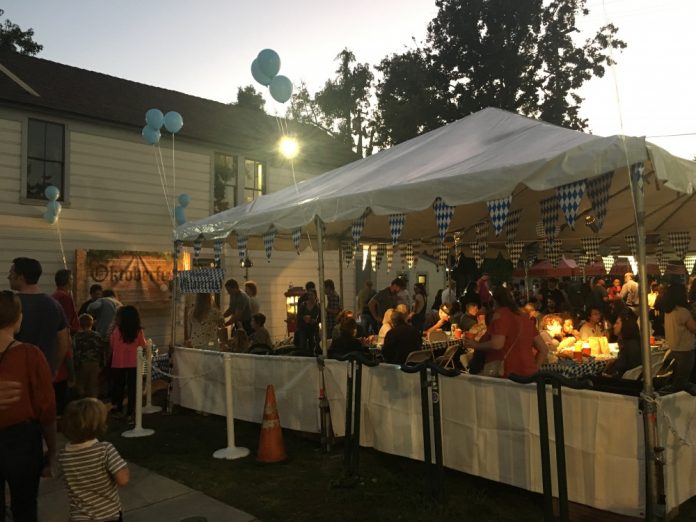 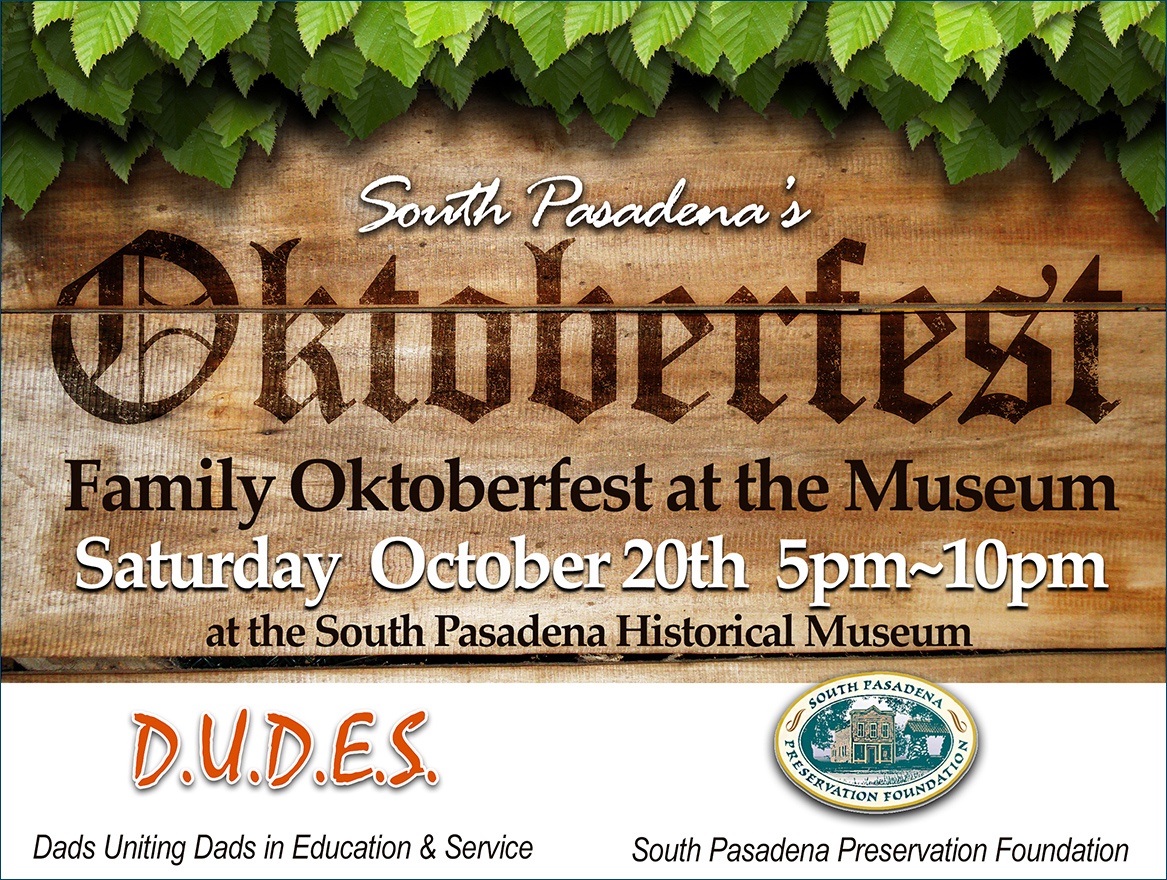 It’s billed as “big fun for a good cause,” as organizers are gearing up for Saturday’s Oktoberfest in South Pasadena.

The second annual event will coincide with the city’s Fall Arts Crawl, a “Neighborhood Night-on-the-Town” from 5 to 10 p.m. when artists and local businesses team up to celebrate the season in a family-friendly setting. The Arts Crawl offers gallery exhibitions, art activities, live music, open houses, food, drink specials, and sales. It is sponsored by the Chamber of Commerce and produced by The South Pasadena Arts Council (SPARC) while the Oktoberfest, now in its second year, is organized by the South Pasadena Preservation Foundation (SPPF) and Dads Uniting Dads in Education & Service – or better known as the D.U.D.E.S.

SPPF President Steven Lawrence stressed that the Oktoberfest at the South Pasadena Historical Museum (AKA: Ironworks Museum) is designed for the whole family, noting arts and crafts tables will be set out for kids to take part in a variety of activities.

“This is a huge event for people of all ages,” said Lawrence, adding that more than 500 people were in attendance at last year’s first go-around.

He expects the number to climb higher on Saturday when beer, wine, soft drinks, sausages, pretzels and kids treats will be in abundance.

“We’re expecting from 600 to 700 people throughout the course of the five-hour event,” said Lawrence. 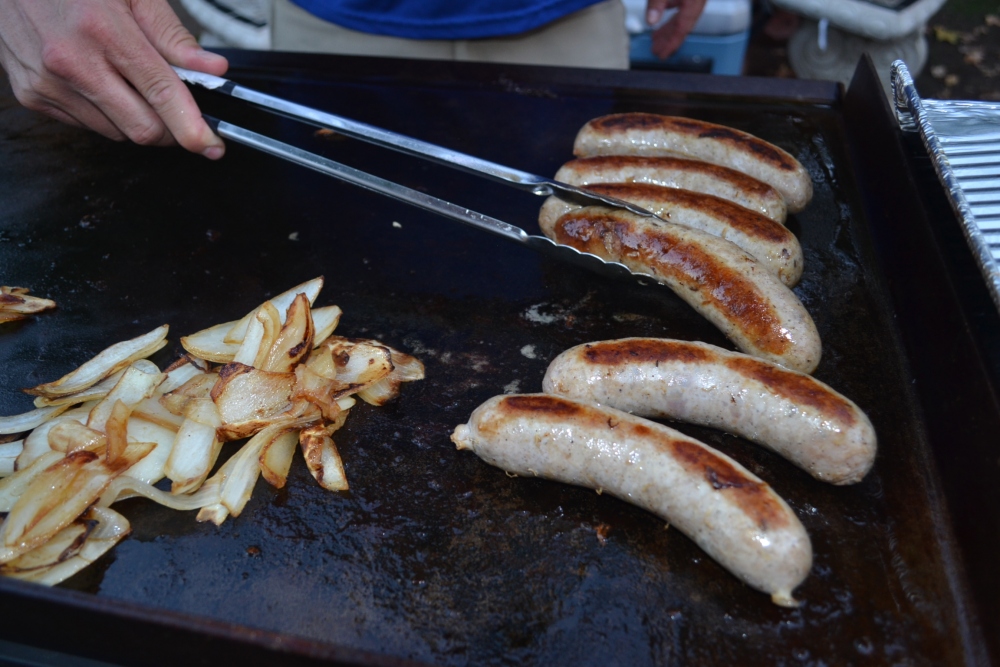 As a result of it being a fundraiser, advance donations of $20, which buys a person 12-concessions tickets, are sold online (www.SPpreservation.org). On the day of the event, the cost is $20 for 10-tickets and can be purchased at the museum.

A beer at the Oktoberfest goes for roughly $8, which is 4-tickets according to Lawrence., adding that a meal for kids, consisting of a hot dog, chips and drink, will be 2 to 4 tickets. “The prices are very reasonable,” he stressed. “The idea is to create an event that is very affordable where the entire family can come out and have a lot of fun.” 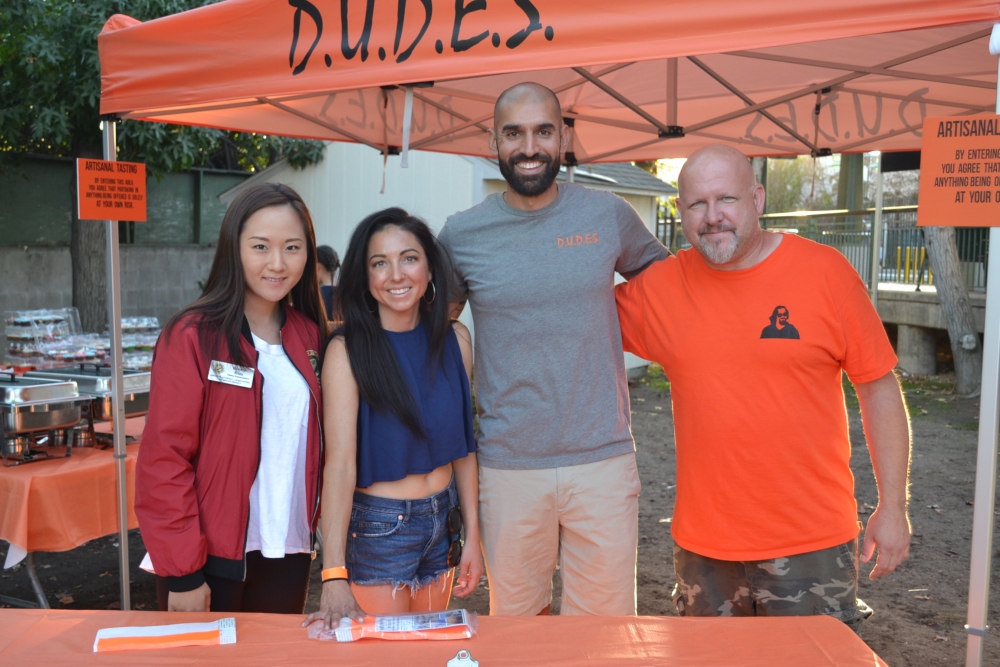 Proceeds from the fundraiser will be split evenly between the South Pasadena Preservation Foundation and the D.U.D.E.S. The SPPF provides the venue, or the historical museum, handles all the administration and logistics. The D.U.D.E.S. provide all the food, beverage and live music, and many of the volunteers.

SPPF donations will be utilized to operate and make upgraded exhibits at the museum, along with advocacy efforts in the community. The D.U.D.E.S. will raise funds for the South Pasadena Unified School District PTA. Lawrence says he hopes the two organizations will divide somewhere between $8,000 to $12,000.

“It’s just going to be fun from start to finish and we encourage residents and friends of the city to come support the South Pasadena Preservation Foundation and the D.U.D.E.S.,” said Lawrence. “The Arts Crawl is great and we felt like the Oktoberfest would lend to it. We hope people will start the Arts Crawl by stopping here or wind up with us at the end. It’ll be a chance to see friends, family, the pillars of the community, right along with those who are relatively new or just moving into town. The event is really for everyone.”  Grab a beer, a brat, and, as Lawrence pointed out, “don’t miss out. It’s going to be a great time.”

The South Pasadena Museum can be found near the corner of Mission Street and Meridian Avenue at the Metro Gold Line Station.

Tickets for $20 are now online at www.SPpreservation.org.