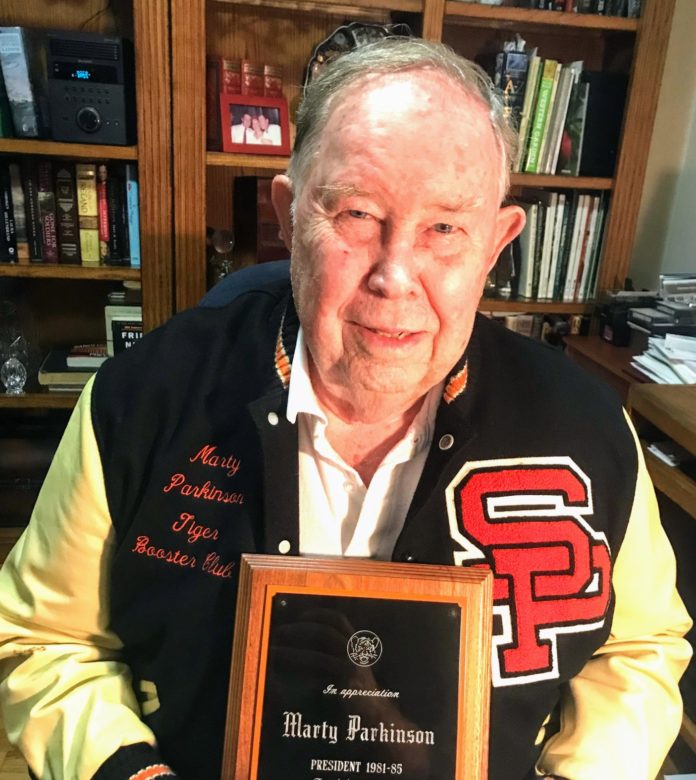 With family, friends and admirers gathered, a final tribute was paid to longtime resident and community activist, Martin Parkinson Jr. He passed away last month at the age of 90.

Born in June 1932, he was the youngest of five children. He played halfback and linebacker in football at De La Salle High School in Illinois and continued playing football for the Army in Germany.

After returning from service, he graduated college from Marquette University in Wisconsin and accepted a Civil Engineering position at Los Angeles County Flood Control in 1959. He married Carlita Quiroz in 1961 and they had four children – Michael, Charlie, Carrie, and Chris. The family moved to South Pasadena in 1969.

Marty was devoted to his children – coaching many different sports including baseball and softball as well as encouraging them all in their other interests. His oldest son, Mike, set running records at SPHS and UCLA and is the current cross country coach at SPHS.

He started both the All City Track Meet and the Tiger Run, was instrumental in bringing Tiger Bingo to the community, and expanded the SPHS Booster Club from football to all sports. Marty left a legacy of involvement at the high school and was one who did not care for the limelight and let others get the recognition.

In 1977, his baseball coaching career culminated in winning a Senior League baseball championship with Gus’s BBQ. He retired in 1994 and travelled throughout Europe with Carla. In the last 5 years, he stayed close to home enjoying time with family, reading on the back patio, and barbequing for his wife of 61 years.

Martin will always be remembered for his tireless support of high school sports and his numerous contributions to the community.