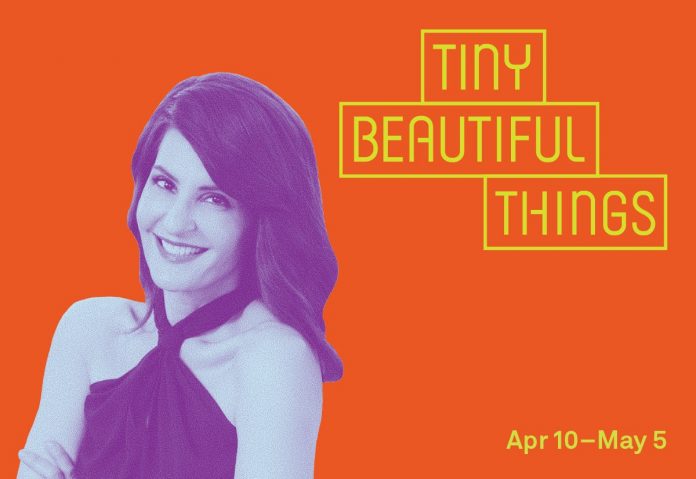 Pasadena Playhouse, the State Theater of California, is pleased to announce that casting is complete for The Public Theater production of Tiny Beautiful Things starring Academy Award-nominated writer and actress Nia Vardalos, who will reprise the role of Sugar for the Playhouse production. Vardalos originated the role of Sugar at The Public Theater under the direction of Thomas Kail. She also created the stage adaptation of Tiny Beautiful Things based on the New York Times Bestseller of the same name by Cheryl Strayed.  The project was conceived by Vardalos in conjunction with Thomas Kail and Marshall Hayman.

The New York Times named Tiny Beautiful Things a Critics’ Pick, stating Vardalos’s performance was “luminous,” and that “Tiny Beautiful Things turns out to be about the endangered art of listening to — and really hearing and responding to — other people … it works beautifully as a sustained theatrical exercise in empathy… a deeply reciprocal relationship between a show and its audience.” Time Out New York said it is “Incredibly moving,” and New York magazine described it as, “Tiny moments when the world surprises us with care.”

Vardalos’s stage credits include Jenny in Company directed by Gary Griffin (Theater 20) and she is an alumna of The Second City in Chicago and Toronto. Her film writing/acting credits include My Big Fat Greek Wedding and its sequel (Academy Award and Golden Globe Award nominations, Independent Spirit and People’s Choice Awards), Connie and Carla and I Hate Valentine’s Day. Her film and television acting credits include My Life in Ruins; For a Good Time, Call…; Graves; and Jane the Virgin. Ms. Vardalos’s memoir Instant Mom is a New York Times Bestseller, and all proceeds are donated to adoption groups.

Sherri Eden Barber will restage the Playhouse production based on the original direction by Kail, who directed both of Lin Manuel Miranda’s Broadway shows – In the Heights and Hamilton, for which he won the Tony Award for Direction (2016). Performances run from Wednesday, April 10 to Sunday, May 5; the press opening is Sunday, April 14 at 5:00pm.

Tiny Beautiful Things is about Sugar, an anonymous online advice columnist to whom thousands of people have turned for words of wisdom, honesty and hope. At first unsure of herself, Sugar finds a way to weave her own life experiences together with the deep yearning and real problems of her readers, creating a beloved column about the monstrous beauty, endless dark and glimmering light at the heart of being human.

The stage version of Tiny Beautiful Things comes to life as a richly funny, uniquely uplifting and moving play.  It is about reaching when you’re stuck, healing when you’re broken and finding the courage to take on the questions, which have no answers

Author Cheryl Strayed also wrote Wild: From Lost to Found on the Pacific Crest Trail, that was the first selection of Oprah’s Book Club 2.0; and was adapted to film starring Reese Witherspoon, Laura Dern, and Thomas Sadoski, star of the Pasadena Playhouse production of Belleville.

Tickets can be purchased online at PasadenaPlayhouse.org, by phone at 626-356-7529, and in person at the Pasadena Playhouse Box Office, 39 South El Molino Avenue, Pasadena, CA 91101.