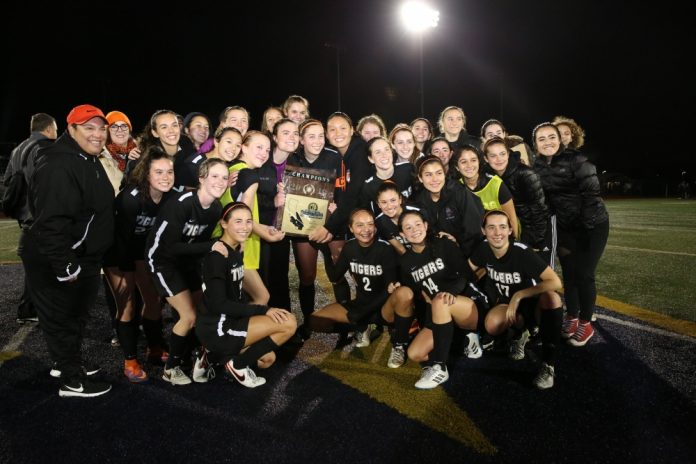 Holding back tears, Tory Lathrop told the group of young, talented soccer players she couldn’t be more proud of what they achieved, reminding them that they were not only the champions of the Rio Hondo League, but now on top of the world as the best team in CIF-Southern Section Division 5 girls’ soccer competition.

Yet, cautioned the South Pasadena High coach, there’s more work to be done.

“We’ve got one thing left to do,” Lathrop said, urging her team to accept an even bigger challenge than winning CIF. “Who wants to go to state with me?”

Joined in a tight circle around their coach, Tiger players yelled “whew, yeah” when hearing the cry from Lathrop regarding one more task at hand. It’s a huge accomplishment to win a CIF title, but there is still a bigger goal ahead now that South Pasadena got past Westminster 1-0 Friday night in the finals, playing a brand of soccer that is nothing short of mind-blowing.

If you’re a South Pasadena opponent, it’s easy to ask, “Just how do we score on this team?”

In five postseason games, including Friday’s CIF finale, only Beaumont has put the ball in the Tigers’ net. What kind of team has 20 shutout victories on the season and gives up only six goals in 26 games? The kind that proudly wears the Tigers’ orange and black, that’s who.

In her childhood, Lathrop remembers the words from a youth coach, Bob Mendoza, who often told her, “Offense wins games, defense wins championships.”

Lathrop has never forgotten those words and is passing along the message to her players, who apparently are all pretty good listeners. They know how to stop teams in their tracks. South Pasadena High’s defensive specialists Jade Myer, Alyssa Bonk, Emma Barrera, and Riley Segal earned high praise from their coach after locking down the Westminster offense, paying close attention to the Lions’ two key offensive threats – Kelly Almazan and Vanessa Campos – who were held in check most of the night.

Lathrop’s defensive front was nearly impenetrable as the Lions discovered first-hand, trying to get the ball past a pair of standout goalies in the Tigers’ Noemi Howland and Sophie Reynolds, who came up with some big saves in the contest.

Now all the Tigers want is to keep this train rollin’ in hopes of adding more hardware to their trophy case.   “It feels amazing, to work all year for this,” said Lathrop, who was presented the CIF championship plaque after the match, standing alongside her team and South Pasadena High Principal Janet Anderson. “This is the culmination of all their hard work – the hours of practice, all those reps in the gym, lifting weights and running sprints.”

Twenty-two minutes into the game, sophomore Corey Segal booted in the only goal of the night past Westminster goalie Zaydee Solis and it held up for the rest of the match. “I’m glad we scored as early as we did,” said the Tigers’ coach, noting that Segal was open at the top of the box when she deftly kicked it in from about 15 yards out. “We caught their goalie out of position and Corey did her job. She has such composure on the ball. I’m glad she had a chance to put that one away.”

Credit Westminster, “they did not give up,” insisted Lathrop. “That was a team that wanted to be here. I wouldn’t be surprised to see them again next year in the postseason.”

The Lions finished the season with an impressive 21-4-3 record while the Tigers look to improve on their 20-3-3 mark when the state playoffs begin. “These girls here are the real deal,” said Lathrop, pointing to her team.

They’re now off to bring home a state crown, believing they can do it under a second-year coach who looked deeply into the eyes of those 26 players in the circle following the win over Westminster, telling them, “Congratulations, I could not be more proud of this group.”

On Sunday, the Tigers are expected to find out who their first round opponent is for the state title.

Friday night’s game was played at Warren High School in Downey, a neutral site for both teams, and tensions were high on both sides, many questioning the calls from officials, especially in the heat of the battle. If the tension of trying to win a CIF title wasn’t enough, both teams were faced with fighting off the elements of a steady downpour throughout much of the match. It finally stopped with about eight minutes left in the contest, as umbrellas came down and the anxiety level went up.

The closing minutes with a major championship on the line were admittedly uneasy for Lathrop. When the ball came within striking distance of going into their net, Tigers defenders continuously booted the ball back down field to burn the clock and take the Lions out of their offensive rhythm. “That’s where we had to be smart and not give up stupid fouls in the back,” explained Lathrop as the clocked ticked down.

The tightly fought battle going the Tigers’ way means South Pasadena High will forever be known as the 2017-18 CIF-Southern Section Division 5 champs in girls’ soccer. Lathrop knows no one can ever take it away from them.

“They’re the best team, and it’s okay for them to say they are,” said the coach. “They can own it. We’ve been humble, conservative a little bit all year. I can now say this is one of the greatest teams I’ve ever had the opportunity to work with. I’m proud to be alongside of them.”

Look for player’s reaction to the Tigers’ victory in a future article.