Tuesday evening saw representatives of Pavilions speak to the community about the concept and intended plans for the Pavilions at the corner of Monterey and Fair Oaks Avenue. Attorney Paul C. Anderson welcomed the crowd, inviting them to partake in the lovely spread of food while giving an overview of the process that has brought us to this point. That being initial meetings and proposals in 2014, which never came to fruition, and the consolidation in the grocery industry which has now brought us to the current concept and proposal. Anderson then introduced Sam Shink, director of real estate for Safeway supermarkets, and Little & Associates architect, Henry Quan, whose team has designed the concept. 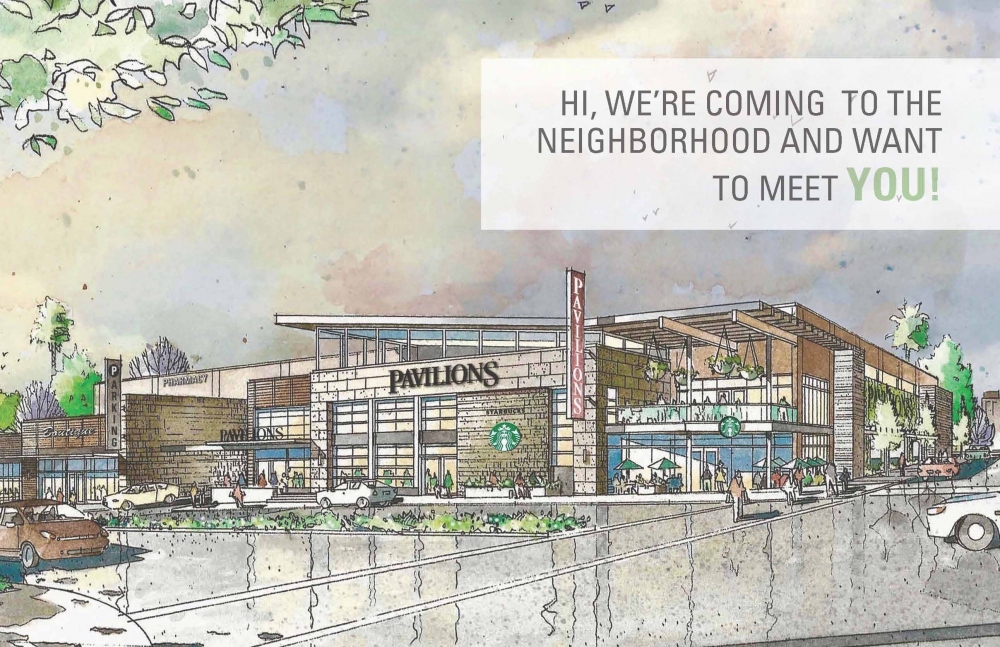 Shink explained that the goal is to partner with the community to bring the residents what they want. He stressed that the design is a concept and that adjustments can and will be made as they go through the process. It was obvious that this process is going to be a pretty long one, not solely due to complete tear down and reconstruction, but all of the reviews, studies and application processes that are involved. They are looking at starting construction in 2019 with about an 18 month build and perhaps opening in 2021.

Pavilions owns the property that it sits on whereas Vons is leasing their space though 2023, so the expansion of the Pavilions to twice its current size would mitigate loss should Vons decide to close that store.

The idea is to make the corner of Monterey and Fair Oaks a much more appealing and walkable street by bringing the storefront up to the sidewalk on Fair Oaks and adding three to four more storefront spaces along the front façade facing Fair Oaks. The parking moves behind and “under” the store, however remaining at ground level. It will be a “podium store” with the entrance at ground level with elevators and escalators taking patrons and carts up to the main floor of the supermarket. Another point of interest is the outdoor seating area, that may be an extension of the in-store Starbucks that would be a new socializing area complete with wi-fi.

People seemed very pleased with the aesthetics and one resident suggested that they continue the aesthetics on the inside as well, a point that was well taken by the architect. The same resident, who has lived on Lyndon for 38 years, raised several concerns over the potential noise that could arise from the proposed new truck entrances and the addition of a throughway behind the store. This concern was shared by the residents who live in the building that is directly adjacent to the back of the current store. That building is going away and will be replaced by some kind of sound wall that, as Shink explained, will be a combination of landscaping and articulation on the building itself. However, directly behind the sound wall will be the new throughway for cars to access the parking which causes some concern for these residents.

Different solutions were discussed such as speed bumps and a stop sign to discourage people from using it simply as a way to pass through but eliminating that entrance would take a complete redesign. However, Quan was very receptive to all the ideas and suggestions presented and both he and Shink were grateful for the feedback.

Shink and his team plans to bring their official proposal to City Council in early 2018. As mentioned earlier, this is going to be a long process and there will be more opportunities for community input.