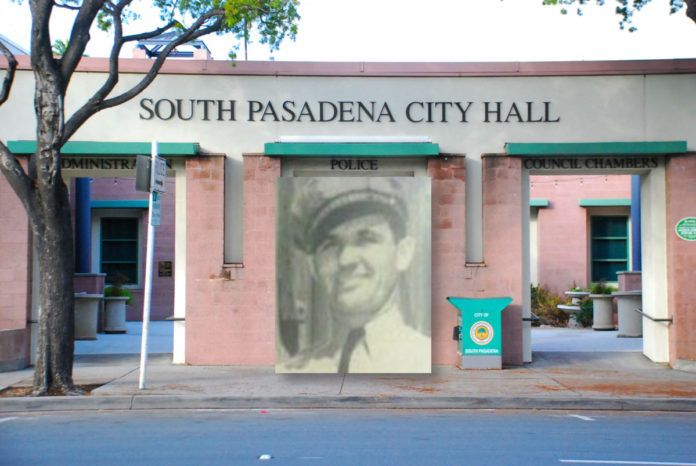 A South Pasadena motorcycle police officer killed 76 years ago will be memorialized this week.

On April 15, 1944, Ray E. Rogers, while on patrol, spotted a speeding motorcycle on the Arroyo Seco Parkway at Fair Oaks Avenue in the city and, according to a newspaper account, pursued the man for seven miles to North Figueroa and Alpine Street in Los Angeles.

Witnesses at the time estimated the two motorcycles were traveling between 65 and 85 miles per hour.

At Alpine, “a curve in the highway apparently threw the South Pasadenan’s machine completely out of control and he was hurled against a power pole,” and Rogers died immediately, noted the article, as his motorcycle came to a rest after skidding on its side.

Rogers, 30, a South Pasadena resident, left behind his wife, Gertina, and two children, Ray Jr., and Carleen, 6 and 4, respectively. He had been a motorcycle officer with SPPD for only nine months.

A bronze plaque on the outside of the South Pasadena Police Station remembers the fallen officer. In addition, his name can be found on the memorial in Washington D.C.

Sometimes it’s a battle between life or death for those in uniform.

“Officers like Ray, put themselves on the front lines of that fight, to preserve that quality of community, and to protect the roots of our greatness,” explained current South Pasadena Police Chief Joe Ortiz.” They exemplify the very idea of residency in this great country – that with our God-given rights come responsibilities and obligations to ourselves and to others.”

Ortiz never met Rogers, however was told his wife once came by the South Pasadena Police Station years ago. Ortiz acknowledged Rogers’ service will always be remembered, saying, “When a police officer is killed, it’s not an agency that loses an officer, it’s an entire nation.”

As he reflects on Rogers’ life, Ortiz was asked, what does it take to be a South Pasadena police officer? “Someone who wants to work for the South Pasadena Police Department must commit to certain principles and values, and use them to guide their actions. An applicant must always behave with honesty and integrity, and have a true compassion for all mankind,” answered the police chief.

Rogers will be remembered on Wednesday, April 15, at around noon in front of the South Pasadena Police Department.

Ortiz would like to remember Rogers through a poem – “To Remember the Fallen” written by Analissa Range: