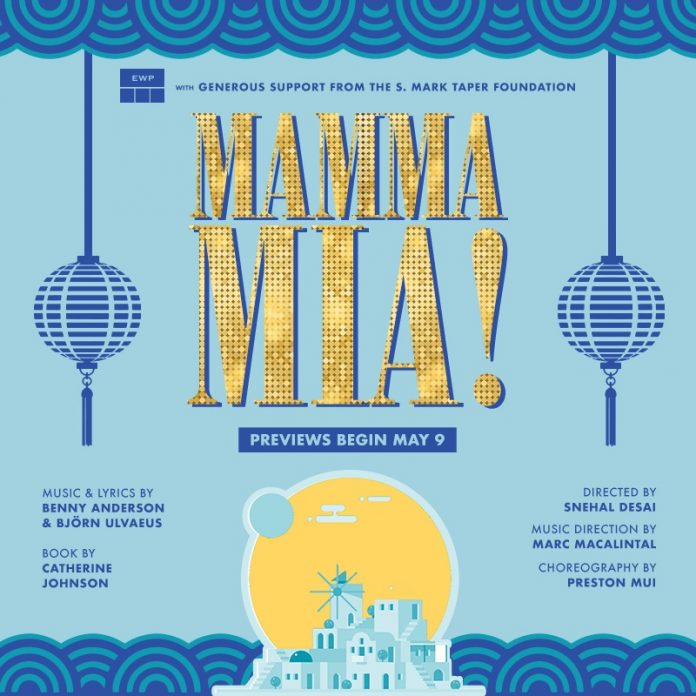 East West Players (EWP), the nation’s longest-running professional theater of color and
the largest producing organization of Asian American artistic work, is pleased to announce the cast and creative team for award-winning Broadway musical Mamma Mia! With music and lyrics by Benny Andersson & Björn Ulvaeus, and book by Catherine Johnson, Mamma Mia! is directed by East West Players’ Producing Artistic Director Snehal Desai, musical direction by Marc Macalintal, and choreography by Preston Mui. Mamma Mia! begins performances on May 9th and runs through June 9, 2019, with opening night on May 16, 2019.

On the eve of her wedding, a daughter’s quest to discover the identity of her father brings
three men from her mother’s past back to the Greek island they last visited 20 years ago.
The storytelling magic of ABBA’s timeless hits sets the scene for this infectious tale of
love and frolicking fun, creating an unforgettable musical experience that will leave you
dancing in the aisles!

East West Players is thrilled to include Mamma Mia! as part of our 53rd Anniversary
Season Culture Shock that is about disrupting the status quo and taking charge of the
“outsider” narrative. “I am so excited to bring Mamma Mia! to East West Players.
Reflecting on the theme of ‘culture shock,’ this unique production will feature a diverse,
Asian American-led cast—challenging the perception of who is perceived as an American
abroad and exploring the culture shock we often feel in our own families generationally,”
says EWP Producing Artistic Director Snehal Desai.

The cast of Mamma Mia is headlined by Joan Almedilla (Lady Thiang on the Broadway
national tour of The King And I), Grace Yoo (Nan Goto in East West Players’ Allegiance),
Alan Ariano (Broadway’s The King And I), and singers, songwriters Jules Aurora and AJ
Rafael. The entire cast is as follows:

All performances of Mamma Mia! will be staged at the David Henry Hwang Theater at
the Union Center of the Arts at 120 Judge John Aiso Street, Los Angeles, CA 90012 in
Little Tokyo. Previews are Thursday, May 9th through Sunday, May 12, with 8pm shows
from Friday to Saturday, and a 2pm matinee show on Sunday. All preview seats are $35. Regular performances are from Friday, May 17 through Sunday, June 9, with 8pm shows from Friday to Saturday, and 2pm matinee shows on Saturday and Sunday. Regular performance ticket prices range from $50 to $75. Opening night is Thursday, May 16th at 8pm. The production runs until June 9th.

Tickets may be purchased online at eastwestplayers.org or by calling (213) 625-7000. At time of purchase please mention any wheelchair/accessible seating needs. Student, senior, and group discounts are available. Dates, details, and ticket prices are subject to change.
East West Players (EWP), the nation’s longest-running professional theater of color in the country and the largest producing organization of Asian American artistic work, was founded in 1965, at a time when Asian Pacific Islanders (APIs) faced limited or no opportunities to see their experiences reflected outside of stereotypical and demeaning caricatures in the American landscape. EWP not only ensures that API stories are told, but works to increase access, inclusion, and representation in the economy.