One of the brightest stars in sports broadcasting, Joe Davis will appear for a Baseball Night event in the South Pasadena Public Library Community Room on Monday, January 29 at 7 p.m.

Joe Davis was hired by SportsNetLA in November of 2015 to serve as the alternate play-by-play commentator for the LA Dodgers during the 2016 season. During that time, he split the role with Charley Steiner for the ballgames not called by the iconic Vin Scully. Joe Davis subsequently was named Scully’s successor for the 2017 season, alongside pitching great Orel Hershiser who adds the color commentary. Houston  Mitchell, Assistant Sports Editor for the LA Times, and topnotch writer of the popular “Dodgers Dugout” online newsletter, will serve as moderator and pose the questions for the discussion. It will be followed by a Q & A with the audience.

Joe Davis is now 30 years of age and lives in South Pasadena with his wife and daughter. A native of Potterville, Michigan, Joe Davis attended Beloit College in Wisconsin where he lettered for four years in football and also served as the team’s two-time captain. Joe quarterbacked the team for his first two seasons until a shoulder injury moved him to wide receiver for his junior and senior years. Perhaps his most important college experience may have come during the off-season when he took on the play-by-play duties for the school’s athletic department and called the baseball and basketball games on local radio and TV.

After graduation, Davis spent three years as the radio voice of the Montgomery Biscuits, an Alabama-based Double A Affiliate of the Tampa Bay Rays.  Then Davis began his meteoric rise through the ranks at ESPN and Fox, where he’s called the MLB Postseason, Big 12 and Pac 12 Football Championships, and dozens of other high-profile events as one of the network’s lead voices.

Joe Davis has revealed in interviews that he didn’t plan to completely emulate Hall of Famer Scully’s style, use his catchphrases, or be considered a “replacement” for Vin. He’s declared that “one cannot replace the greatest anyone of all time in anything.” But Davis has divulged that he wanted to continue the Dodger broadcast focus on storytelling as a reminder of one of Scully’s most famous traits. Joe has recalled that before he started as the Dodgers play-by-play caller, the legendary Scully offered the same advice that his Hall of Fame predecessor Red Barber had given him in 1950: “be yourself so you can bring something to the broadcasts that no one else can.” It’s clearly working, because Davis has disclosed that about 99 percent of the comments he’s received from Dodgers fans have been very favorable.  Joe Davis has endeared himself to not only Dodgers fans, but also to aficionados all over the sports map. The fondness for Joe’s game calling is propelled, at least in part, by his devoted pre-game preparation habits, his keen observation skills, and his distinguished vocal intonations.

The Baseball Night with Joe Davis is ideal for fans of all persuasions and ages, including those who often like to wear bright blue and can hardly wait until next season. Houston  Mitchell, LA Times Assistant Sports Editor and columnist of the insightful, often humorous “Dodgers Dugout” newsletter, will fire the questions and Dodgers Team Historian and South Pasadenan, Mark Langill, will give the introduction.

The Library Community Room is located at 1115 El Centro Street. Admission is free of charge and doors will open at 6:30 p.m.  No tickets or reservations are necessary, but space is limited. Refreshments will be served. Free parking is available after noon at the Mission-Meridian Parking Garage located adjacent to the Gold Line Station at 805 Meridian Avenue. 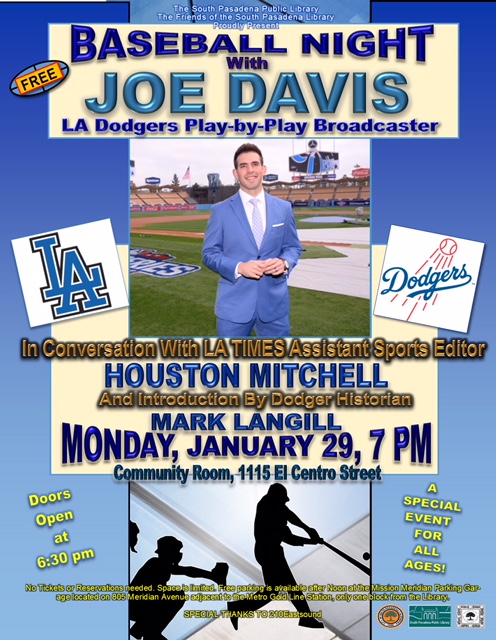