FLY opened at Pasadena Playhouse last week with a stirring production that is a visceral education about the heroic story of the Tuskegee Airmen. In attendance at this West Coast premiere were several of the original 994 pilots which made for an emotional and meaningful night for the cast. This is a powerful retelling of how these pilots were trained against the backdrop of a deeply segregated country and military, how they overcame prejudice and ridicule to not only prove their critics wrong but go on to fly over 15,000 combat missions over European skies. The play follows four of these airmen as we watch them go from cocky, educated young recruits to seasoned pilots as they head into one of the combat missions they were most widely known for; as fighter escorts protecting bombers over Italy, Germany, Austria, Czechoslovakia and all the way to Berlin.

In a masterstroke, director Richard Khan uses the ferocious, interpretive tapping skills of Omar Edwards to underscore the characters’ emotions, giving the entire show a simmering, gut-punching rhythm. The Tap Griot, or storyteller, often gives a voice to what the characters, as African-Americans in WWII, are unable to express. It’s used to staggering effect that pays off in unexpected and profound ways throughout the play.

Special mention must be made of Beowulf Boritt’s set and the whole design team, including Clint Allen’s projection designs which use giant, multi-media screens in the shape of cockpit windows to create a stunning facsimile of flying during the training and combat scenes, played with passion and total commitment by the charismatic, all-male cast. Terrell Wheeler plays “Race Man” Oscar with a quiet dignity and possesses a deep, rich voice that commands attention. Damian Thompson as the eager and ever positive J. Allen from the West Indies has an infectious energy that adds some wonderfully comic moments to the proceedings. W.W. arrives as the smooth talking, zoot suit wearing ladies man and is played by Brooks Brantly with extraordinary charm and style. How the war affects W.W. is a poignant reminder of all these men went through and sacrificed. Chet, the youngest of the group, who we see as an elderly gentleman at the opening and closing of the play, is played by Desmond Newson with aching vulnerability and grace. The cast is rounded out by superb performances by Anthony J. Goes as the conflicted flight instructor, O’Hurley, along with Ross Cowan and Brandon Nagle playing bomber pilots in combat scenes that turn out to be some of the most moving and dramatic. The cast is stellar, the performances are purposeful and the play is 90 minutes of driving, rhythmic emotion that leads to an exhilarating, cathartic conclusion. It’s an education in compassion, patriotism against all odds, bravery and brotherhood. 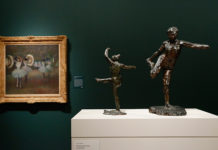 Norton Simon Museum from Home | May 26 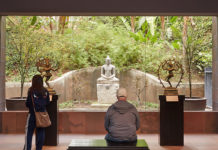 Norton Simon Museum from Home | May 18