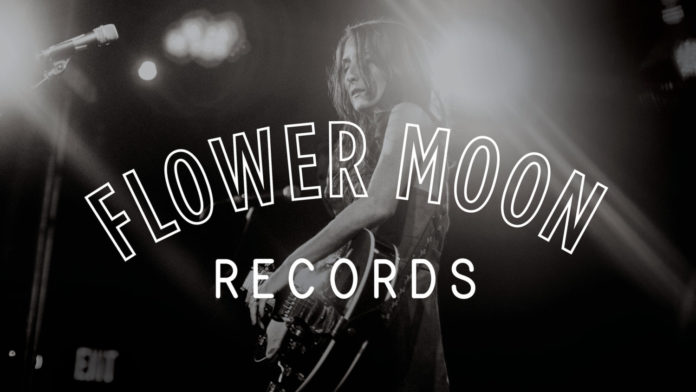 Flower Moon Records is the brain child and dream of South Pasadenan couple Maria Taylor and Ryan Dwyer. They are recording, producing and representing artists right here in the heart of South Pasadena and will be having a showcase featuring Taylor along with Louis Schefano and Brad Armstrong on the Mission Tile West stage at 853 Mission Street from 5-8 pm during the Eclectic Music Festival – April 30, 2022. “It’s going to be the shortest drive to any venue we’ve ever played,” jokes Dwyer, “we’ll literally walk down the street!”

Initially Taylor was asked by Brad Colerick if her band duo Azure Ray wanted to play the Eclectic but her partner, Orenda Fink, was otherwise engaged that weekend, which got Taylor thinking about featuring artists on their record label in a showcase.

“I have such South Pasadena pride – we love it, ever since we moved here, this is now my home and where we choose to raise our kids” says Taylor emphatically. Dwyer chimes in, “we wanted to stake our flag here and show our pride and we want people to know that Flower Moon Records is right here in South Pasadena because we’re proud of that.”

“We just stumbled upon the festival when we first moved here and it was great to see all the live music around town and the art on the sidewalks and all the vendors out” says Taylor. “Our town can sometimes seem “sleepy” – in a good way(!) – but it’s great when it’s alive like weekends like this.”

Flower Moon Records represents as Taylor says, “friends and family, really. We’re just so lucky to have mega-talented friends and family. We started the label with just my stuff. I’ve been on other labels since I was 18, like Geffen, and then at some point in my forties I thought it would be really fulfilling and a good thing to have all of my stuff in one place and have total control over it. And Ryan is a great businessman and it’s been a dream of his to have his own record label.”

In 2016 things aligned – a backlog of Taylor’s catalog had become available – so they started out with her music and shortly after they added Louis Schefano, who, like Taylor is from Birmingham, Alabama. He also happens to be her first boyfriend when the two were teenagers but that’s another story! “He remains a huge part of my life,” says Taylor. “He came to South Pas to visit us a few years ago and also fell in love with it and basically stayed for three years because he didn’t want to go back to New York! So he’s a part of this showcase and he’s so happy to come back to South Pas and visit.”

Flower Moon’s latest addition to the label, Brad Armstrong, will be a part of the showcase as well – he and Taylor have been friends since high school. “He went to Sarah Lawrence and began as a poet and has become an awesome singer/songwriter whose music is poetic and beautiful and I’ve been recently doing a lot of collaborating with him,” says Taylor, “so it really made sense for him to be with us for this.” Adds Dwyer “everyone’s been interwoven and been working together over 30 years. I’m newer to the scene than the rest of them.”

In fact, Dwyer came to all of these music dreams after a very hectic life in D.C. politics, having worked as chief of staff for a U.S. congressman and on presidential campaigns where he had one week off a year. During that one week, in May 2011, Dwyer went to see Taylor’s show. “It was sold out. I paid the bouncer to let me in the back door. I was a fan of her music and the label she was on and the band she was in.” It was Taylor’s birthday so she told the crowd she’d be at a table after the show giving some free merch. Dwyer headed over to wish her a happy birthday and get a CD and he says, “she charged me for it!” Taylor cracks up at the memory explaining, “I guess I forgot I said they were free! It was a little two song sampler so I said, “that’ll be $3” and he said, “what? I thought it was free.” Then he asked if I wanted to get a drink and I said, “no thank you.”

Dwyer continues the story, “I went back to the bar, had more to drink and I went back and asked her again. She said no again. I went back again! I had never done that. When I was in D.C. I just worked.” Taylor was packing up and took pity on him and told her crew she was just going to have one drink with this guy. And the rest, as they say, is history. “That was it” says Dwyer with a wry smile, “we hung out, we made out” – Taylor interjects “he put his number in my phone.” Yes, as we know, they ended up together but not before Taylor theorized that, because he looked like a young hipster, the business card he gave her was his Dad’s –  that his dad was really the chief of staff. He also had lied about his age because he thought she wouldn’t take this 25 year old seriously. But, love prevailed!

Long story short, whirlwind romance was followed by a baby on the way and a move to Birmingham, which involved Dwyer exchanging  his D.C. politico life for a career in marketing. “All of Ryan’s background and experience really brought him to where we are now and makes him a perfect fit for running our label” says Taylor. In 2014, as the couple became pregnant with their second child, they decided to move out to L.A. and a friend told them about this magical little town called South Pasadena. They found a little Spanish home for rent and signed a lease having only seen it on Craig’s List. They arrived in town close to midnight and went straight to bed and “in the morning we went for a walk, went to the park and I fell in love that first day. I remember my heart just beating and feeling this is my home,” says Taylor. “We’re so far from our families but even my mom when she came out said she was still mad at us for leaving but she 100% understands it.” Their two boys are thriving young artists attending South Pasadena local schools. “Literally every experience we have had in this community has just been top notch. I love it.” Echoes Dwyer, “I don’t even want to move off this street, let alone ever leave South Pas!” While they are over the moon about their sweet, little town, they do appreciate that they are Los Angeles adjacent and can take advantage of all that L.A. has to offer, including studio gigs for Taylor. “I’ve focused the last ten years on raising my kids but just being near everything is great. I can say yes to things.”

Taylor’s music journey began in high school with a band called Little Red Rocket and then she started the duo Azure Ray, with Orenda Fink, after losing their band member, Taylor’s boyfriend at the time, to an overdose in their touring van. Out of this unspeakable trauma grew Azure Ray’s painful songs of loss and catharsis. They had no intention of releasing the songs but a rep from a local record label heard them play at a small venue and convinced them to record them. “It was a magical time in our early twenties and we started touring the world and these songs started catching on. It was the most exciting time of my career.”

They toured for ten years. They became synonymous with music that was beautifully painful and emotional. Eventually, they branched out with solo work to explore different sounds with Taylor putting out seven solo records and Fink working with several bands – but the duo continued to come back together every seven years or so to do an Azure Ray record – the latest was put out during the pandemic, “Remedy”. It was the 20th anniversary of Azure Ray and they put the new album out on vinyl, something that Dwyer loves doing. They’ve done color vinyl and there are different versions like “coke bottle” or “white iridescent pearl” that look really cool and they put out vinyl versions of some older records like Azure Ray’s first album. They have a vinyl record that is a compilation of several of Flower Moon artists called “Friends and Family Vol. 1” featuring  Taylor, Fink, Dwyer (yes he’s a FMR artist too!), Louis Schefano, Brad Armstrong, Nik Freitas, Whispertown, Dead Fingers, Dr. Samurai & The Firekeepers, Mike Bloom, Ghosts, High Up, Viva Violet,Taylor Hollingsworth, Umm, and Jake Bellows.

Through her solo work, Taylor explored many genres and seems to have landed firmly at what she calls her true core – somber singer/songwriter. “Those songs always just write themselves and come out of me. Like that was made before I was,” she says. Her music has an ethereal, gossamer sound that gives you that clutch in the chest. Her sweet voice grabs your attention and draws you into the story she’s weaving. It definitely lends itself to the heartache of the human condition and has been featured in shows like Grey’s Anatomy and an iconic scene in “This Is Us” – when Jack is asked to place son Randall on his back for push-ups at his karate studio, it’s Taylor’s “If Only”  that is playing. Cue the tears. As major fans of the show, Taylor and Dwyer were thrilled.

Dwyer manages Taylor and runs Flower Moon Records, “over the years we’ve worked with so many great people in publicity and other areas of the business who are helping us now with our label, so we have a good team,” says Taylor. They really want people to know that they are here – producing records, representing a slate of artists, right here in the heart of South Pasadena. Taylor goes on, “as we grow, we just want to release more people’s records.” Flower Moon Records is indeed blooming.

Taylor just returned from a three week tour through Chicago, Cincinnati, Nashville, Atlanta, and Birmingham which was her first time playing live venues since leaving her world tour from Italy just as the world shut down in 2020. South Pasadenans, along with Taylor and Dwyer, are gearing up for our first Eclectic Festival since 2019 and we are ready to rock!