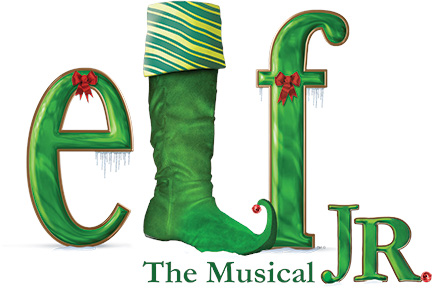 All auditions, rehearsals and performances are at the Fremont Centre Theatre, 1000 Fremont Ave, Suite 100, South Pasadena CA 91030
Below are the character descriptions and synopsis of the story. Here is also a trailer from the full Broadway version to give you a taste of the what you can expect!

Based on the beloved holiday film, this hilarious fish-out-of-water comedy follows Buddy the Elf in his quest to find his true identity.

Buddy, a young orphan, mistakenly crawls into Santa’s bag of gifts and is transported to the North Pole. The would-be elf is raised, unaware that he is actually a human, until his enormous size and poor toy-making abilities cause him to face the truth. With Santa’s permission, Buddy embarks on a journey to New York City to find his birth father and discover his true identity. Faced with the harsh reality that his father is on the naughty list and that his half-brother doesn’t even believe in Santa, Buddy is determined to win over his new family and help New York remember the true meaning of Christmas.

Santa Claus – Santa Claus has a lot on his plate during the Christmas season, and it is starting to show. He is annoyed with the Elves, tired of lying to Buddy and sad that people seem to be losing their Christmas spirit. He is still the same jolly old St. Nick underneath it all, but the job is getting to him.

Buddy – Buddy is the perfect elf! He’s good-natured, he means well, and he’s happy all the time. There’s only one problem. He’s not an elf, he’s an adult human.

Elves – The Elves are Santa’s special helpers who love their job making toys to meet their Christmas Eve deadline.

Charlie – Charlie is in charge of monitoring the other Elves, making sure every present is wrapped and every bow is tied.

Shawanda – Shawanda Is A Dependable And Caring Elf. She Will Do Whatever She Can To Help Out Others, Including Buddy, Even Though She Accidentally Reveals That He Is A Human.

Sam – Sam Is One Of Walter’s Office Staff Who Is In A Bind At The Top Of The Show.

Walter Hobbs – Walter Hobbs, Buddy s real father, is so focused on keeping his job that he is not making time for his family. He can be stern and unemotional at times, but ultimately he learns to recommit to his family.

Deb – Deb, Walter’s secretary, has the big responsibility of keeping her boss and the whole office happy. She does this by sharing her positive attitude with everyone.

Emily Hobbs- Emily Hobbs is Walter’s devoted wife who would prefer her husband to spend a little more time at home. She is a problem solver and an excellent mother who is doing everything she can to provide a positive family dynamic.

Michael Hobbs – Michael Hobbs is the smarter-than-average 12-year-old son of Walter and Emily. He quickly befriends his new adult brother, Buddy, and does everything he can to make sure Buddy becomes a permanent part of the family.

Saleswoman – The Saleswoman is the first person to greet Buddy as he enters Macy’s. She s the consummate sales person: smiling, overfriendly, and always trying to sell something.

Manager – The manager of Macy’s, he s doing everything he can to make sure all the employees stay in line.

Jovie – Jovie works as a store elf at Macy’s, but don t be mistaken, she doesn’t quite exude the Christmas spirit. She’s kind of cynical, a bit tough around the edges, and now the target of Buddy s complete adoration.

Fake Santa – Fake Santa is a poor replacement for the real Santa. He s an employee of Macy s who is a bit rough around the edges.

Policemen – Policeman #1 and Policeman #2 are a friendly pair of cops who return Buddy to the Hobbs household.

Production Dates – December 1-17
There is a Workshop Participation Fee

Rehearsals Schedule – PLEASE NOTE there are rehearsals scheduled on Saturdays and Sundays for 4 weekends before the Tech rehearsals. We will only be scheduling rehearsal on 6 out of these 8 dates – based on the availability of the performers that we cast