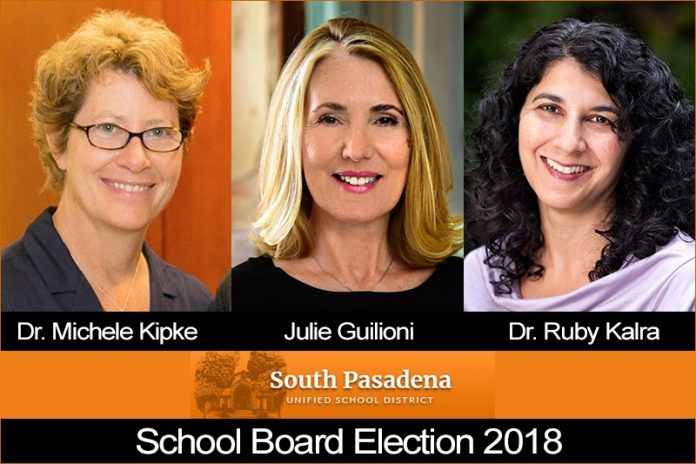 With elections for the school board approaching, local community members have started their bids to secure spots on the council. Of the hopefuls, incumbents Julie Guilioni and Michele Kipke have announced their intentions to vie for reelection. Elisabeth Eilers, the third board member with an expiring term, has announced that she will not be running this fall.

With Eilers’ 13-year career on the board coming to an end, a seat will be open for a new contender in the race. In the field, pediatrician Ruby Kalra has announced her intention to run. Kalra is a long-time South Pasadena resident and a recent recipient of the Golden Apple Award, which recognizes service to the South Pasadena schools. She has had three kids in the school district, and in that time has served as President of the PTA council and Educational Foundation.

Kalra is running alongside Kipke, who is in her ninth year with the board, and Guilioni, who is coming off her first term.

Kipkie is a Professor of Pediatrics at Keck School of Medicine of USC and Vice-Chair of Research at Children’s Hospital Los Angeles. Kipkie is the mother of a recently graduated student and has another daughter in the district.

Guilioni is a principle at Design rounds, which is a renowned learning and development firm. She has also co-wrote Help Them Grow or Watch Them Go, a book about employee development. She has had two children in the school district.

The three qualified community members will have until November, when the elections for the school board seats will take place.