A popular car show in South Pasadena will continue for the 16th year in September with a new twist.

While the 2021 Rose Parade has been cancelled this January, local float builders are already looking ahead to the following year with fundraising efforts.

To come up with the $80,000 to $100,000 it takes to construct South Pasadena’s entry in the worldwide spectacle in Pasadena, members of the South Pasadena Tournament of Roses Committee (SPTOR) hold a series of fundraising events throughout the year, including a golf tournament, raffle for parade and Rose Bowl Game tickets, a year-end Crunch Time Party — featuring dinner, silent and live auctions — and a car show that traditionally attracts some 300 vehicles of all makes and models lined up and down Mission Street in the city one Sunday in September.

When SPTOR officials received word that the next Rose Parade wasn’t taking place due to the coronavirus, they immediately started putting the wheels in motion to raise funds from the Cruz’n For Roses Car Show, now in its 16th year.

Since the event couldn’t physically be held, having to keep the masses a safe distance, organizers came up with a secondary approach that still keeps it on the schedule for September 20 from 10:00 a.m. to 3:00 p.m. and pulls in much-needed dollars to pay for the city’s anticipated 2022 floral masterpiece.

“Due to the limitations of large gatherings and the economic hardships of our sponsors, we are unable to have the actual car show, so this year’s Cruz’n for Roses Car Show will be held virtually,” explained Janet Benjamin, the committee chair who puts countless hours into the success of the event each year.

It’s easy to participate. Simply take a picture of your classic car, describe it in 250 words or less and send them along with a $25 donation to the South Pasadena Tournament of Roses Committee. Entry forms can be found at www.SPTOR.org. All entries receive a commemorative t-shirt.

For assistance and additional information, call Benjamin at (626) 799-7813 or email her at Janet@smmainsurance.com.

“I would like to thank you in advance for your continuous support of this time-honored tradition and I look forward to seeing your smiling face at the 2021 Cruz’n for Roses Car Show!” said Benjamin. “We hope that you will continue to sponsor the South Pasadena Tournament of Roses with your entry fee… and next year, the Car Show will be back bigger and better than ever.”

During the closing ceremonies of the show, trophies will be awarded in six categories – “Most Creative Photo,” “Best of Show,” “Greatest Story,” “Make My Heart Race,” “Takes my Breath Away,” and “Cruz’n For Roses.”

SPTOR President Brant Dunlap is urging the public to “participate in the greatest car show that never was,” asking people to “support and keep our tradition since 1910 of putting a Rose Parade float down Colorado Blvd.”

Car owners near and far can take part, with Dunlap stressing that each $25 donation receives a colorful t-shirt. “Everyone loves to see a cool ride,” he said. “Janet and her team were spectacular in thinking outside of the box and going virtual. What may set us apart from other car shows are live-streamed opening and closing ceremonies, awards and the coolest t-shirt designed yet. It doesn’t matter where you live – just send in your favorite picture, your donation and be a part of a great car show.” 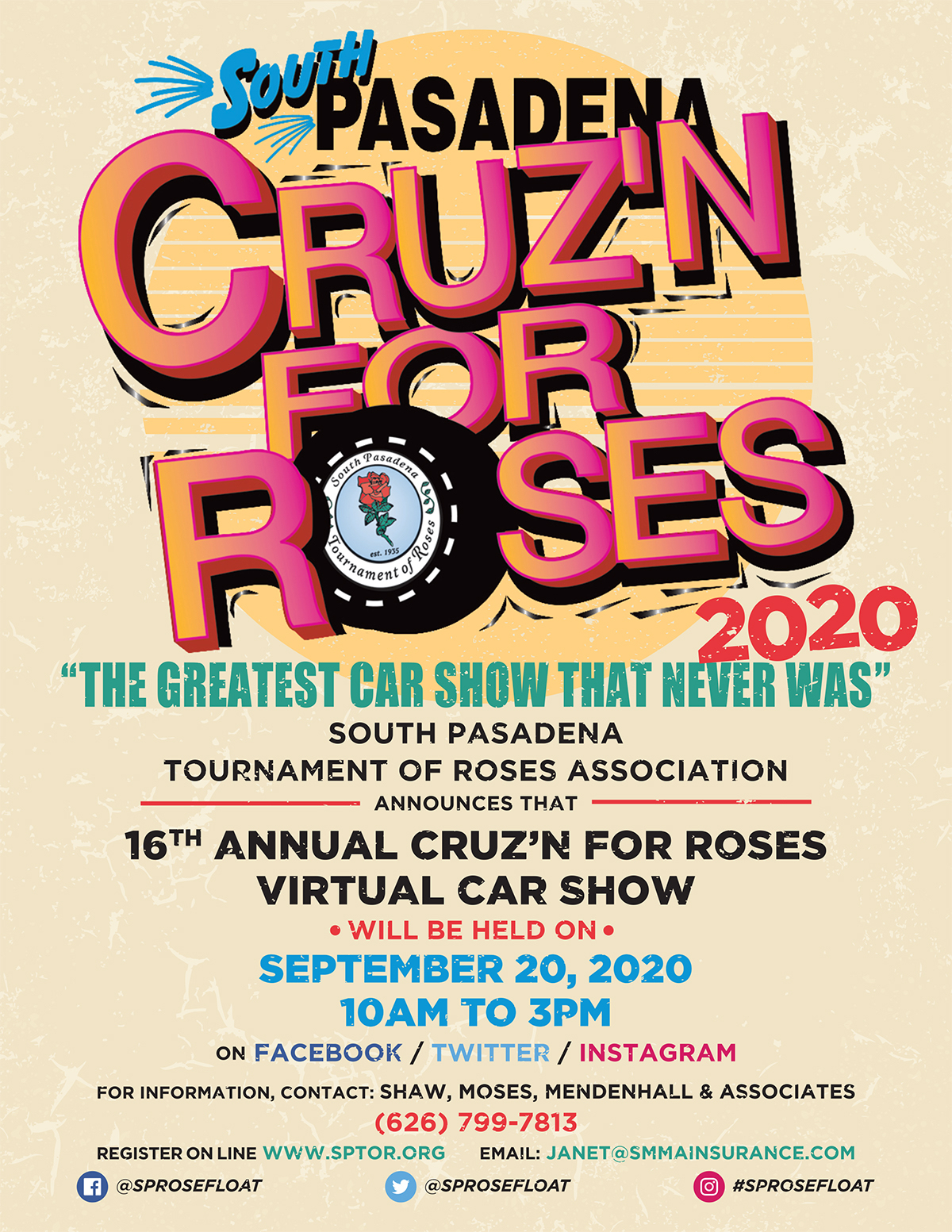