South Pasadena Philanthropists Carolyn and Craig Watson are to be honored Tuesday October 10 as recipients of Pasadena Arts Council’s 2017 Gold Crown and AxS award at Art Center’s South Campus Rooftop Garden. They are being honored along with Pasadena Conservatory of Music Executive Director, Stephen McCurry and David Wilson and the Museum of Jurassic Thechnology.

Since 1965, the Pasadena Arts Council has honored individuals and organizations for their exceptional contributions to our region’s cultural landscape. The 2017 Gold Crown recipients are South Pasadena residents Carolyn and Craig Watson for their outstanding philanthropy and community service, and Stephen McCurry, for his leadership and artistic vision for the Pasadena Conservatory of Music. The AxS Award celebrates the textured conversations between the sciences and the arts that is both emblematic of Pasadena’s history, and equally fused with its future. The 2017 AxS recipient is David Wilson and The Museum of Jurassic Technology.

All proceeds from the event and from donors and patrons will support PAC’s mission to empower artists to invent, inspire, and provoke. PAC  provides resources and opportunities for artists, collectives, and independent arts organizations to advance their visions and contribute to a vibrant, challenging, and inclusive creative community. 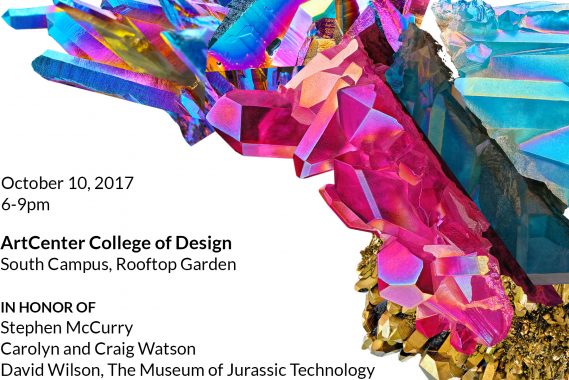 Carolyn Watson is an internationally recognized designer and restoration specialist as well as a dedicated philanthropist throughout the region. In 2015, Professional Child Development Associates (PCDA) of Pasadena, awarded Carolyn their Humanitarian of the Year honors. As further recognition of Carolyn’s specific interests in arts and youth, a group of her friends started the Carolyn Watson Arts Scholarship program at PCDA. This permanent fund provides much needed support, giving families a way to pay for high quality summer and after-school arts programming at PCDA.

In addition to her volunteer work for PCDA, Carolyn serves on the board of the Pasadena Symphony and Pops and is a member of the Fellows of the Huntington Library and the Art Center 100.

Craig Watson served as the Director of the California Arts Council from August 2011 through March 2017. Under his leadership, the budget of the CAC increased from $5 million to nearly $25 million and the Council took on many new initiatives to serve veterans, at-risk youth, after-school arts, and creative placemaking.

More recently, Carolyn and her husband Craig are helping revive the Eastern Sierra Symphony in Mammoth Lakes, California. The symphony brings top students from the Pasadena Conservatory of Music and the Colburn School each summer to play alongside seasoned symphony musicians from several top orchestras. She and Craig are also supporters of Street Symphony, a group of musicians dedicated to bringing life-changing musical experiences to the homeless and incarcerated communities of Los Angeles.

Carolyn and Craig recently started the Watson Design Group Scholarship at Art Center College of Design. In 2016, the Pasadena Branch of the NAACP, as recognition of their combined efforts, gave their highest cultural arts award the Watsons.

Stephen McCurry has served as the Executive Director of the Pasadena Conservatory of Music since 1992. Under his leadership, the Conservatory has grown from a small, local education program into an independent nationally-accredited music school enrolling approximately 1250 student annually and providing outreach programs to an additional 3000 students. Today, PCM offers a comprehensive, classically-oriented curriculum for students of all ages and presents over 100 recitals, concerts and master classes yearly.

David Wilson founded The Museum of Jurassic Technology in 1984, which chronicles an uncommon history of expression and innovation in the arts, humanities and sciences. In 2001 David was the recipient of a MacArthur Foundation Fellowship for his work with the Museum. Much of their programming highlights the intersection of arts, science and individuals, a concept integral to Pasadena’s own DNA.