A one-car collision took out a utility box on the north side of Hope St., between Fair Oaks and Brent Ave. around midnight on Saturday, March 27 in South Pasadena.

Officers on the scene reported that the car was most likely speeding until it lost control on the narrow, residential street, ramming into the box and dealing significant damage to the front end of the BMW-make sports car.

Two people, one driver and one passenger who were both young males, were the only ones involved in the crash. At that time, first responders from South Pasadena Fire Department tended to the individuals but did not report any serious injuries sustained to either the driver nor passenger.

South Pasadena Police Department officers who responded to the incident conducted a sobriety check. The officers did not find that they were under the influence and cleared the check.

Residents in the area had complained online via platforms like NextDoor, saying their internet or cable was out at that same time in the evening on Saturday.

Comment on the Proposed LA County Homeless Initiative Budget | May 6 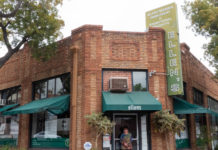 Happy Mother’s Day from the Merchants of Mission St East