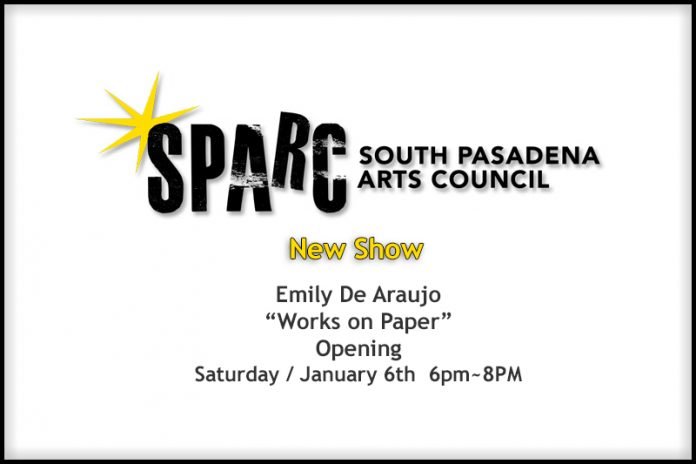 A reception for the artist is scheduled for Saturday, January 6, at the gallery. The exhibition is open to the public through Feb. 23.

For the works in this show, d’Araújo started with leftovers—projects she had abandoned or rejected earlier because they didn’t fit her vision for her work at the time. Her parameters were: don’t buy anything new, work with what you already have. As she worked toward this exhibition, she returned to old drawings and unfinished prints. Stencils and cut-outs, remainders from former collages were her starting points. Her techniques are a natural outgrowth of my printmaking roots, reminiscent of cut-outs of French modernist Henri Matisse.

“Paper is ancient. Paper lasts. It’s relatively inexpensive and viewers are familiar with it,” d’Araújo notes. “I don’t need to work with rare materials or have a specialized practice. […] I used to worry that I don’t have much to say, because I returned again and again to certain images. But […] elements may shift, ideas can be stripped down, reordered or understood in a new way. My characters are clouds, bodies, storms, eggs, roots, bombs. They are not new and my plots may vary little. But for me, they remain charged with possibility and power.”

Emily de Araújo received an MFA from Carnegie Mellon University (2001) and a BFA from California College of the Arts (1995). Trained as a printmaker, her work of the past sixteen years has focused on drawing and installation practices with forays into the use of unusual media, such as tarps, tape and grommets for drawing. Araújo has exhibited work both nationally and internationally.

Solo exhibitions include The Age of Revolution at Side Street Projects, Pasadena; Negative Space at Gallery 825, Los Angeles; Drawings/Text at Stiftung Futur, Rapperswil, Switzerland; Holes and Shadows at the Urban Institute of Contemporary Art, Grand Rapids, Michigan and Dirty Bombs e Outras Idéias at Casa do Brasil, Madrid, Spain. Araújo was artist-in-residence at Mount Saint Mary’s College, Los Angeles in 2006 and at Stiftung Futur in Rapperswil, Switzerland in 2007 and a member of the Los Angeles Art Association from 2005-2010.