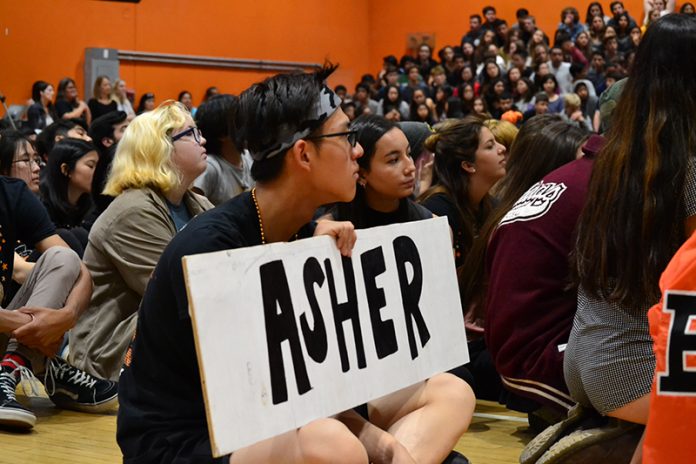 The SPHS band could be heard as far as the parking lot as they did their usual fantastic job of getting everyone pumped for the Farewell Assembly at SPHS gym on Friday morning. The entire student body and teachers filed in to bid a final farewell to the Class of 2017 and to pass the torch to the new ASB officers. Everyone’s hearts were heavy and emotions right on the surface as ASB Commissioner of Assemblies, Charlotte Emerson, took to the microphone to dedicate the assembly to Mr. Jim Asher. The beloved teacher and coach had just passed and the students had decided to prepare some lovely tributes to him at the assembly. Emerson said “the essence of Mr. Asher is uplifting. Those who knew him, knew of his love of musical theatre. He was a deeply caring friend and mentor.” New Commissioner of Assemblies, Anders Keith went on to say, “given Mr. Asher’s love of performance, we know he would have wanted us to have the show go on today, and so we dedicate the 2017 Farewell Assembly to Mr. Jim Asher.” 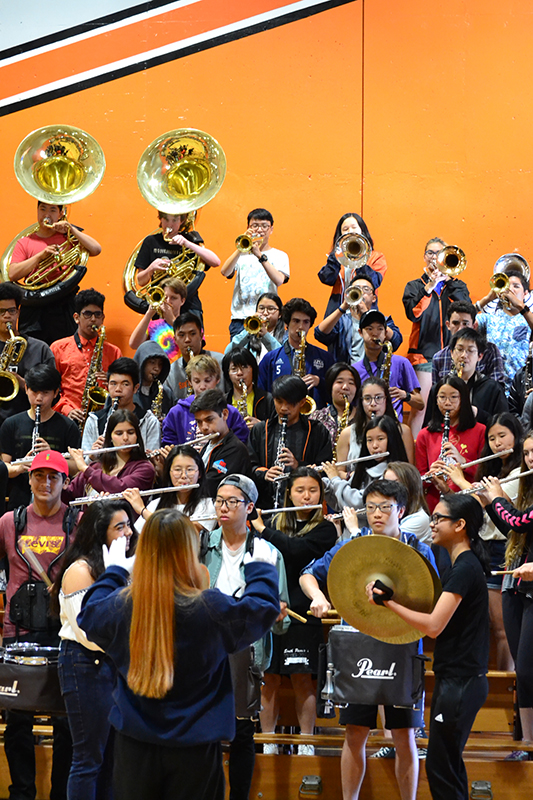 The assembly got underway with lively performances by Pep, Dance, Flags, ASB, a raucous all guys dance as well as heartfelt musical performances from the band The Frozen Gummies, Jio and Tei Park, who sang “In My Life”, Grace Privett Mendoza, Courteny Musman, Van Bactista, Sofia Gerodiez and Cindy Tsai who sang “You Can Count On Me”, and Cynthia Warren and Xander Zooi, who performed “Nostalgia”. Warren says “Mr. Asher always took the time to talk to me and I know I will be influenced by him for the rest of my life.” Lead singer of the Frozen Gummies, Lorie Meza, explained that they changed their song at the last minute to an original piece that was about leaving high school and the regrets we have, saying, “his love of music is what led us to choosing to do this song. You could really tell he loved his job and genuinely cared about each one of us.” 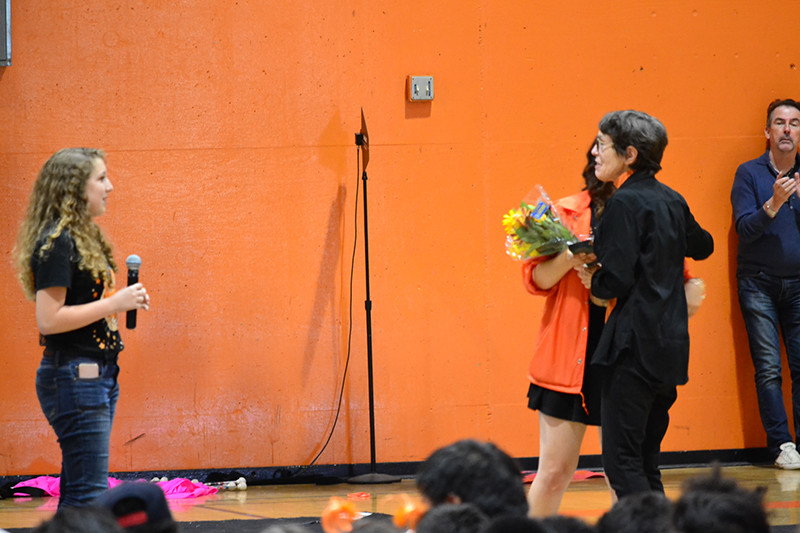 There was also a fond goodbye for retiring French & Spanish teacher Madame Medina, who received a warm tribute, flowers and said, “This is not a goodbye but an au revoir!” Merci Madame Medina!

Finally the current ASB commissioners lined up with torches and each new commissioner was introduced, and after each performed a very involved secret handshake, they were passed the ASB torch for the 2017-2018 year. Last but not least, Charlotte passed the assembly duties on to Anders Keith, who came out in what can only be described as a flourish of disco era magic as he rollerskated around to the roaring cheers of his supporters. Looks like it’s going to be a very fun year indeed for the Tigers. 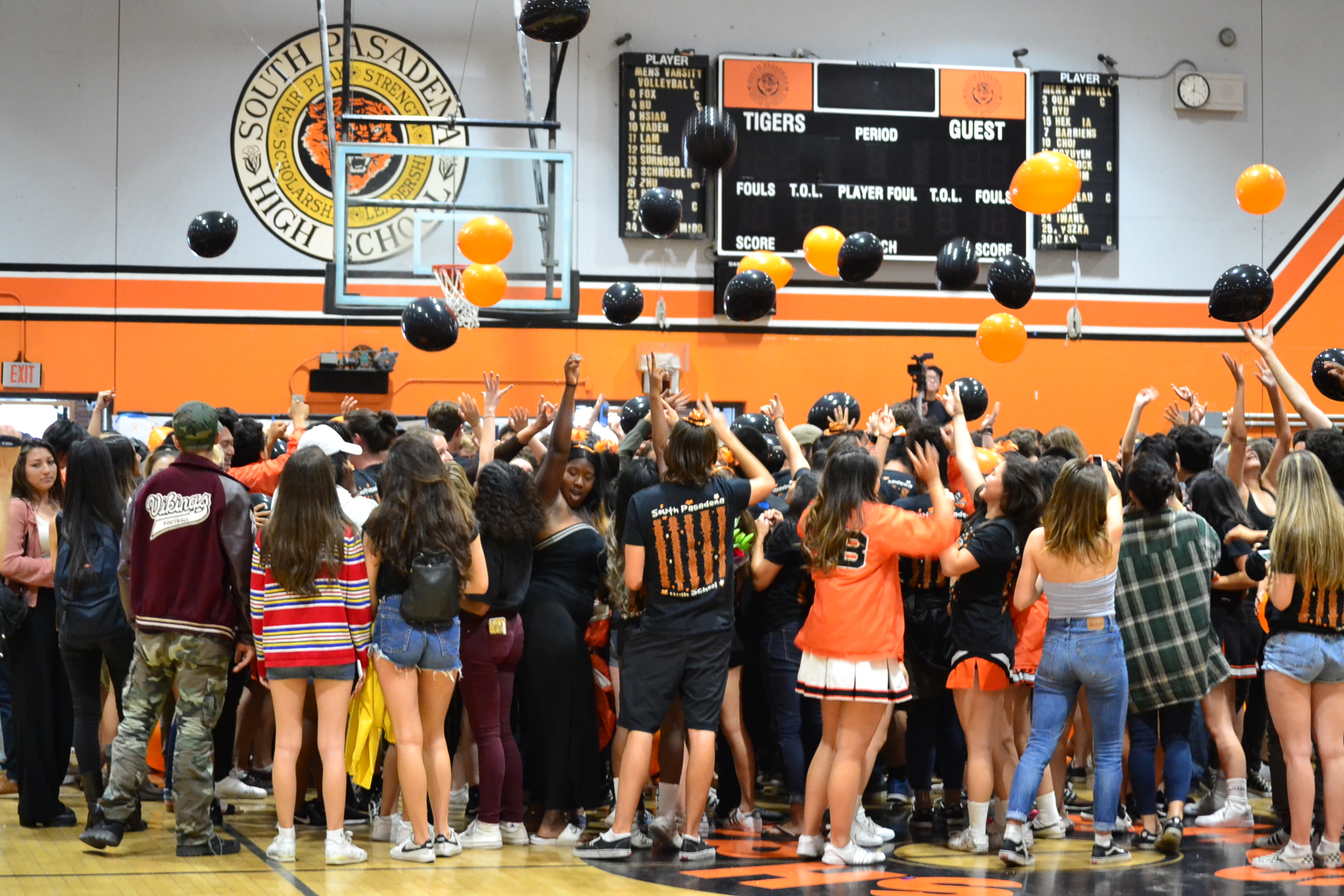 Spirit points were given out and of course the Seniors won as hundreds of black and orange balloons rained down on them in one final shout out to the Class of 2017. Next up for these seniors will be the baccalaureate, the Senior Breakfast and in one week, GRADUATION, which will be held Friday June 9 at 5pm in the stadium. We at SouthPasadenan.com, along with the entire community, wish the Class of 2017 the very best in life! Go get ‘em Tigers!