Stop by the Jones Coffee Roasters patio at 1006 Mission Street for Jazz Wednesdays 5:30pm to 8:30pm featuring the smooth sounds of The Jazz Cartel. We are so lucky to have them playing regularly for free here in town during this time. They will often call up guest singers and musicians to sit in for a song or two so you never know what treats are in store. It’s the perfect sunset into early evening, South Pas moment to take in some jazz while eating Fosselman’s ice cream or sipping an iced matcha as the train rolls by. Don’t forget to tip @thejazzcartel

The Los Angeles Philharmonic returns to Power to the People! in the third episode of its SOUND/STAGE media project of concert films beginning Friday, October 9, at 10am. The concert program opens with Jessie Montgomery’s Banner, performed by the LA Phil and led by Music & Artistic Director Gustavo Dudamel. The concert continues with William Grant Still’s Sorrow from his Symphony No. 1, “Afro-American.” In 1931, Afro-American became the first symphony performed by a major U.S. orchestra, and Still conducted the piece at the Hollywood Bowl with the Los Angeles Philharmonic in 1936. The version of the second movement heard in SOUND/STAGE makes use of a smaller-than-usual ensemble with orchestration approved by Still’s daughter, Judith Anne Still. The concert closes with powerhouse singer-songwriter Andra Day in a performance of one of the unofficial anthems of the Black Lives Matter movement, “Rise Up.” Tune in at laphil.com/soundstage 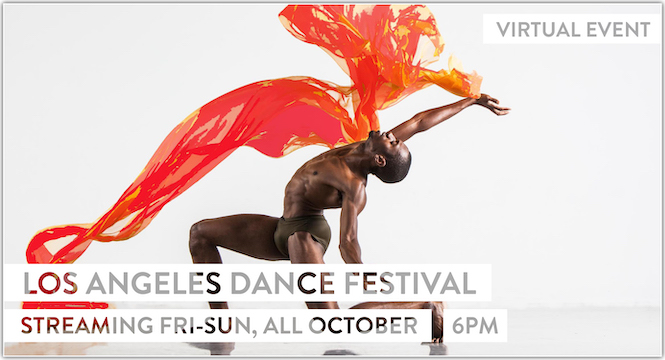 The Los Angeles Dance Festival will be streaming for free every weekend in October continuing this weekend Oct. 9, 10, & 11. LA DanceFest brings talented creators and companies together for twelve evenings of extraordinary works that showcase a wide breadth of dance styles. For over two decades, the Luckman Fine Arts Complex at Cal State LA has presented acclaimed dance ensembles from around the world. The Los Angeles Dance Festival features artists who are recognized locally and internationally for their extraordinary talents. The dancers and choreographers in the festival work in both the concert and commercial industries. Their work is frequently presented on stages, in theaters, feature films, television shows, music videos, commercials, and concert tours. This weekend features works by CyberYOGA, 2DANCECOLLECTIVE, Jana Taylor and Dancers, Ironstone Dance, cyan cian, Luminario Ballet, Versastyle, Mixed eMotion Theatrix, BrockusRED, Danza Floricanto/USA, Lula Washington, Ken Morris Project, Kim Hyunsun, Kim Ok, Yoo Gawon. Tune in at LADanceFest.org

Okay, here’s a fun one for kids of all ages; Bob Baker Marionette Theater’s production of The Circus, now available for streaming through the newly launched PlayhouseLive through Pasadena Playhouse. Filmed in front of a live audience, this happiest of circuses, a brilliant and beautiful musical variety puppet spectacular not to be missed, is available for $14.99 through November 18. As the circus wagons rumble into town, the marionette Ringmaster is proud to bring PlayhouseLive audiences the greatest puppet show on Earth – featuring over 100 of Bob Baker’s exquisitely hand crafted marionettes — where the fiercest and most timid of animals roam, trapeze performers execute daring, spine chilling aerial feats of acrobatics, and the clowns do what clowns do best … it’s super cute and fun!

In the future, PlayhouseLive will bring Hallowe’en SpOoKtAcUlAr and exclusively Bob Baker’s Holiday on Strings directly into homes for the first time.  Head over to PlayhouseLive.org for all information and purchases.

The Stars In The House webseries, usually featuring interviews and musical performances has also been presenting live performances of plays which has been enthusiastically received by critics and audiences alike. Saturday at 8pm EDT and available for four days will be Annette Bening re-creating her Tony nominated role in Tina Howe’s Coastal Disturbances, about romantic comings and goings on a beach in Massachusetts. Bening also directs the reading, which reunites her with the entire surviving cast of the original Broadway production including Tim Daly, Jonas Abry, Jean DeBaer, Angele Goethals, Ronald Guttman and Heather MacRae, joined now by Mary Kay Place and Ed Begley Jr. It is free but donate if you can. Proceeds benefit the Actors Fund. Tune in at StarsInTheHouse.com

New York City Ballet: Three Ballets by Balanchine. As part of City Ballet’s month-long virtual fall season, the company is offering two family-friendly programs as Saturday matinees beginning Saturday at 2pm EDT and available for one week. This first one comprises three ballets by NYCB co-founder George Balanchine:Tarantella, featuring Megan Fairchild and Joaquin De Luz; the first movement of Western Symphony, led by Abi Stafford and Taylor Stanley; and Scherzo à la Russe, danced by Olivia Boisson and Claire Von Enck and students at the School of American Ballet. Tune in at NYCballet.com or on their YouTube channel.