A new uniquely enveloping outdoor soundwalk through Los Angeles State Historic Park, “32 Acres” will be offered July 14 through September 29, 2021, at no cost through a free app in the Apple and Google app stores. Presented by Center Theatre Group in association with UCLA School of Theater, Film and Television, “32 Acres” is available during park hours, 8 am through sunset.

As the city reopens and many Angelenos begin venturing into public spaces again after a year of isolation, immersive artist Marike Splint’s site-specific piece, “32 Acres,” offers audiences a rare opportunity to rediscover how they relate to the city they inhabit. The Los Angeles State Historic Park serves as the enigmatic canvas for a contemplative experience on the character of Los Angeles, its hidden histories and imagined futures while exploring the paradoxes of urban nature. After downloading a custom-built app and putting on their headphones, audiences will set off on a unique journey as their movements through the park conjure sounds and dialogue. “32 Acres” combines original narrative, composition and sound recordings to lead audience members on a guided walk suggesting other ways of seeing and being in our immediate surroundings. Created by Marike Splint, “32 Acres” features original music, sound design and implementation by Jonathan Snipes. The app developer and technical sound designer is Stewart Blackwood with additional sound design and implementation by Tatum Anderson. App user interface and visual design is by Hana S. Kim. Marike Splint is a Dutch French-Tunisian theatre maker based in Los Angeles, specializing in creating work in public spaces that explore the relationship between people, places and identity.

The Los Angeles Philharmonic presents “Peter and the Wolf” narrated by Viola Davis and conducted by Gustavo Dudamel at the Hollywood Bowl on Thursday July 15 at 8pm.

The Oscar, Emmy, and two-time Tony-winning Viola Davis shares her powerful voice when she joins Gustavo Dudamel and the LA Phil as narrator for Sergei Prokofiev’s Peter and the Wolf, which is loved by children it introduced to the orchestra as well as generations of grownups charmed by its melodies and spirit. Dudamel leads Prokofiev’s Haydn-inspiried symphony and selections from Margaret Bonds’ Montgomery Variations. Written in honor of Martin Luther King, Jr. during the Selma-to-Montgomery marches, the Variations are a cycle of spirituals that were lost, restored, and finally performed for the first time in 2018. Tickets at HollywoodBowl.com

Sierra Madre Playhouse is offering the perfect summer entertainment with their outdoor production of “You’re A Good Man, Charlie Brown”, opening July 31, with added performances due to popular demand! The show, co-presented with the City of Sierra Madre, will be performed outdoors in Sierra Madre Memorial Park, located at 222 W. Sierra Madre Blvd. in Sierra Madre. The cast includes Hamilton Davis Weaver as Charlie Brown, Mary Zastrow as Lucy, Marcha Kia as Sally, Luke Sweeney as Schroeder, Alexander Mashikian as Snoopy, and Melvin Biteng as Linus.

Charlie Brown and the entire Peanuts gang explore life’s great questions as they play baseball, struggle with homework, sing songs, swoon over their crushes, and celebrate the joy of friendship. Book, music and lyrics by Clark Gesner. Additional music and lyrics by Andrew Lippa. Additional dialogue by Michael Mayer. Produced and directed by Christian Lebano. Associate produced by  Gary Lamb with  Musical Direction by Sean Paxton and Choreography by Palmer Davis.

Covid safety protocols in effect on opening date will be observed. Seating will be in socially distanced circles, six feet apart, to accommodate parties of two, four, or six. This will primarily be lawn seating (please bring your own blankets), but there will also be circles designated for people who bring chairs. A limited number of lawn chairs will also be available for rent. Circles are now on sale and can be purchased at sierramadreplayhouse.org or by calling (626) 355-4318. Sierra Madre Playhouse’s season for Fall, 2021 will be produced indoors at the historic Playhouse beginning in September. 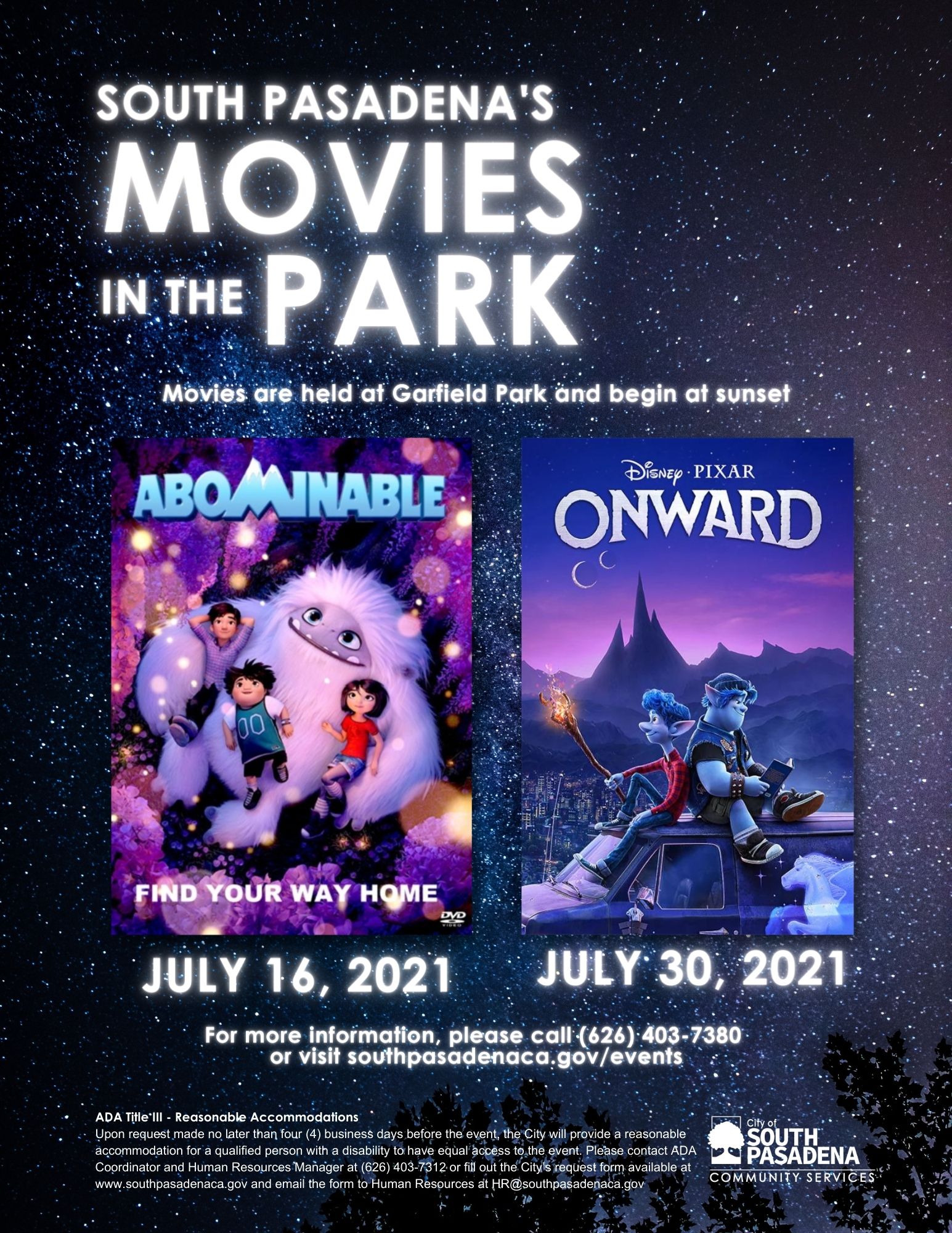 Movies in the Park will be held at Garfield Park in South Pasadena and will begin at sunset. Make sure to bring a comfy blanket and snacks to enjoy these fun films for the whole family. First up is Abominable on July 16. Next is Pixar’s Onward on July 30.

Grand Park’s Portraits of Freedom will magnify the culturally rich and diverse communities that comprise L.A. County with a month-long public art installation that applies an artistic lens to celebrate home and freedom. Through July 31, Grand Park’s Portraits of Freedom: Building a Life in L.A. will feature photography and video exhibitions as well as a nighttime projection installation. Presentations located in pockets throughout Grand Park will feature the work of local artists including photojournalist Samanta Helou Hernandez, documentary photographer Sam Comen, artists Diane Lindquist and Jonah Elijah, social justice organizations Solidarity for Sanctuary and LA Street Vendor Campaign, and California Public Radio’s KPCC/LAist. Located throughout different areas of Grand Park between Grand Avenue and North Broadway, the on-site programming will illuminate Los Angeles through civic pride, identity and engagement while narrating cornerstone stories of the American experience. Grand Park invites Angelenos to submit reflections of “home” to be considered for inclusion in weekly updates to the nighttime projections. More information can be found at july.grandparkla.org. Every day during park hours, 5:30am – 10pm.