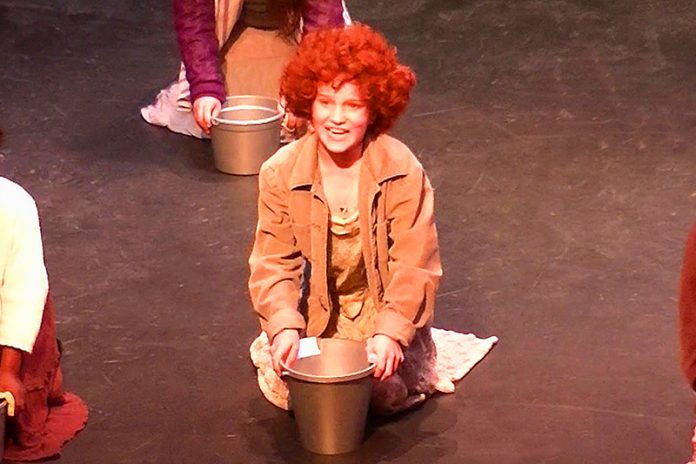 I think most of us are familiar with the iconic images of Annie, the little orphan girl with curly, red hair in the red dress and her stray dog, Sandy. And who can forget the inimitable Andrea McArdle singing out “Tomorrow” on the radio in the seventies? But perhaps many of you, like me, had never seen the full production until recently. I was surprised at how relevant a musical about orphans during FDR’s depression era could be today, and also just how touching this show really is.

The story centers around little orphan Annie who we meet along with a dozen other little orphan girls all living at a New York City orphanage under the direction of a mean-hearted drunk, Miss Hannigan, who sees the girls as her little housekeepers and meal ticket. Annie’s luck begins to change when a local billionaire decides he’s going to take in an orphan for the Christmas holiday and his secretary chooses Annie. The billionaire, Oliver Warbucks, is ultimately charmed by Annie and adventures begin as they try to find Annie’s biological parents and deal with swindlers purporting to be them, including some money hungry relations of Miss Hannigan.

The two casts are full of many, experienced YST members along with several fresh faces, a few who are performing for the first time, although you’d never know it from their enthusiasm and pluck. Marli Fisher is impossibly adorable as Annie, with a smile that lights up the room and whose rendition of “Maybe” will break your heart. Tayla Graham is hilarious as mean Miss Hannigan and she has a great time singing “Easy Street” with the comedy gold team of Matisse Rocca and Aine Lee as Rooster Hannigan and Lily St. Regis.

The rest of the ensemble does a spectacular job juggling multiple roles that are just hysterical with newcomer Marissa McLaughlin playing an inspired double role in both casts. All your favorites are here from the rousing “Hard Knock Life” to the inspiring “NYC,” of course “Tomorrow” and the show stopping “You’re Never Fully Dressed Without a Smile.” Just try not to smile when Daddy Warbucks and Annie sing “I Don’t Need Anything But You” to each other and just wait until you see what little Paxton Kim-Tang and Griffin Downs have in store for you as Sandy the orphan dog.