The event, linking three cities, is slated from 9 to 4 p.m. on Sunday, May 19, is not only limited to cyclists, as participants will also have an opportunity to walk, run, skate, scoot, dance and play along five miles of car-free open streets from South Pasadena’s launching point on Mission Street near the local Gold Line station to the San Gabriel Mission – appropriately giving the event the nickname “Mission to Mission.”

Going the distance or five miles, participants will move east on Mission Street in the city, past Fremont Avenue, Fair Oaks Avenue, and Garfield Park, before heading south on Marengo Avenue, past Monterey Road and Huntington Drive. They will then go east on Alhambra Road, south on Olive Street, take a quick jog over to 5th Street, continuing into Alhambra, east along Las Tunas and south on Mission Drive into San Gabriel to their the final destination.

“It’s going to be fun and we want everyone out there to enjoy a great day,” said Cacciotti, noting that people can start and finish “anywhere they want” along the 5-mile route. Streets will be closed to vehicles throughout the family-friendly event.

Each activity zone will feature a variety of attractions to see and do for participants of all ages, including:

An opening ceremony to celebrate the first ciclovia event featuring the cities of Alhambra, San Gabriel, and South Pasadena will be held at on Mission Street, near the city’s Gold Line Metro station. The event, kicking off at 8:30 a.m., will include special guests, exclusive giveaways, a free bike raffle, 5k Run, and live performances. 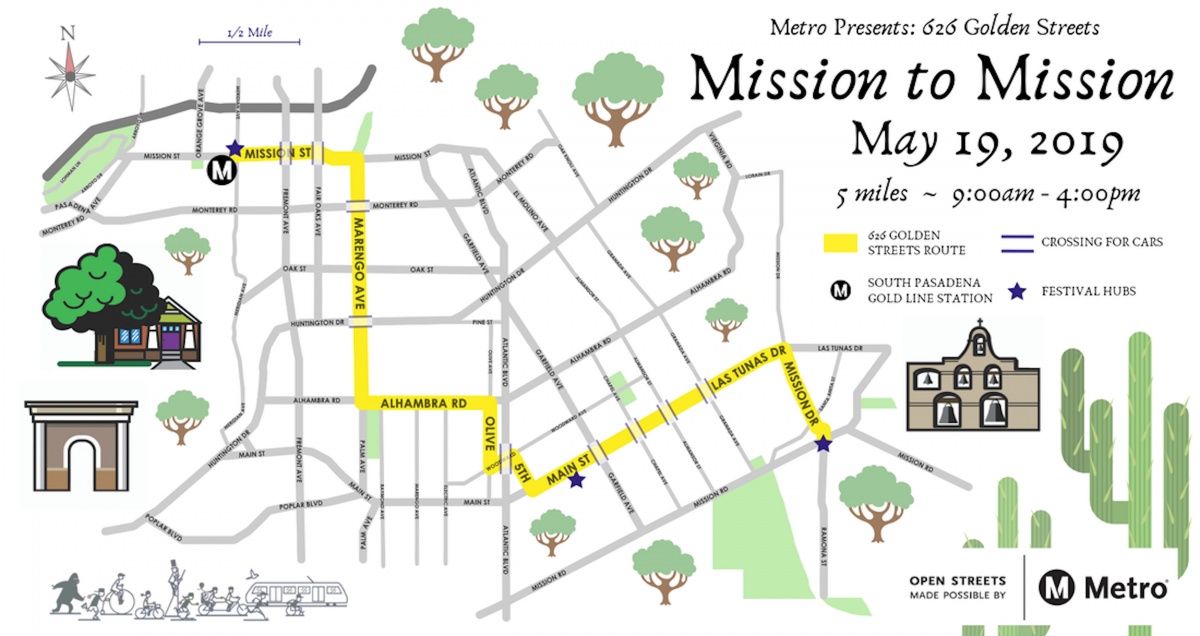 After more than a two-year hiatus the 626 Golden Streets is returning in 2019!

It’s not a race as there are no medals or awards – only miles of smiles on open streets.

“The best part, it’s free!” exclaimed Cacciotti. “People really do have a good time. It should be a really fun event for people to get out and exercise.”