An enthusiastic South Pasadena Mayor Michael Cacciotti says “We’re coming back strong,” as he looks ahead to Fourth of July weekend, kicking off with a special patriotic performance one night, followed by the return of a parade and fireworks show in town the next.

Special this year, inspired from a visit by Cacciotti to the Museum of the American Revolution in Philadelphia last summer, will be a free patriotic theatrical presentation entitled “We, too, are America” at 6:30 p.m. on July 3 at South Pasadena High School. With support from Jim and Lissa Reynolds, who own the nearby Fremont Center Theatre, eight actors, perhaps along with more, will give a series of live performances.

The production will feature a mixture of poems, songs, speeches, and pieces of history written and produced by the local residents as it celebrates the diversity of America.

“I hope the audience finds inspiration in the words and music at this performance,” said James Reynolds, saying it will “highlight the diversity joy and struggle of the American experience.”

He also hopes those in attendance will gain “knowledge of our history, ancestry and diversity of each of us, and our community,” recognizing it “is vitally important for the enrichment to our lives. Join us for this weekend of entertainment that is sure to push you to laugh, maybe cry and walk away with some knowledge you didn’t have when you walked in.”

Cacciotti said the show inside Anderson Auditorium at SPHS presents “a really diverse and collective picture of the multicultural community and nation we live in. It really celebrates the influences of the many cultures that make up our republic.”

The mayor also likes the idea that the event at the local high school is a fitting addition to the long patriotic weekend. The following morning, Fourth of July in town – better known as the Festival of Balloons – will kick off with a pancake breakfast hosted by the Kiwanis Club at the city’s fire station from 7 to 10 a.m., followed by the day’s opening ceremonies on the footsteps of the community room at 10:30 a.m., a festive parade down Mission Street at 11 a.m., continuing with music, games, food and activities at roughly noon in Garfield Park, and fireworks at South Pasadena High when the sun goes down.

With Independence Day put on hold the past couple of years due to the pandemic, the mayor said he looks forward to bringing “our very diverse community together to celebrate our differences, our similarities, because as the title of the event says ‘all of us are America.’ ”

He hopes the production will compliment the city’s long tradition of a pancake breakfast, parade and fireworks dating back to 1982 – 40 years ago. “The Festival of Balloons is put together entirely by a group of volunteers, a well-oiled machine, who coordinate, organize this great event,” said Cacciotti. “It’s really going to be a wonderful weekend with the show at the high school and all that is going on in town on the 4th of July. It’s a full two-day celebration and shows that South Pasadena is all about Americana.”

In addition to the two weekend events, a community read and virtual book discussion, hosted by the South Pasadena Library, will provide a deeper exploration of the holiday with a reading of David M. Rubenstein’s “The American Experiment: Dialogues on a Dream” taking place. According to information provided by the library, “The American Experiment” is a collection “of warm, engaging, and informative interviews with prominent public figures that explore America’s grand experiment in democracy, culture, innovation, and ideas. The twenty-seven interviewees—including Ken Burns, Billie Jean King, Wynton Marsalis, David McCullough, Sonia Sotomayor, and Cal Ripken, Jr.—reveal diverse perspectives on the American dream.”

Displays highlighting the 4th of July can also be found at the local library in the days leading up to the holiday.

To register for the community read and discussion, go to www.southpasadenaca.gov/register 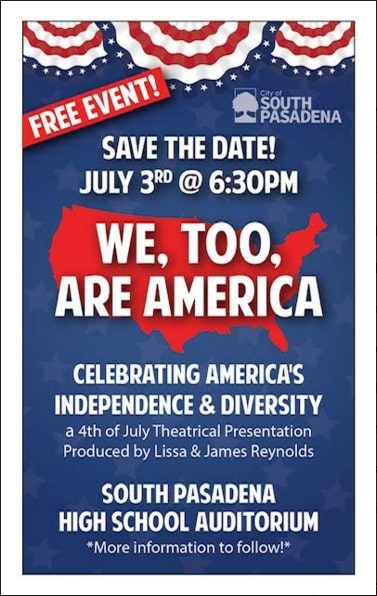