The UUT is a local tax, passed by local residents, used for local services. In 2011, a ballot measure was approved by a majority of voters, reducing utility user’s taxes from 8% to 7.5%, beginning July 1, 2012, and extending the tax for 10 years.

Whether to keep or lose the UUT will come before voters on November 6. City officials say losing UUT funds would immediately place many of South Pasadena’s services at risk. The library, parks and city facilities, all recreation and community services programming will be in jeopardy. Further, officials insist there will be reductions in service and elimination of positions in all departments including in the Police and Fire departments. In addition, the say the street improvement program will be significantly impacted by the loss of revenue.

A recommendation from city staff is for the council to review the fiscal impact analysis Wednesday night and approve in concept the draft implementation plan in response to the potential loss of the UUT.

In other key council action:

The Natural Resources and Environmental Commission (NREC) reviewed the matter at their August 28 meeting. The commission approved the proposed Water Conservation Rebate Program.

The proposed projects include capital improvement projects in the courtyard at City Hall to include drought tolerant landscaping. The program also includes funds for turf removal and landscape transformation of the city median at Fair Oaks Avenue and Huntington Drive.

Fire Department Sharing Resources
The City Council will be asked to approve a Personnel Cooperation Agreement with the City of San Marino for sharing Fire Department personnel resources. The recommendation by city staff is for approval.

From time to time, the South Pasadena Fire Department (SPFD) experiences a temporary and unusually high number of Captain, Engineer, or Firefighter Paramedic vacancies. The vacancies are the result of injuries, illnesses, extended deployments, and vacations. During these times, it is extremely difficult for the SPFD to fill the vacancies with in-house resources.

The proposed Personnel Cooperation Agreement would allow the SPFD, during those times they are experiencing unusual and/or extended vacancies, to maintain necessary staffing levels by pooling resources and utilizing qualified personnel from the City of San Marino Fire Department (SMFD). The SMFD would have equal opportunity to utilize personnel from SPFD to fill their respective vacancies during those times when they are experiencing personnel shortages.

In July 2017, both cities entered into a new two-city agreement for the sharing of a division chief s position. City officials say both cities have worked extremely well together under this new agreement.

In addition to the sharing of the division chiefs position, the SPFD and SMFD currently operate together.

To date, 19 of the primary goals of the Library Operations Study recommendations have been completed, 21 are in progress, and 16 are not finished. Some of those not completed have not been possible, say library officials, because of a lack of funding or other shortages.

Library officials will be asked to provide the City Council with periodic status updates.

In response to public comments received regarding the proposed merger, staff amended their recommendation to postpone the proposed merger by one year in anticipation of the governor signing legislation removing the 710 North stubs from the State Highway Code and to direct staff to introduce an ordinance extending the sunset date of the Public Works by one year.

The South Pasadena City Council voted 5-0 to extend the Public Works Commission sunset date by one year, extend the current terms for the expiring commissioners by one year; and for city staff to bring back recommendations regarding PWC and FTC agenda overlaps.

In addition, the council will be asked to authorize City Manager Stephanie DeWolfe to enter into a contract with the firm for a not-to-exceed $113,416.47 and appropriate $195,000 from the EOC designated reserves to the Emergency Preparedness account.

The emergency center is housed in a conference room with only one large television monitor. It is not equipped with multiple screens to display situation status reports, monitor various media reports and/or display critical maps of the city concurrently to allow for efficient and effective incident management. The allocated funds would pay for upgrades to the EOC.

The City of South Pasadena Contributed to this Story. 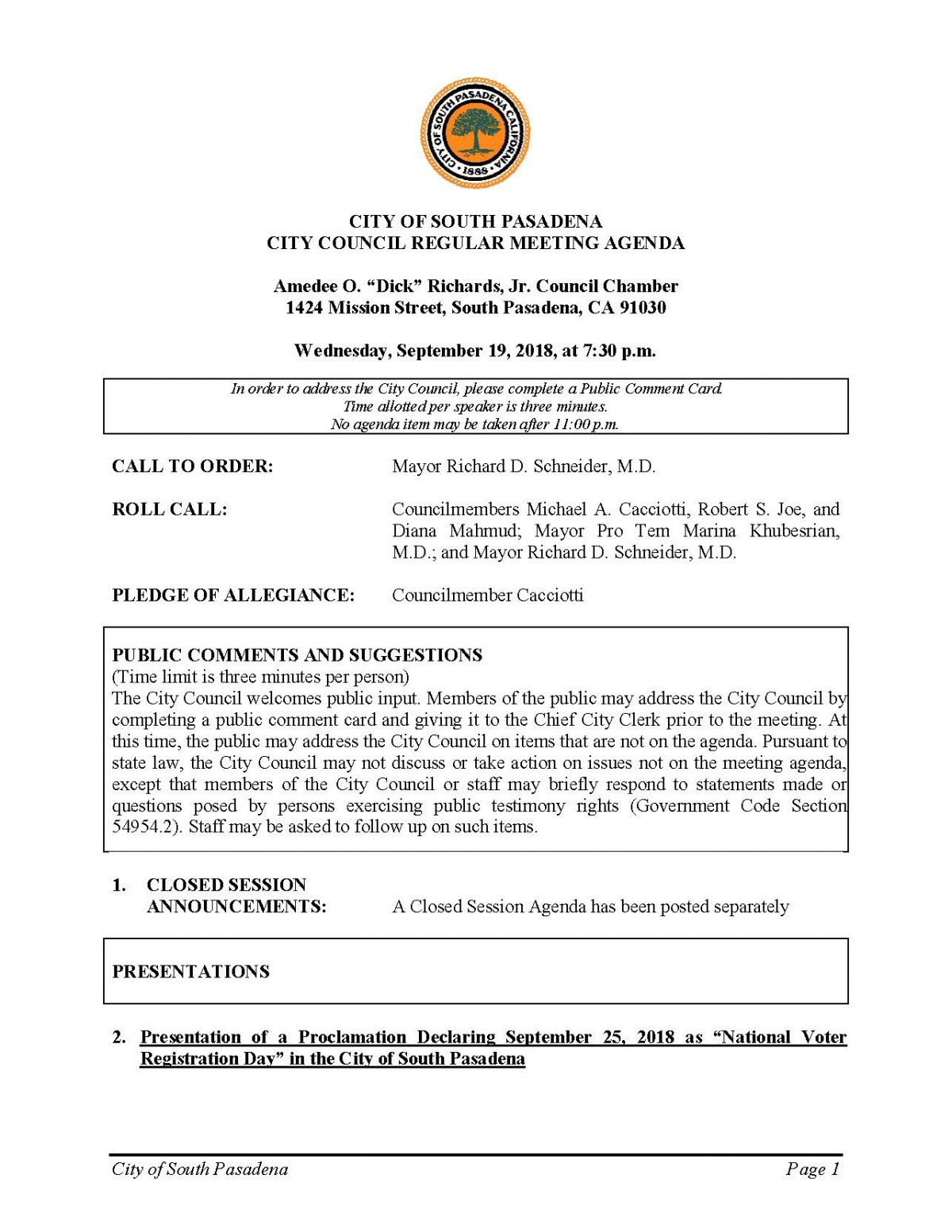 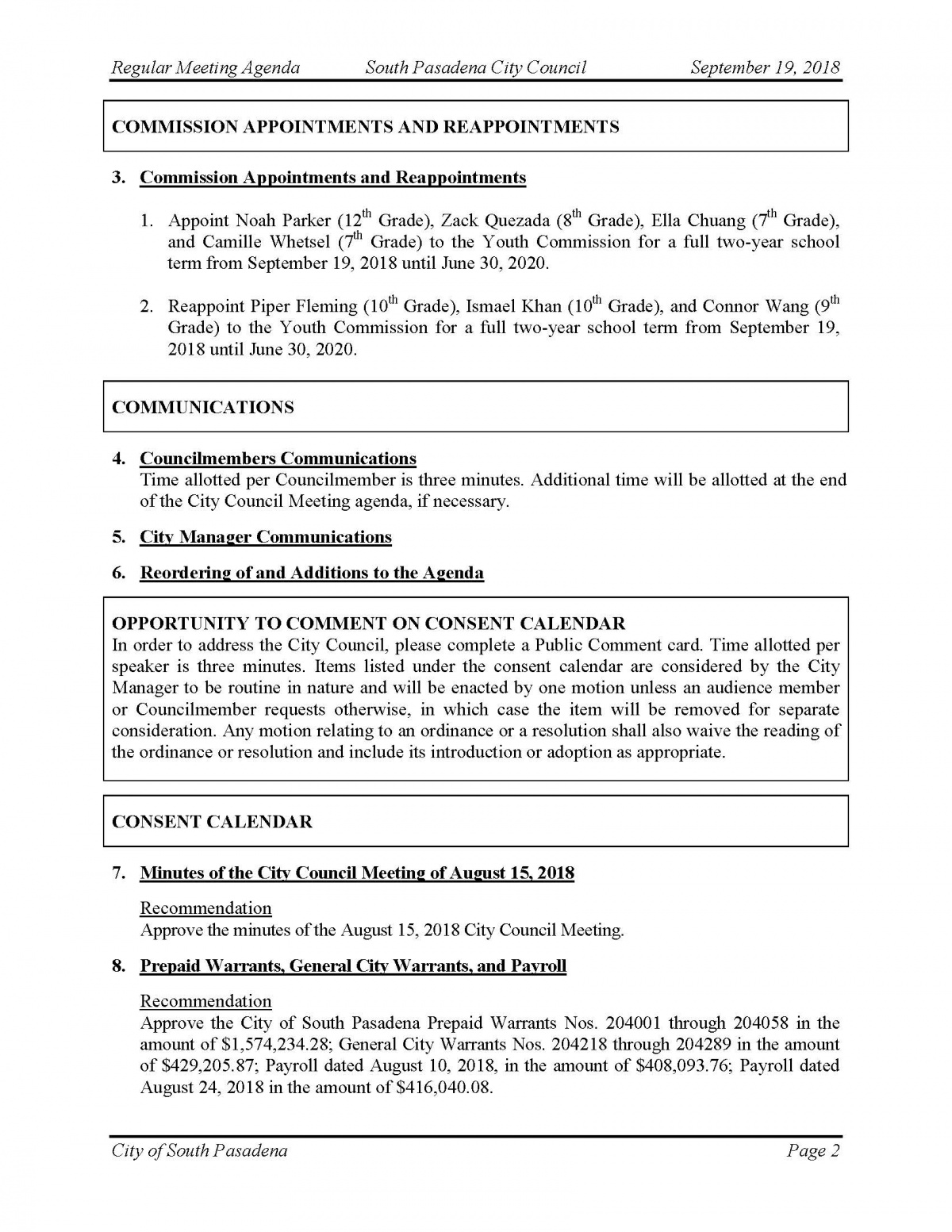 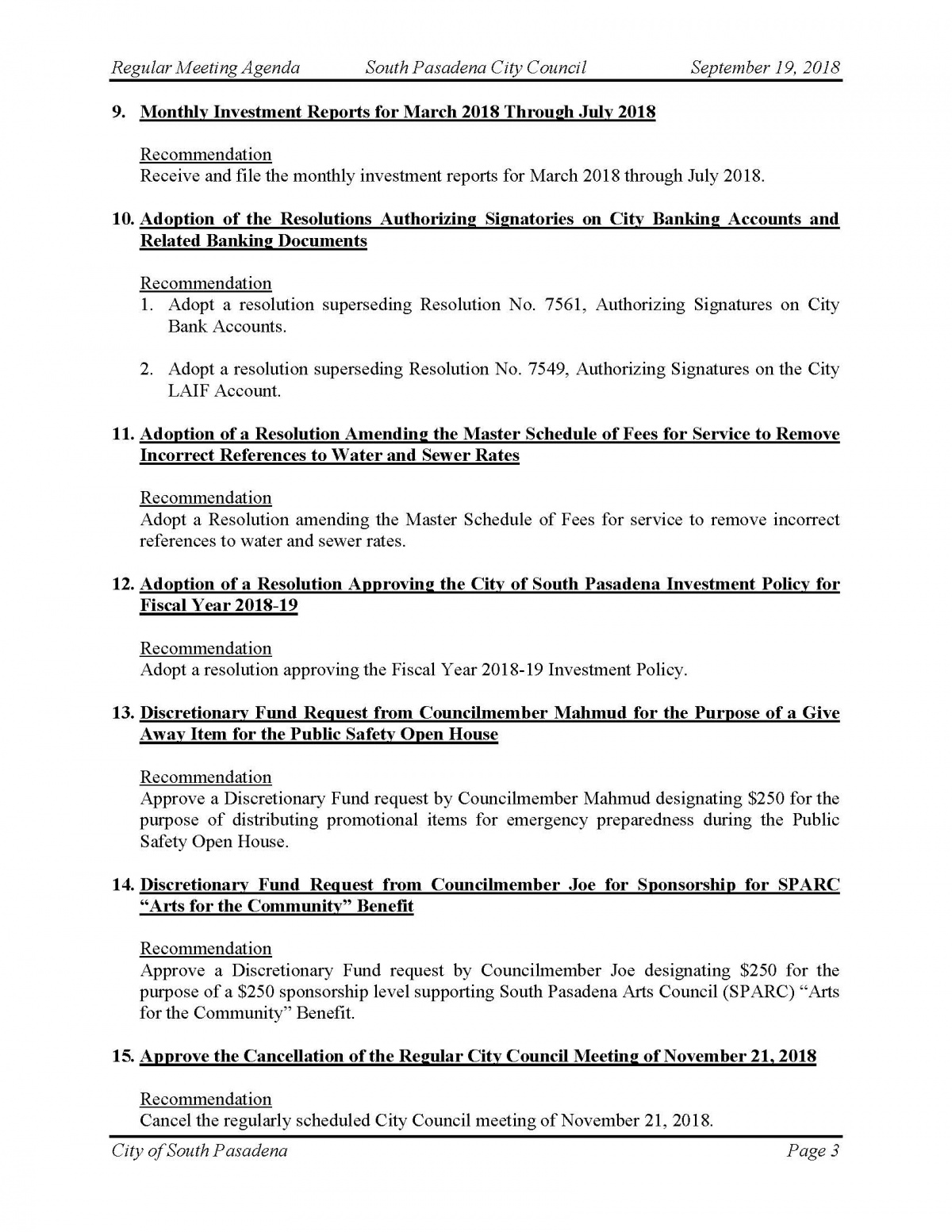 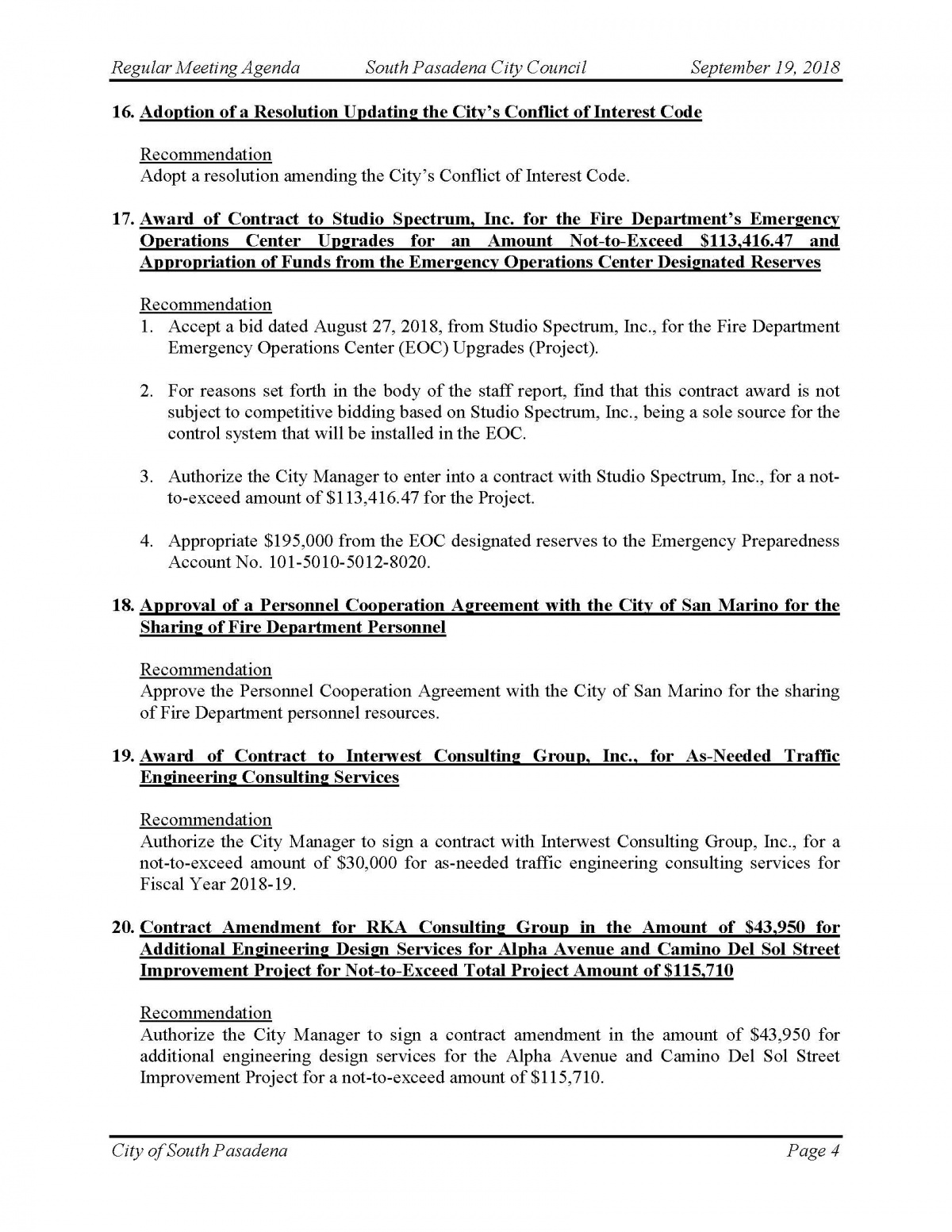 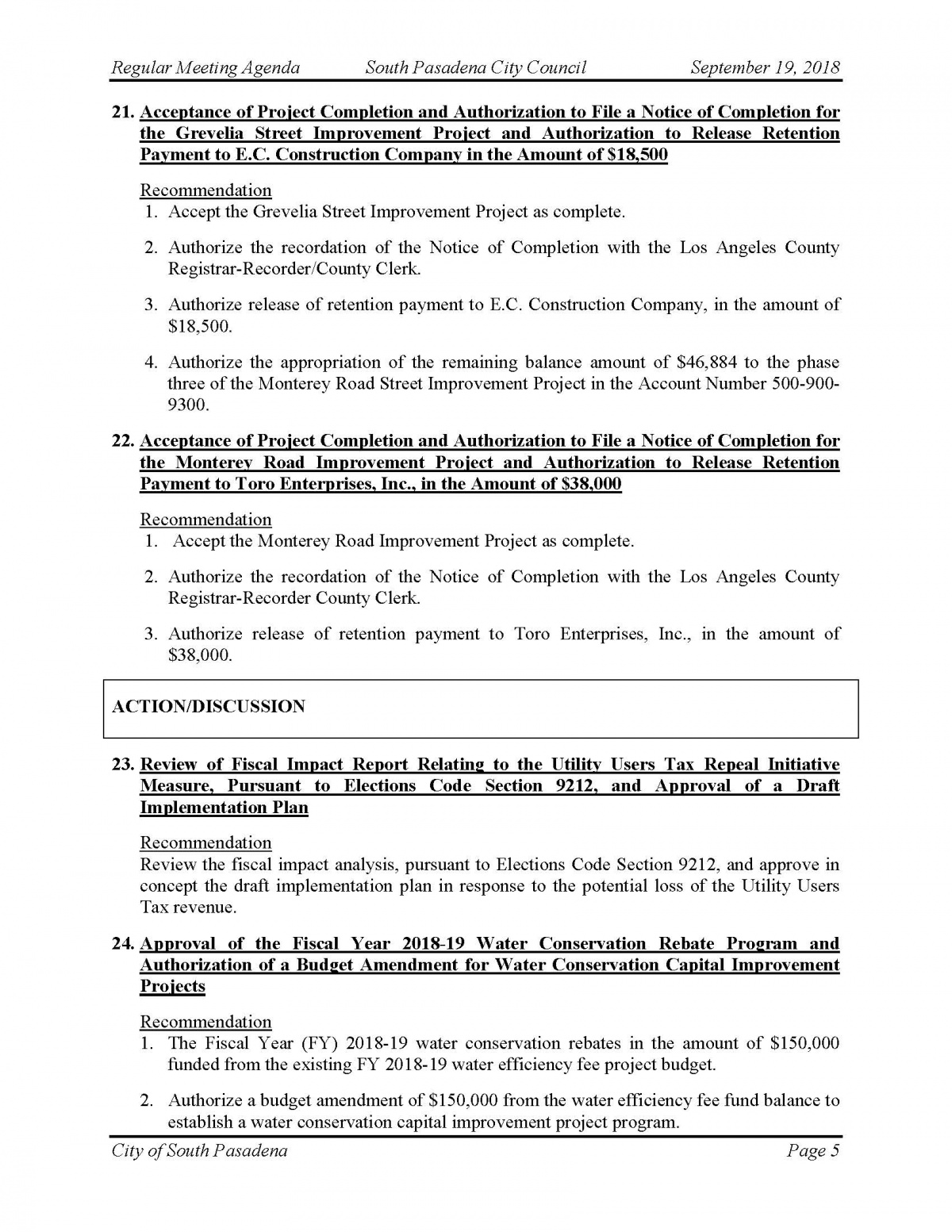 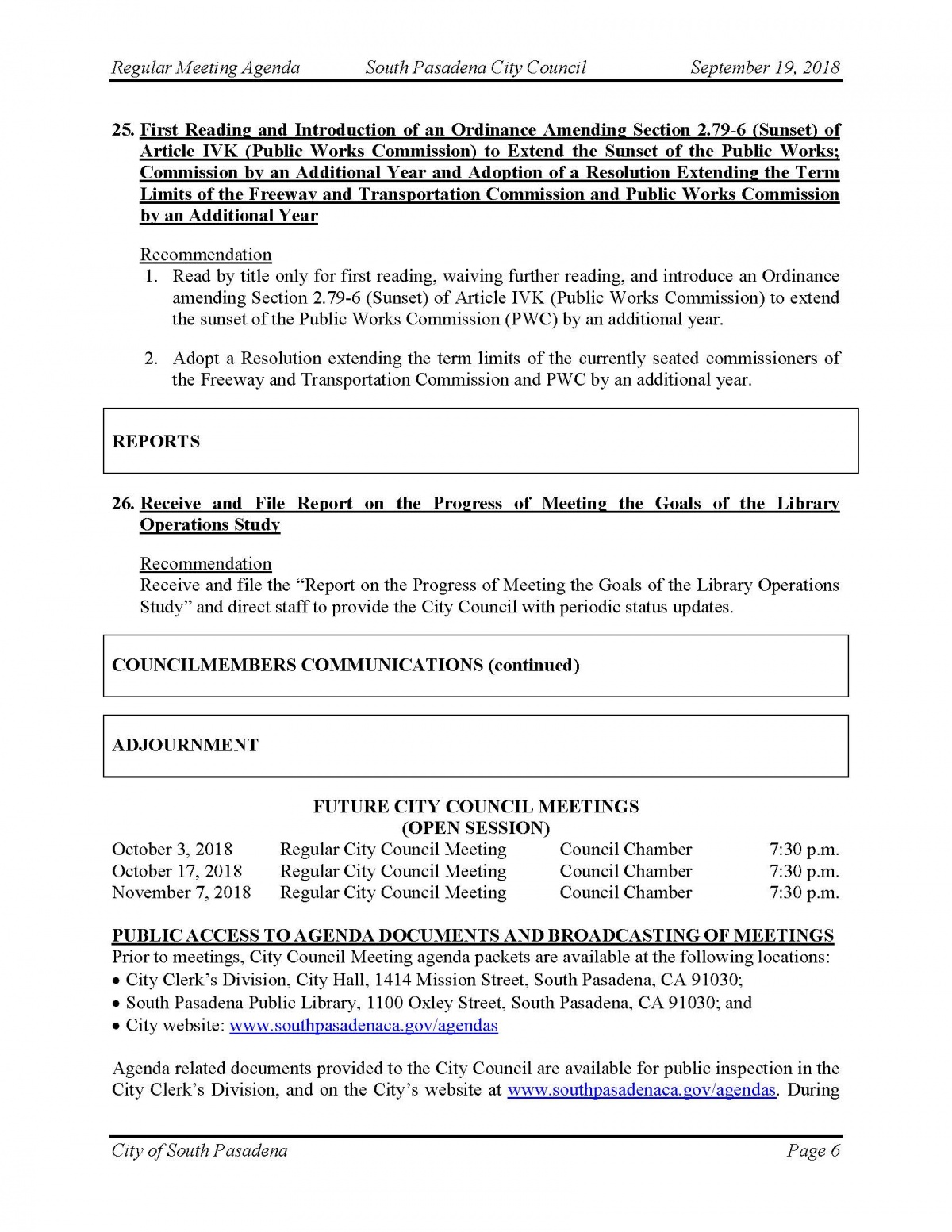 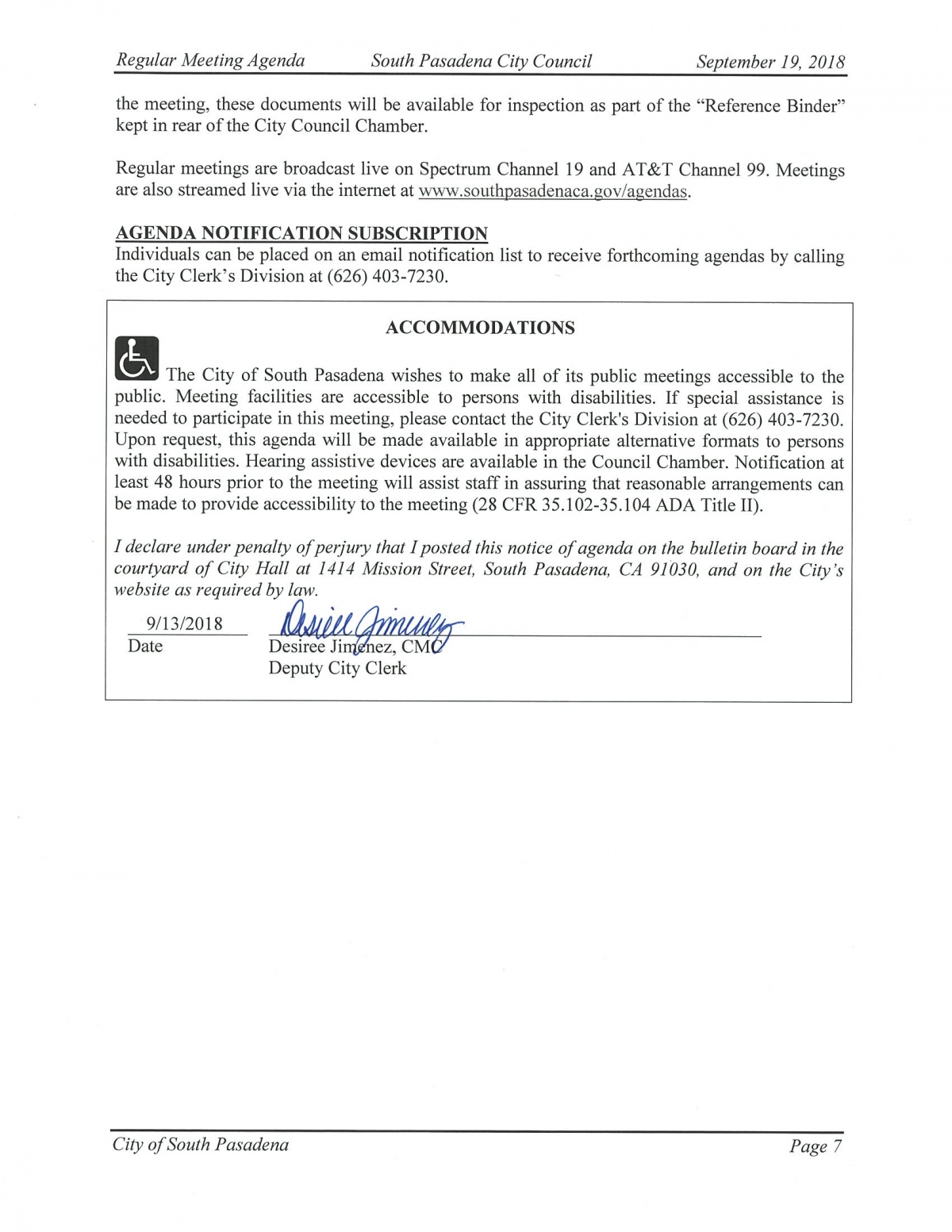